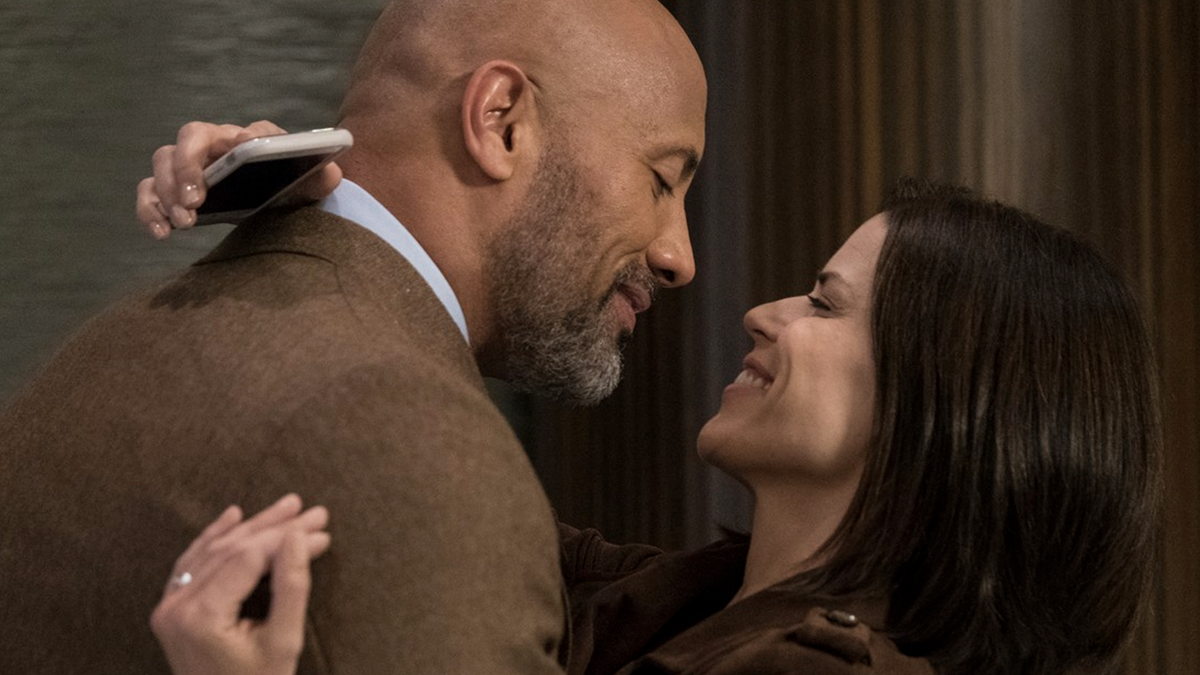 Unless you’ve been hiding in a cave the last decade, it’s virtually impossible to have missed a movie starring “The Rock.” I’ve said in other reviews that I know he goes by Dwayne Johnson now, but to me he’ll always be “The Rock.” Now that that’s out of the way, I can get down to business. In the past year alone we’ve seen him in Jumanji, a movie that’s a video game; Rampage, movie based off a video game and now Skyscraper, a movie that feels like a video game. Sensing a trend? If you’ve missed any of those, he’s a big part of the Fast and Furious franchise and he’s even lent his voice to a Disney movie – Moana. If you’ve managed to avoid him after all that; kudos to you. That said, he’s back in Skyscraper, a movie that takes some not so subtle cues from greater films that preceded it like Die Hard, The Towering Inferno and if you look closely enough, you’ll even get a hint of Orson Welles’ The Lady from Shanghai. Intrigued? Me neither. But I watched it, so I might as well continue.

Johnson plays Will Sawyer, a former FBI agent who, after a botched mission, left him with a prosthetic leg. The silver lining is that he met his wife (Neve Campbell) and the two are now happily married with two kids. Sawyer takes a job in Hong Kong where he consults on The Pearl, a brand new skyscraper which is the tallest in the world. With his seal of approval, they can open up the top half of the building. But we meet a terrorist, Kores Botha (Roland Møller), infiltrates the building and sets it ablaze, Will must do what he can to save the building (and, presumably, the day). And if you haven’t figured it out yet, his wife and kids are stuck inside.

Skyscraper fulfills all the requirements of a summer action blockbuster. It’s got a big budget, “cutting-edge” special effects and should distract you for 100 minutes. We all know what will happen and within the first few minutes, the stage is set. All that’s left is for the viewer to sit back and let the movie take them on the ride. I will say that it’s nice to see Neve Campbell back in films again, and thankfully she’s not relegated to the “wife in peril” role. Her character actually has some dimension. Oddly, the highlight of the film for me was the fight between Johnson’s character and that of Pablo Schreiber. Both men are equal in stature (6′ 5″), so to see these two behemoths go at it, was more fun for me than watching Johnson scale a skyscraper. Finally, director Rawson Marshall Thurber has crafted some pretty funny movies that I’ve enjoyed, mainly We’re the Millers. He’d previously worked with Johnson in Central Intelligence.

This 4K version is one of a few different ways in which to see the movie. It’s also on DVD, Blu-ray and 3D Blu-ray. Either way you cut it (or see it), the 2.39:1 image has some good moments, but also some rather dicey ones too. Since we all know this building isn’t real, it’s a product of CGI, it’s a bit hard t take in. While this Ultra HD image features some truly great moments, I found that some of the CGI effects suffer from an annoying “digital haze,” a quality that makes them seem not clearly defined and artificial. As a result, it interferes with the movie-watching experience. Those that are done right, do give a very nice and almost surreal quality. Detail is immaculate, we see the scruff of his beard and the beads of sweat as he scales the exterior of the building. All in all, not terrible, but for a new to the format film – I was expecting a bit better.

The included Dolby Atmos mix does have a lot more room to play with and the expansive and robust track really fills the air with all sorts of dynamic sound. Vocals are pure and rich, the atmospheric effects seem to permeate the air placing the viewer right in the middle of the action. For some reason fire really seems to sound amazing during films. It plays a major role in the film, as guessed, and the crackle of this element really juices up the soundtrack. The LFE have ample room to play as well. It’s a good, well-balanced mix that’s sure to please.

If you’re reading this or just skipped down this far, then you know (or should have known) what you were in for. Dwayne “The Rock” Johnson’s films are pretty much all the same. I personally find them entertaining, but not to the point of being annoying. I do find it admirable that he’s able to speak with such eloquence as to his role in some of these films. It’d be pretty funny to hear him say “Yeah, I really don’t know what I was thinking here.” Universal’s disc looks good (but not great), but does sound amazing. That and if you can put it out of your head the subject matter, you might have a good time.