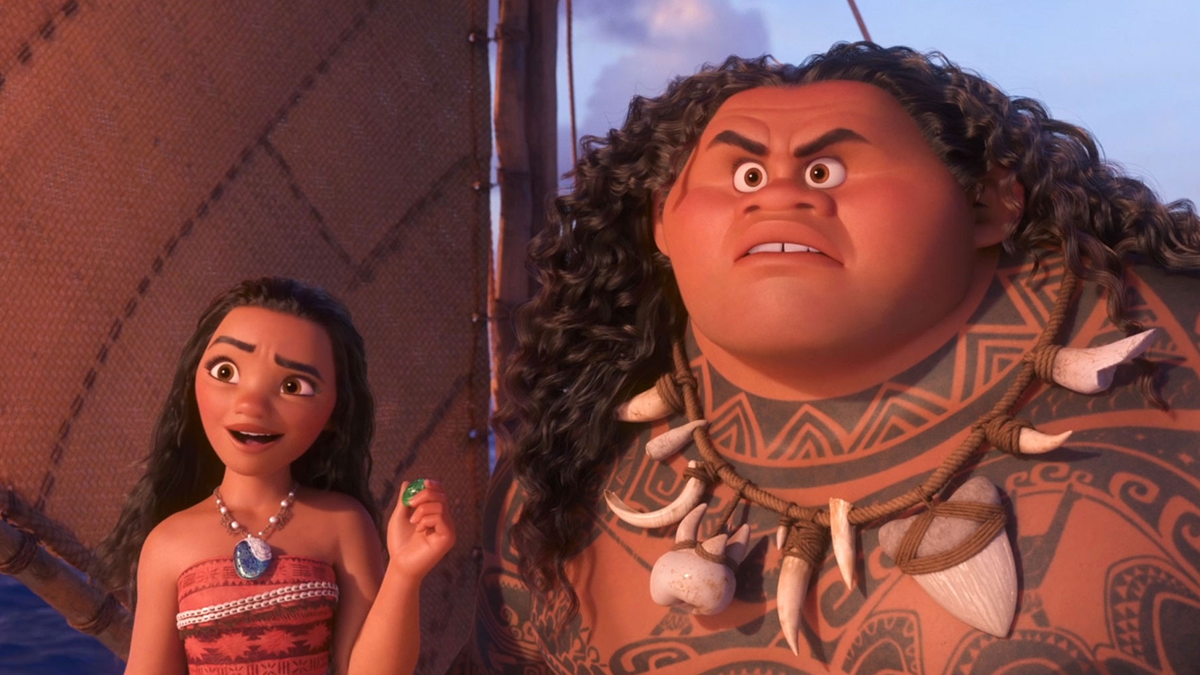 When I think of an animated movie, I’m sure I’ll always think of Disney. From their classic tales like Pinocchio and Snow White to their more modern movies like The Lion King, Disney has been churning out family entertainment for the better part of a century. That’s pretty impressive. As we all know, the computer-animated films have taken control over the last two decades, but Disney has been right there with the best of them. In more recent years, they’ve had some winners with Wreck-It Ralph, Tangled and Frozen. But Moana represents somewhat of a change for Disney (and any animated film) in that the stars of the film are of a Polynesian decent. Let’s face it, there aren’t that many movies, live action or otherwise, that play to this “demographic” so it was a bit of a risk. The question we have to ask ourselves is: did it pay off. It did.

We meet Moana (voiced by Auli’i Cravalho), the daughter of a Polynesian chief. The island she lives on has been affected by an ancient curse which was said to have been cast long ago by a god named Maui (voiced by Dwayne “The Rock” Johnson). And, it would seem, that the only way to stop this curse is for someone to travel beyond the reef, locate said god Maui and force him to return an important stone he stole. Ideally, this would set things right in the world and Moana would live in peace and harmony. Receiving signs from the ocean that she is the one to perform this task, Moana ventures out against her father’s wishes. She meets Maui and the two have a few adventures of their own. I won’t give too much else away, but suffice it to say that they hit it off.

One of the great things about these Disney animated films is that their appeal is equal to kids, but they have enough to entertain adults as well. Just seeing “The Rock” belting out a show tune is enough entertainment for me! All kidding aside, though, Moana does hit all the right notes. It’s got a great message, doesn’t feature a Disney “princess” in a classical sense (though Moana is close) and manages to entertain along the way. Will this be a game-changer? Will this set in motion a new direction for some other films in that the culture is relatively unexplored? Time will tell. One thing is for sure, Disney has not lost their magic touch when it comes to their animated films and Moana delighted along the way.

When it comes to the way this film looks, well it’s second to none. By and large any computer-animated film on Blu-ray will look amazing and some of the scenes in Moana are eye-popping to say the least. The 2.39:1 AVC encode simply dazzles, be it the blue tint of the water, the moving tattoos on Maui’s body (they talk to him) or the eye-catching lava scene near the end of the film. Truthfully, there’s just nothing wrong with the way this looks. I realize that Disney has held off on 4K titles to this point, but I really can’t imagine this looking much, if any, better on that format. Prepare to be dazzled and amazed, because this one is perfect.

When you’ve got “The Rock” singing, I’m willing to bet that you’ll want that included DTS HD Master Audio soundtrack cranked up to 11, right? The sound mix here is equally as impressive as the way this film looks and it manages to check all the boxes. The front stage is very active, but the surrounds do more than their fair share to help keep a the soundstage moving. LFE are involved in several key sequences which makes for a very immersive, directional and therefore enjoyable sound mix. Vocals are rich and pure. I could go on, but it’d be redundant – this one rocks. Pun fully intended.

Moana is yet another jewel in Disney’s crown and this proved to not only be original, but vastly entertaining as well. I was entertained throughout. The Blu-ray both looks and sounds amazing and comes with enough supplements to warrant a purchase. For those 3D fans out there, there is a 3D version which I’d like to get my hands on, but you’re not missing out on much with this one. Highly recommended.