It’s kind of amazing what you remember from trailers shown on TV and what you don’t. For me, I remember Jason Sudeikis doing his impersonation of Bane and the scene in which Jennifer Aniston walks a runway wearing her underwear (hey, can you blame me).  But I don’t really go to the actual movie theater anymore, so when We’re the Millers showed up, both those images came back to me in a flood.  Right. Anyway.  Having said that I suppose I could approach this introductory paragraph in a variety of ways, so I’ll go the Friends route.  It’s been nearly two decades since we were introduced to the “gang” and while all were household names (and still are) it’s really Jennifer Aniston who had found more success after the show ended than any of the others.  It might be argued that Aniston does a variation of “Rachel” in pretty much every movie she’s in and if that’s the case – well I’m guessing she’s laughing all the way to the bank.  Truthfully her character here is a more raunchy (she plays a stripper) than any I can remember her in, so if she’s willing to take the risk than so am I.  Let’s dive in.

David (Jason Sudeikis) has a pretty easy life.  He’s single and, well, a drug dealer.  He deals in weed and doesn’t sell to kids – more along the lines of “business professionals” and housewives.  But all that changes when he’s mugged and loses all of his product and, more to the point, money.  His supplier of sorts, Brad (Ed Helms) has a plan to erase the debt: go to Mexico, pick up a “smidge” of product and bring it back home to Denver. Easy, right?  Right.  David fears that if he goes alone, he won’t survive so he concocts a plan to pose as a family.  He manages to lure Rose (Jennifer Aniston), a stripper who needs the money, Casey (Emma Roberts) a local runaway and neighbor Kenny (Will Poulter) to serve as his makeshift family.  As we can imagine, things don’t go as planned and matters go from bad to worse when they meet up with Don and Edie (Nick Offerman and Kathryn Hahn respectively).  Oh Don’s a DEA agent, by the way.  But this is a comedy, albeit a raunchy one, so will the “Millers” make it home safe and sound or are they destined to meet their fate at the hands of Mexican drug lords?

The movie was actually a surprise hit of the Summer, grossing nearly $150 million domestically and it cemented the fact that Jennifer Aniston is the real deal.  Granted, she had a pretty amazing ensemble cast to back her up.  I’ll say that the plot was a bit predictable, but there are some scenes that are pretty unforgettable.  Think of the movie as a cross between The Hangover and Midnight Run.  Now despite the “family” theme of the film, I will say that this is a pretty lewd movie. I didn’t really mind so much, but if you’re thinking of sitting down with the kids and giving it a view – you just might want to think again.  There are several scenes that are pretty questionable with man on man insinuation , woman on woman things and full frontal male nudity.  Not bothered by any of that?  Well ok then, give it a shot!  I will say that there are a few shots of Aniston in next to nothing and having never been too much of a fan of hers I will say that she looks pretty darn good for a woman of 43.  I think a body double might have been used in a few shots, but there’s a few scenes when it’s really all her.  So…enjoy!

The film comes to Blu-ray in a 2.40:1 AVD HD image that’s certainly what we’ve come to expect from new to Blu-ray films.  Colors are bold and brash, contrast is rock solid, black levels as well – it’s almost like these new movies are on autopilot of sorts because they all look so damn good!  Hey, I’m not complaining here as it certainly beats the alternative.  I neglected to mention the attention to detail – again, as we might expect, it’s amazing how much we actually get to see.  And when Jennifer Aniston is doing a strip tease while swinging on a pole – you want the clarity to be there. Right?  Anything further I say will be overkill so let me just say that this, like so many others, looks the part. A nice job.

The movie comes to Blu-ray sporting a nice DTS HD Master Audio mix.  By and large, comedies aren’t much for dynamic audio and while the film has a few moments of glory, this steers pretty much the way that other comedies do.  Having said that, vocals are crisp and robust, surrounds are used a good portion of the film and I think I even caught the LFE chime in a few times.  Most of the gags are physical in nature, so the action’s on the screen.  Suffice it to say there’s nothing especially memorable about this mix, but it certainly gets the job done.  I will say that I’ve a newfound respect for TLC’s “Waterfalls” – there’s a scene that’s just, well, unforgettable.

We’re the Millers comes to Blu-ray with a nice selection of extras, the most notable of which is the additional 9 minutes added into the film.  Here’s a rundown on the rest:

The Miller Makeovers – A look at the opening wardrobe and the resulting changes of the characters’ outfits as the movie progresses.

Road Trippin’ with the Millers – We get some insight as to what it’s like being “on the road” in an RV, shooting in it and the like.

Don’t Suck Venom – Will Poulter talks of “the scene” in which he gets bitten by a spider and the resulting…scene.

Getting out of a Sticky Situation – Luis Guzman tells of his cameo appearance. The less said the better.

I am Pablo Chacon – Who is Pablo Chacon?  Evidently everyone in the movie.  Seriously though, it’s the guy with the curly hair.

Rollin’ in the RV – We get a look at the tricked out RV that the family calls home. 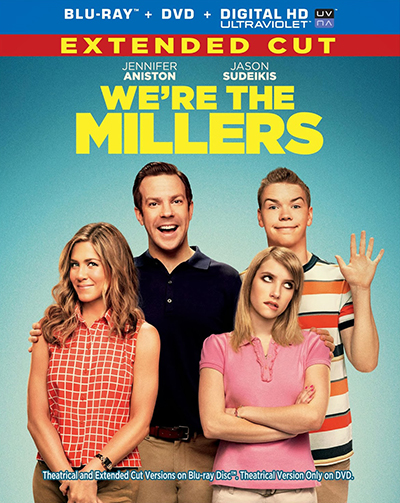