Films based on video games don’t exactly have the best track record. Dwayne Johnson himself starred in 2005’s dreadful Doom, but he’s a considerably more reliable star in 2018 than he was back then. Truth be told as well,Rampage is simply a lot of fun if you go in with the right mindset. It’s a fun time at the movies and has the common curtesy to not take itself too seriously, a fatal flaw for a lot of films of this sort. When I saw the trailers for this, it looked like some generic King Kong rip-off. I had never heard of the video game series, but the premise still looked mildly intriguing.

We meet Davis Okoye (Johnson), a former US Special Forces solider who is also a primatologist and head of an anti-poaching unit. Davis takes to George, he’s a rare, albino gorilla that Davis rescued, and they formed a special bond. There’s an unfortunate incident in space that leads to falling debris where one of them lands in the everglades. A wolf is exposed to the pathogen. There’s also a canister that lands in George’s habitat, exposing him to the pathogen as well. Before long, George grows larger and larger and more aggressive as well. Eventually it’s revealed to Davis what went wrong, and why George is growing at a rapid rate. Davis and George have a good rapport, communication via sign language and playing jokes on one another. Unfortunately, it gets to the point where George has become much larger and more aggressive, with Davis unable to control him. Soon, the Government gets involved, trying to control things as they often do in these films. Jeffrey Dean Morgan shows up as an agent who works for a sort of secret department. Morgan is clearly having fun here, playing the camp to the extreme. The rest of the cast are fine as well, with each of them playing off each other with a nice, smooth chemistry.

Going into Rampage you more or less know what to expect. Check your brain at the door and try and have a good time. The film does run a bit too long, but it entertained me and kept me with it. As always, Johnson does a more than serviceable job in the lead, and George has more than a few scene-stealing moments as well. The effects are convincing and for the most part, the film moves along at a nice pace. I wish Michael Bay knew how to make hisTransformers films this much fun, but what can you do? Well, you can see this movie instead and hopefully enjoy it. I did. Give it a try.

I think it would have been hilarious if Johnson’s character too was CGI and Johnson just provided the voice for it. I think that’s a novel idea! Ok, only kidding. But with Rampage, I think we all can expect that we’ll be getting a CGI extravaganza coupled with a transfer that showcases every pixel of your 4K television. The included 2.40:1 HEVC 4K image is nothing to sneer at, either. Colors are all over the spectrum, shadows are strong and lacking any blocking and detail is simply second to none. This might not have been the best movie out there, but I have to tell you that it looks pretty freaking amazing.

When you’ve got giant-sized gorillas and lizards wrecking havoc on a city, I’m willing to be that it’ll sound pretty effing amazing on your sound system. Add to that Dwayne “The Rock” Johnson – everything he’s in seems to be loud, yes even Baywatch. So with that said, the included Dolby Atmos soundtrack pulls no punches and doesn’t monkey around (sorry, I simply could not resist). Every speaker is engaged, the LFE do the “bump” and directional and atmospheric effects are all over the place. It’s quite the experience, I have to say. More likely than not, you’ll know what you’re in for when you put this disc in your player. So turn it up, check your mind at the door and let your speakers do the work. Yep.

Rampage doesn’t ask a lot of its audience, outside of just having fun and not thinking too hard. That wasn’t a problem for me as I liked the characters and George made me laugh and I cared for his well-being. It’s at least worthy of a rental and possibly even a purchase. 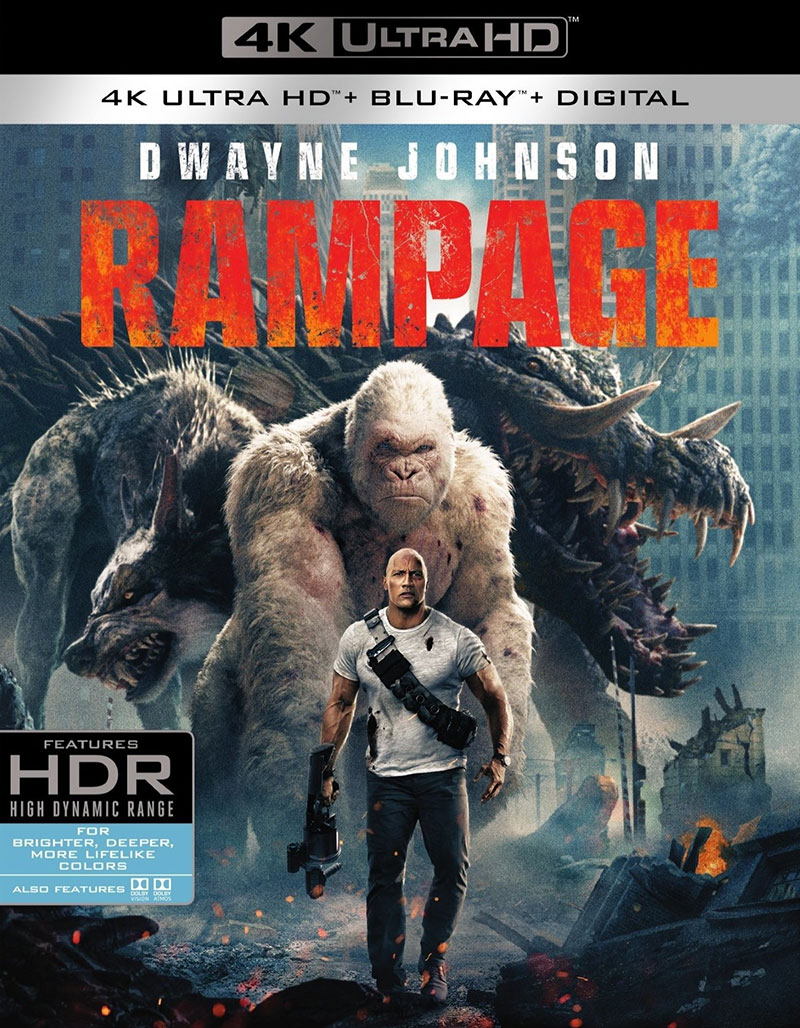