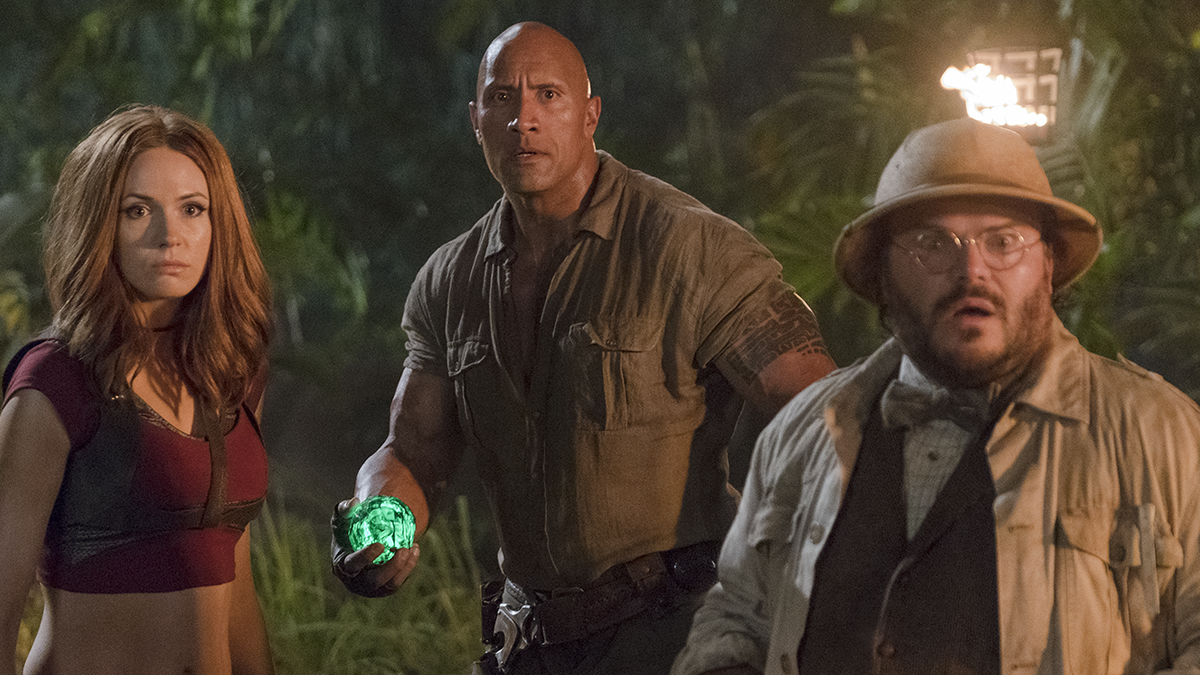 I’ve often expressed (mainly in these reviews) my frustration with Hollywood and their somewhat “lazy” approach to movies these days. For every new and original film out there, it seems that we’re deluged with a reboot or a remake of a film that didn’t come out too long ago. Not all of these are bad, of course, but more often than not I think “did we really need this?” But last time I checked, I’m not the head of a studio, so I either watch and hope for the best or just put it in my “skip” pile when it invariably hits Blu-ray. So when I saw the previews for Jumanji: Welcome to the Jungle, I figured it was a reboot of 1995’s Jumanji. And it wasn’t until that I put the disc in the player that I realized this was, in fact, a sequel to the film. Gone are Robin Williams and Kirsten Dunst, but what we’ve got here might be better. Intrigued? You can’t see it, but I’m doing my Dwayne Johnson eyebrow raise.

In this version, we find four very different kinds of teenagers in detention. Yes, it’s a Breakfast Club redux. They get whisked into a jungle cyberworld where they find themselves inhabiting wildly inapposite avatars. The upshot is that Spencer (Dwayne Johnson) gazes on his own humongous biceps with the same kind of amazement that the rest of us do, while Martha (Karen Gillan) seems to like what she sees (as do we all). Bethany (Jack Black) simpers in horror at his own reflection, while the diminutive Brick (Kevin Hart) — the avatar of a black kid built like a linebacker — screams, “Where’s the rest of me?” They need to work together to survive various lethal obstacles (rhinos, hippos, wildcats, etc) and restore a precious gem to its rightful place atop a mountain. If they don’t, they’ll be stuck in the game forever.

There’s not a lot to the plot, but then again there doesn’t need to be. Not with this cast. Those familiar with the original will be right at home here and, granted, we’ve got a couple of decades of new tech to work with here – the fundamentals remain the same. There’s action, comedy and Nick Jonas. Yep, he’s everywhere. As he has tendency to do, Dwayne Johnson holds the film together with his infallible charisma and if his role seems eerily familiar here, I too was thinking of Journey 2: The Mysterious Island. Everything just works here and it’s a fun way to spend a couple of hours. To top it off, it was both critically and commercially successful and you know what that means…

This was a huge money-maker for Sony in 2017 and, as such, I’m willing to bet that they’d want it to look its best. It does. The 2.39:1 HEVC 4K image leaves nothing to the imagination, though some of the effects do (intentionally) look a bit fake. That’s good. The entire film takes place inside a video game, so if anything I wish they’d have made it even more so. Still, the HDR and increase color depth of the 4K version really do make the images leap off the screen. And, truthfully, there’s something for everyone to look at, be it Dwayne Johnson’s biceps, Karen Gillan’s curves or the never-ending bundle of energy that is Kevin Hart.

Another benefit of the 4K version is that inclusion of the Dolby Atmos track (the Blu-ray has a DTS HD Master Audio that’s no slouch) and when you’ve got characters that are running away from rhinos, I’m guessing that’s something you’ll want to feel. Right? Atmospheric sounds abound and depending on your particular setup, this is one of the most lively action movies I’ve experienced (yes, experienced) in a long time. Vocals, of course, are pure and crisp, directional effects will have your head turning every which way. Suffice it to say that this is a mix that’s sure to please and may even give you a pulled neck muscle or two.

It’d been 22 years since Robin Williams and Kirsten Dunst starred in the original Jumanji. Having recently watched and reviewed it, it’s a bit dated. However, this sequel does get all the little things right. It was a fresh approach to a film that could have continued to gather dust. The cast just…works. And I’m convinced that anything with Dwayne “The Rock” Johnson is worth seeing at least once. Yes, even Baywatch.