Long time readers of this site will know my disdain for Hollywood’s remakes. But in this case I’ll make an exception. I’m serious. When I heard that they were making a feature-length movie about Baywatch my interest was piqued just a bit. When I heard that Alexandria Daddario was being cast in it, my interest went up – a lot. I’m a fan of Daddario (more to the point, I’m a fan of her figure), so the thought of a slow motion shot of her running along the beach in a bikini was a delight to me and countless other fanboys around the world. And they delivered. For those that don’t know, care or are just too ignorant of the origin – Baywatch was the epitome of a 90’s show. It chronicled the “adventures” of a group of lifeguards that somehow managed to save the day each and every week. More to the point, it gave us an excuse to watch the then still amazingly hot Pamela Anderson (who makes a cameo in this film) to run around the beach in a swimsuit. Need I say more?

The challenge of turning a long-running series into a two-hour movie has been done before. And giving it a hard “R” rating has been done as well (21 and 22 Jump Street as well as the recent CHIPS). And those not familiar with the show will be greeted by the main stars nearly before the opening credits rub. Mitch Buchanan (Dwayne “The Rock” Johnson) rules the roost on his beach. He’s a lifeguard with ample charisma and charm as well as the body of a Greek god. His fellow lifeguards include Stephanie (Ilfenesh Hadera), Summer (Alexandria Daddario), Ronnie (Jon Bass) and CJ (Kelly Rohrbach). New to the picture is Matt Brody (Zac Efron), an arrogant two-time Olympic gold medalist who firmly believes that there’s an “I” in team and it’s him. The PR department wants Matt on the lifeguard staff but, as fate would have it, that he and Mitch don’t see eye to eye. However, he proves himself and it’s not before long that we get to the actual plot of the movie: stop a massive drug operation overseen by a local business owner Victoria (Priyanka Chopra).

The television series had a guilty pleasure quality to it that made it fun to watch even if you knew you were losing brain cells while viewing. That has now been replaced by most reality TV shows. Still, to see the chiseled bodies of David Hasslehoff and Pamela Anderson running down the beach was quite the site. The movie offers up equally attractive bodies of both the male and female variety: Dwayne Johnson and Zac Efron aren’t strangers to the gym and Alexandria Daddario and Kelly Rohrbach’s breasts should get equal billing here. The movie is just a bit too tongue in cheek with some gutter humor that’s just not necessary. I wish they’d have gone the more intellectual route, but alas – it was a chance to see some awfully good-looking women in swimsuits. I’m not complaining. All the stars have done better films and this would is chalked up to what “could have been.” All in all it’s not that bad, but eye candy aside – it’ll sit on my shelf for a while.

I posted on Facebook a picture of the cover and said something along the lines of “…this better have slow-motion shots of Alexandria Daddario running down the beach else this is a fail.” Well, thankfully it wasn’t a fail, but I’ve commented on the plot above. That said, Paramount’s 2.40: 1 HEVC transfer is, simply, top notch. And what better place to showcase the beauty of the human anatomy than in 4K (I’m referring to men as well as women). If there was an Academy Award for abs and cleavage, Baywatch would win in a landslide. As it stands, the HDR gives new meaning to the term “sun-kissed”. The detail is amazing, the colors so rich and lifelike and everything in between is just…phenomenal.

Thankfully Paramount saw fit to grace both the Blu-ray and 4K version of this with the same Dolby Atmos soundtrack. That’s a good thing. And, let’s face it, the sound rocks from beginning to end. While the obligatory chase sequences persist, the opening credits are pretty amusing with the logo emerging out of the water. I never knew these could sound so good! Vocals are crisp and clean, surrounds are used often and effectively. The LFE even have a few times to shine. This is the new standard for modern films (Dolby Atmos, not this movie in particular). Embrace and accept it – the future is here.

Baywatch isn’t entirely bad. And neither was the television show (but the less said about Baywatch Nights, the better). I’m generally a fan of anything Dwayne Johnson is in and the eye candy isn’t bad in this movie, either. Plot (or lack thereof) aside, it’s a bit raunchy and I feel in better hands this could have been a blast. As it stands, it looks great but lacks enough substance for multiple viewings. 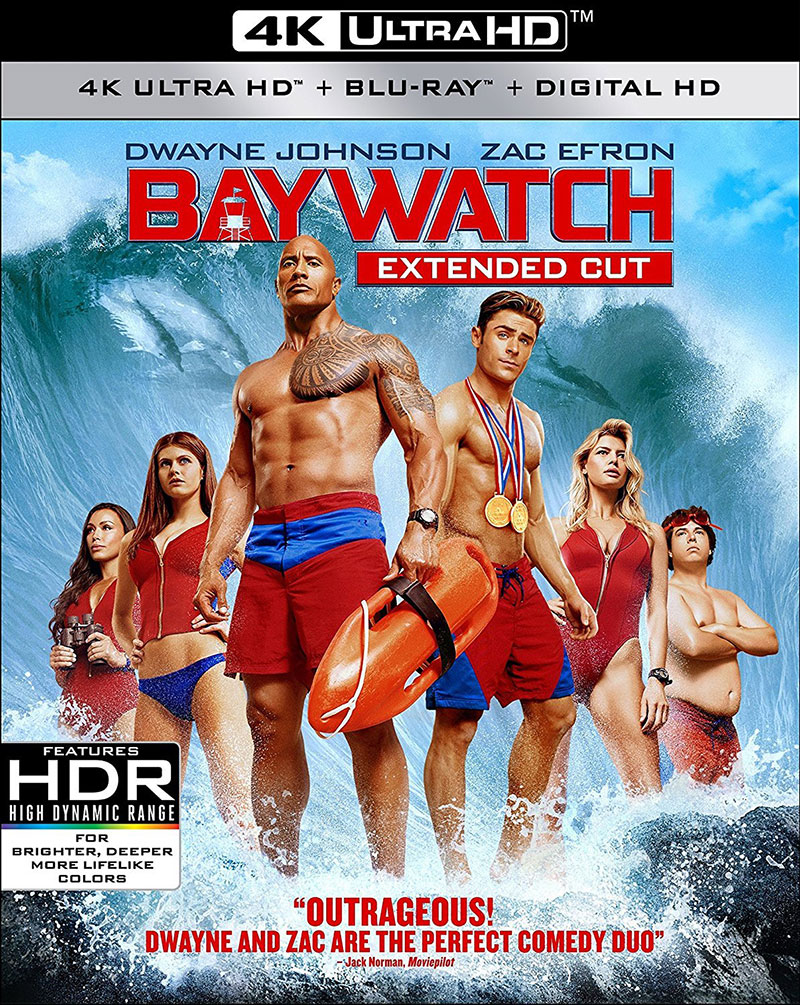