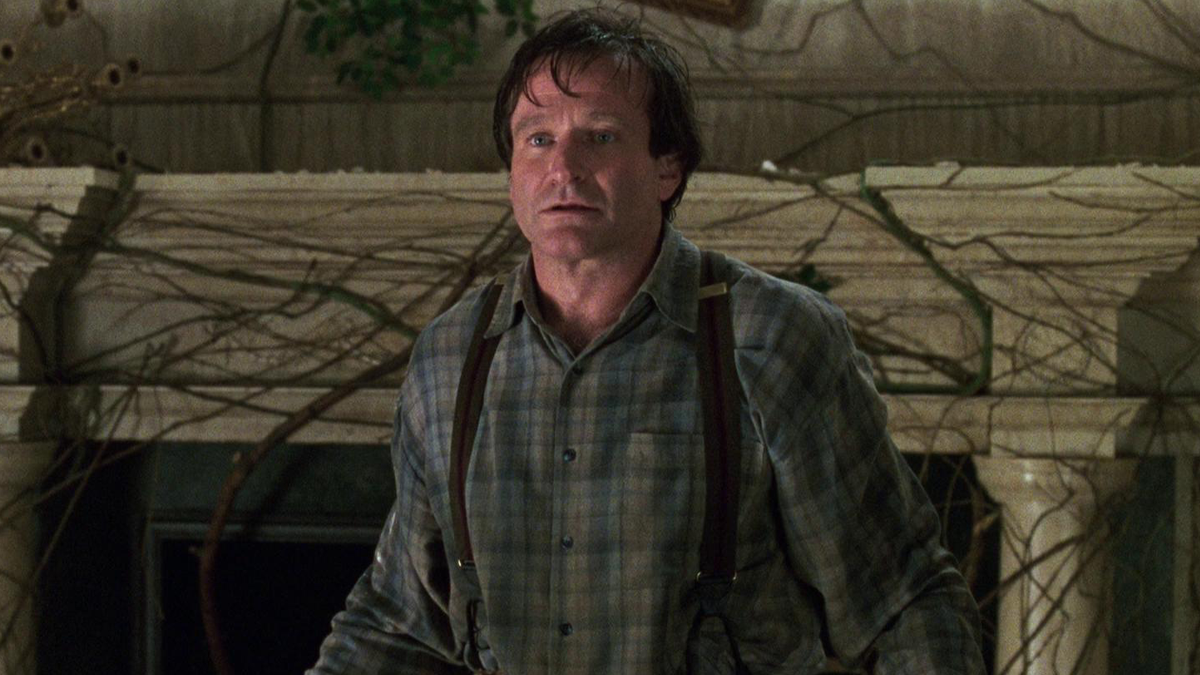 For me, Jumanji was one of those Robin Williams movies that I never really wanted to see in the theater. I mean, come on, it’s about a board game and it was supposed to be for kids. Well, the Special Edition arrived, and I’m a sucker for those, so I decided to check it out. Robin Williams plays Alan Parrish, a boy who has been literally sucked into a board game called “Jumanji”. The experience was so frightening that his friend who was playing at the time, ran away in terror (and later we learn that she had to endure many years of psychotherapy). Terror…Psychotherapy? Do these sound like words that are used in a kids movie? No!

Now we go to the present, two more kids move into what is called “The Old Parrish” house and in the midst of being late for school, start playing the game. What happens, but an 8 is rolled (they would have also accepted a 5). Out pops Robin Williams (a grown up Alan Parrish) and all the madness starts again, this time with more players. Now you would figure that playing a board game is no big deal. Usually mosquitos the size of cats don’t chase you, or a stampede of large African animals don’t stomp through your house, down the street and through the forsest and you really don’t expect the floor to turn to liquid with you standing on it. Welcome to Jumanji! So, how do the kids (one of which is a very young Kirsten Dunst) get Alan to finish the game, find the missing person who watched him get sucked in to begin with to play, and try to avoid getting killed at every turn? You’ll have to watch and find out.

Jumanji was not at all what I expected, it’s a pretty good story, based on an old kids book and had me shaking in my boots more than once. Well, what would you do if you rolled a seven at the craps table (in Vegas) and a killer Lion came at you?! If you’re looking for 104 minutes of good, quality entertainment then you just may have found your movie. Put it this way…you could do a lot worse, like being someone whose actually playing the game!

Jumanji has been on The DVD format, the Blu-ray format (twice) and now makes its debut on Ultra HD/4K. To their credit, Sony did do a pretty good job on this and they did do a restoration that’s brought out the best in the picture. Strong contrast and black levels are evident in several scenes throughout the film, bright and colorful scenes exist as well and all look good. There seems to be a bit of softness in a few of the action sequences and the CGI does seem a bit intrusive. The addition of HDR has given some of the scenes new “life” so to speak and it is a testament that when a studio puts their heads to it, they can create something really impressive.

In addition to an upgraded and restored picture, we get a new Dolby Atmos soundtrack on the UHD. That being said, it’s not a bad-sounding film and, in fact, there are some examples of dynamic range that I’ve used to demo my system to some folks. LFE are present on multiple occasions, making for a front heavy mix. The surrounds are used at just the right time making for some rather interesting surround effects (imagine 3 foot long mosquitos trying to break through your windshield). There are several instances in this film that provides a dizzying and immersive audio mix that’s a welcome change to this disc.

I suppose it’s a bit of a stretch to call Jumanji a “classic”, though it’s hard to believe that it’s been two decades since this came to theaters. This new 4K version adds some new features, but nothing mind-blowing. If you don’t already own this disc, this is the version to pick up.