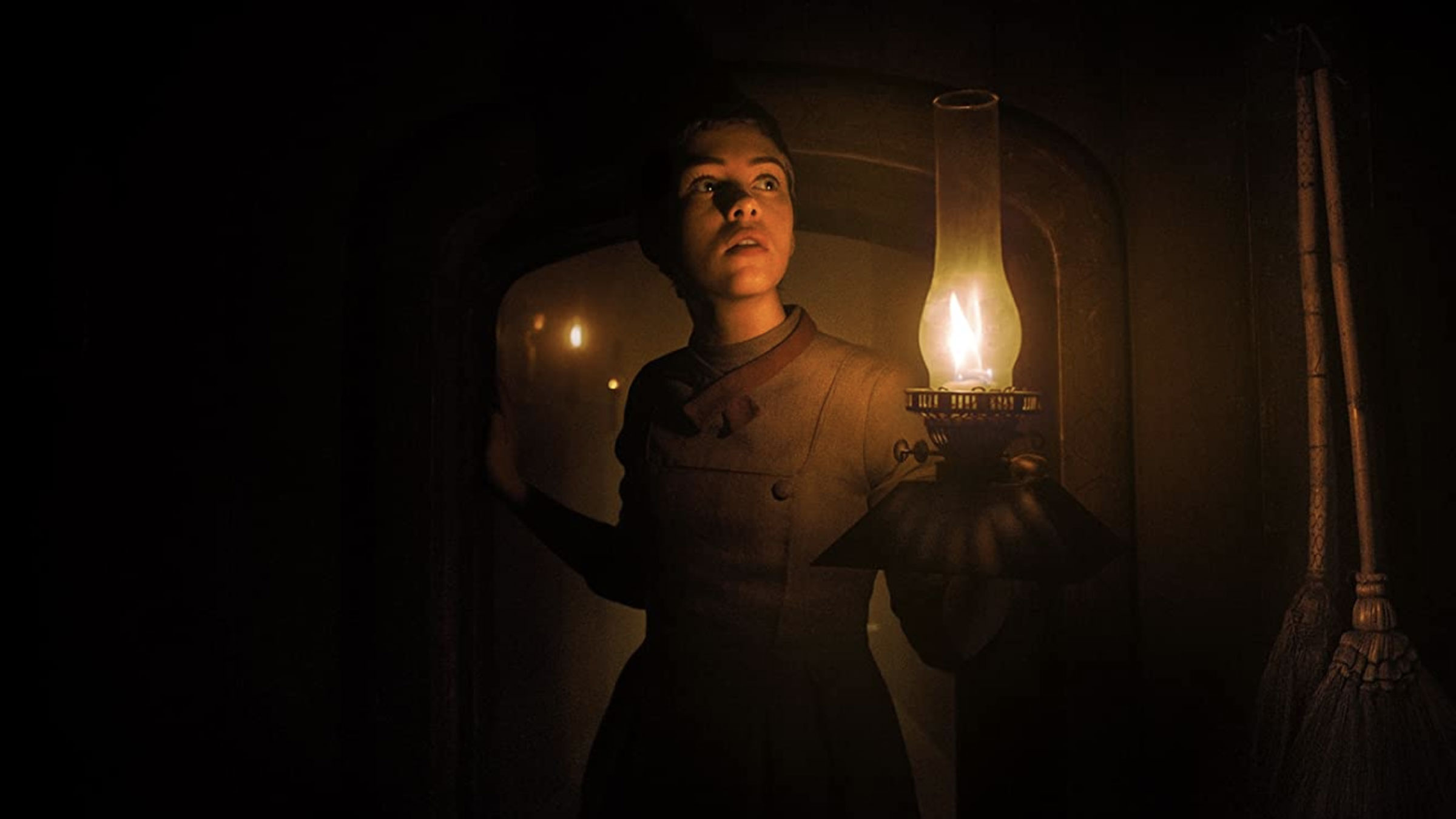 I’ll go on the assumption that anyone reading this review already knows the story of Hansel and Gretel. If not, here’s the view from the top. Two children, Hansel and his sister, Gretel is the story of these two as they wander around in the woods. They come across a house made of gingerbread and the occupant is a witch. She feeds them (in an effort to plump them up and eat them), but the two manage to outwit her and escape. The end. There have been several adaptations on the small and large screen, most recently with Jeremy Renner and Gemma Arterton in 2013’s Hansel and Gretel: Witch Hunters. With Gretel & Hansel, things have changed a bit. These two aren’t hunting witches. It goes back to the roots of the story, but with a few curve balls thrown in (namely, the story is told from the viewpoint of Gretel). And it’s an avant garde film. If you like movies like Mandy, Color Out of Space or The Witch then this is up your alley. If you like your horror spoonfed to you with countless jump scares, you’ll need to look elsewhere.

Gretel (Sophia Lillis) and younger brother Hansel (Samuel Leakey) have been kicked out of their home and are forced to fend for themselves. Eventually the siblings stumble across a house in the woods that’s occupied by a Holda (Alice Krige), a witch. Starving and tired, the children offer to do some chores in exchange for room and food. Holda uses this as an opportunity to try and teach Gretel how to develop her unique gifts. Gretel eventually figures out that Holda has stolen the souls of other children, meaning that she and Hansel need to get out of there, lest they’ll be her next victims.

And that’s it. I turned to my wife about halfway through this and said “this one isn’t much on plot, is it?” And it’s not. But that’s OK. Looking at the source material, it’s difficult to turn a story that most of us know and make a feature-length film out of it. Running only 87 minutes (with credits), it was a challenge. However, the film is more about the journey than the destination. It’s a “slow burn” if you will. There’s tons of imagery and it helps give the film a unique look and feel. Sophia Lillis carries the film, though Alice Krige certainly does a fine job as the witch. Fans of Star Trek might remember her from Star Trek: First Contact. Check that out. While this one won’t be for everyone, I find that a day later I’m still thinking about it. Not many movies have this much of a profound effect on me. Perhaps it will on you as well?

I’ve been reviewing movies on disc for over two decades and this is the first time that I’ve had a disc that has variable aspect ratios of 2.65:1 and 1.55:1. But hey, there’s got to be a first time for everything, right? This is deliberate, of course. Director Osgood Perkins chose to have the opening and closing credits in a wider aspect ratio (why he didn’t stick with a more standard 2.40:1 is beyond me) and the movie itself “closes in” at 1.55:1. Why? Yes, that’s the question. According to Perkins, he wanted this claustrophobic effect to draw the viewer in. He also claimed that it made the movie appear as if they were pages in a book. That’s actually a valid point, come to think of it. Ok, I’m convinced. Putting aside that, the film is beautifully shot. Each scene could be a print on a wall. This is a very surreal film with tons of imagery. The forests’ bare branches serve as a backdrop for some of the movie’s more intense scenes. It’s dark, too. Oh so dark. The image is never compromised with artifacting and thus we’re treated to a very intimate viewing experience. The black of the witch’s fingers is juxtaposed by the porcelain skin of Gretel. Skies have a distant sunset in them. This is a beautiful film.

I guess synthesizers are in again. That’s the gist I got while watching this. Again, much like Mandy or Color Out of Space, this has a very retro vibe to it and I’m fine with that. The included DTS HD Master Audio track isn’t one that’ll blow the roof off the place, but it’s a very steady, paced track that has a few moments. Vocals are sharp and crisp, surrounds are used sparingly, yet effectively. I just can’t get that synthesizer music out of my head! It’s a very slow and deliberate track that effectively serves its purpose.

This is a mixed bag. The more I think about it, the more I enjoyed it. It’s not your typical “horror” movie and yes I used the quotes intentionally. There are no jump scares and I never found my heart racing. But it gets inside you and makes you think. It’s one I’ll revisit. The odd aspect ratios shouldn’t be a problem after a few minutes, though I found the one supplement a little lacking.