When I first saw the trailers for Hansel & Gretel: Witch Hunters, I had to chuckle.  I mean we all think of the classic children’s story with them eating candy from a house made of it, right?  In truth, this scene is actually in the movie, but it’s of little consequence.  One of the great things about movies is that they can take classic tales and put a new twist on them and, viola, you’ve got yourself a movie.  Now the reviews were mixed on this one but I really enjoyed it.  Then again I had the presence of mind to check my IQ at the door, sit back and be entertained.  Others weren’t so fortunate.  The film stars Jeremy Renner, who is everywhere these days thanks to some strong performances in films like The Hurt Locker and The Town.  Of course we need a female lead and an attractive one at that, so we’re also treated to a fully clothed Gemma Arterton who manages to hold her own with Mr. Renner.  Checklist time: classic children’ story that everyone knows and likes? Yep. Handsome male and female leads?  Supernatural forces? Uh huh (witches).  Let’s get this show on the road!

Hansel (Jeremy Renner) and sister Gretel (Gemma Arterton) are walking through the forest.  They happen upon a house made of candy and start to snack away.  All of the sudden they’re lured inside by a witch which they promptly put in an oven.  Flash forward several years and now Hansel and Gretel are bona fide witch hunters for hire.  Evidently business is good and the pickings aren’t exactly slim, but the queen witch of them all, Muriel (Famke Jessen) is out to conquer the world and Hansel and Gretel are in her way.  What doesn’t help matters is that the Blood Moon is only a few days away and Muriel has found out that if she casts a spell, she can make all the witches invincible and the world is hers for the taking.  Of course, Hansel and Gretel can’t let that happen and madness ensues with plenty of smashing, stomping and everything in between.

Part of, ok most of the fun in this movie is the irreverent attitude that both Hansel and Gretel seem to have.  I suppose if one hunts witches for a living, it’d help to have a good attitude about it.  The film never takes itself too seriously and that is the precise reason I enjoyed it.  Tacky one liners are uttered (mainly by Hansel), foul language abounds and some of the scenes are just downright hilarious.  Don’t let this take away from the film itself, though, as the effects are pretty amazing. Famke Jessen puts on a show, though she spends more time looking like what we envision a witch to look like (and less like herself) and there’s a bit of star power from Peter Stomare to boot.  In the vein of Van Helsing, this movie is just pure fun.  Hell, I’d like to see a team up with Van Helsing and Hansel and Gretel – how awesome would that be?  I can’t guarantee this film will be for everyone, but I enjoyed it and can imagine taking it out a couple of times per year just for a good chuckle.

Paramount’s 2.40:1 AVC HD image is nearly flawless in execution and it displays a clarity that’s indicative of a new to Blu-ray film.  Detail is amazing, just looking at the cracks and warts in the witches’ faces is stunning.  The textures in the ogre’s face, the cuts and scrapes in the skin – amazing really.  Granted there’s a lot of CGI in the movie, but it seems to flow pretty seamlessly and never really looks all that fake.  This is a darker movie, so contrast and black levels work well off one another and I never really found any fault with the way this looked.  If you had as good a time as I did enjoying the movie, then this transfer will be a compliment to it as well.

I’m happy to see a Dolby TrueHD soundtrack on some titles if for any other reason than to mix things up.  Hansel & Gretel: Witch Hunters features a very robust mix that encompasses about every sound in the universe.  Vocals are clear and strong, the surround effects are top notch with crossbow arrows whizzing by and whatnot.  The LFE are pretty active as well and while not shaking the room, they do offer a lot of depth and substance to an already very active track.  This is an action movie in every sense of the word and this uncompressed mix is a compliment to it.

Unfortunately we only get three short featurettes: “Reinventing Hansel & Gretel” which takes a look at the origins of the story and how it was adapted for this film. “The Witching Hours” which looks as the story of the film as well as a bit of screen time with the witches. Finally we “Meet Edward the Troll” which is a look at the ogre/troll in the movie.  A DVD and a Digital Copy of the movie is included as well. 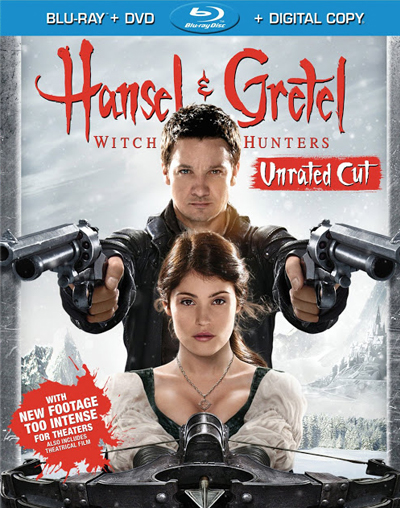