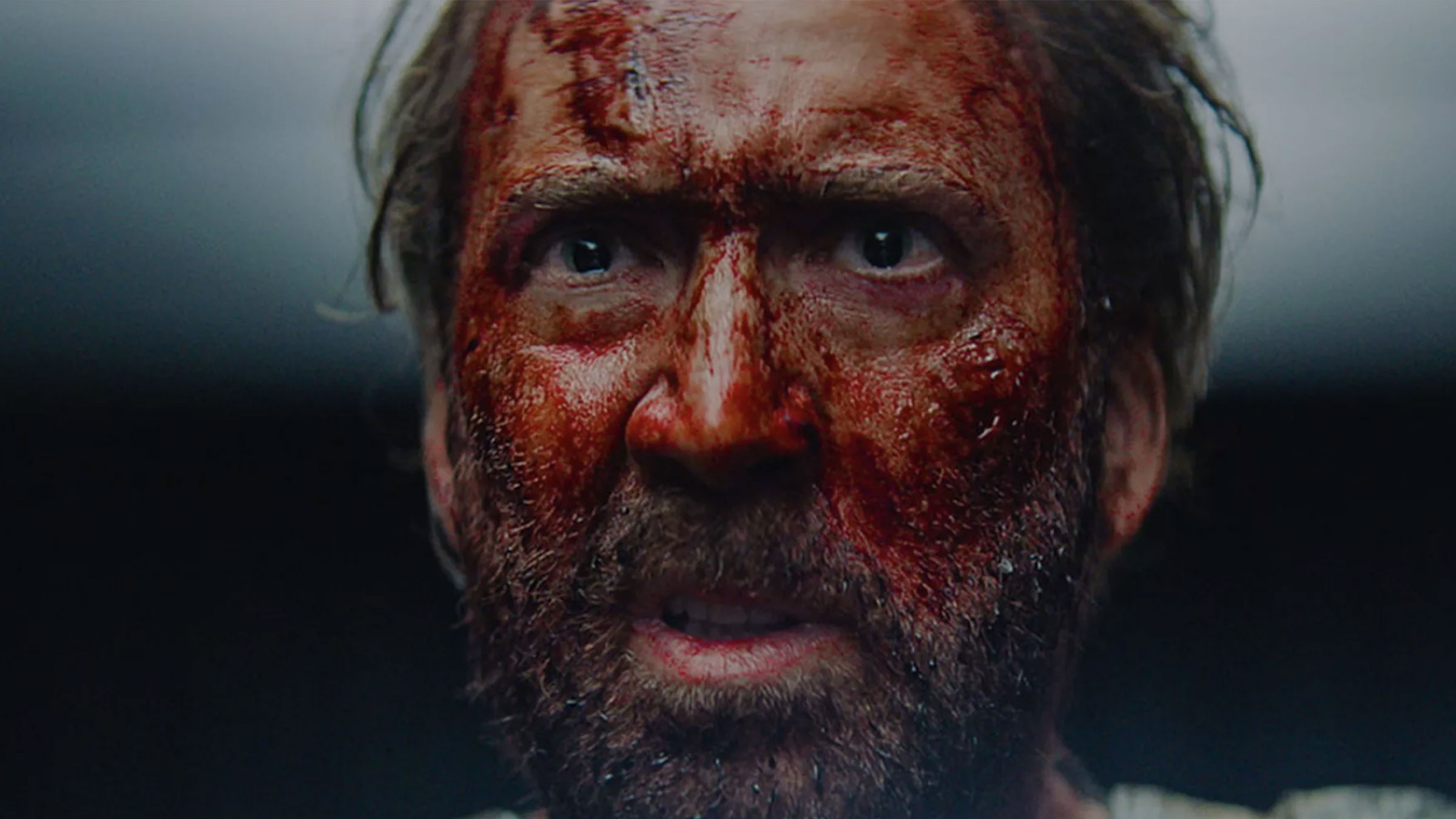 Nicholas Cage (born Nicholas Copploa, i.e. “Hollywood Royalty”) has had a long and varied career that has had its ups and downs. He burst on the scene in the 80’s with films like Valley Girl, Peggy Sue Got Married and Wild at Heart. But his career really took off in the mid 90’s with his Oscar-winning performance as an alcoholic screenwriter in Leaving Las Vegas. From there he was vaulted to “A-List” status in films like The Rock, Con-Air and Face/Off. His success continued in the early 00’s, but as the new decade came around, his star started to fade. Yes, there were diamonds in the rough with his notable performances in Joe and Kick-Ass, but those were few and far between. So it’s with Mandy, a little-known film that’s bound to polarize, that Cage gives one of his best (if not his best) performances. But this is Nicholas Cage like you’ve never seen him before.

At the heart of Mandy is a tale of revenge. We meet Red Miller (Nicholas Cage) and his wife or girlfriend (it never says), Mandy (Andrea Riseborough). He’s a logger in the Pacific Northwest and she a shopkeeper. They leave a spartan existence and seem content and happy with the way things are going. But things don’t last that way for long when a group of fanatical “Charles Manson-esque” hippies roll into town. The leader, Jeremiah Sand (Linus Roache) has eyes for Mandy and she’s summarily kidnapped. What happens to her I won’t say, but seeing as how I started this off by saying it’s a tale of revenge should be a good indication.

The entire film is just odd. It’s like only a few I’ve ever seen before, but the “Fever Dream” premise of the movie seems to work here. It’s strange and hallucinating yet it manages to keep the film moving forward. There’s a scene in which Cage’s character chugs a bottle of vodka, pouring it all over himself and one his wounds and screams at the top of his lungs. There’s only one gun to be found in the film and it’s not fired. But if a film with two men battling with chainsaws is up your alley, you’ll be right at home. That or seeing Cage’s Red forge his own axe in which to exact revenge, well I think the point has been made. Ultimately, there’s a message here and the film isn’t strange just for the sake of being strange. There’s method to this madness. Nicholas Cage turns in a great performance, but it’s the journey that’s the real reward, not the destination.

I can only assume that director Panos Cosmatos is a fan of late 70’s and 80’s films as this is one of the more interesting-looking films I’ve seen in a while. The 2.40:1 AVC HD image isn’t one that will be synonymous with perfection. In fact, in many ways it seems like a step back, but I had to keep telling myself that it was all part of the film and that this was intentional. Those looking for a sharp, crisp and well-defined image need look elsewhere as Mandy seems to be right at home with its scenes draped in magenta and red hues. The interiors appear dark and muddled, the contrast isn’t that strong and has a bit of movement and there even seems to be some ghosting in the later scenes. Again, this is all intentional. The score is a higher than my words make it out to be as there are some scenes that really look good (towards the beginning of the film). But this, like the film itself, is very unique and isn’t afraid to explore the darker side of the color palette.

The included DTS HD Master Audio mix is something right out of the 1980’s. And it’s intentional.  And that’s ok. There’s a mesh of synthesizer and ambiance that create a truly unique atmosphere, but it’s fitting when you consider the film. Vocals are sharp and crisp, though some of the voices tend to get a bit muddled, agian it is intentional. Surrounds are unusually quiet for the majority of the time, but towards the end (when the action heats up, literally) the track kicks in and really amps up the volume. It’s certainly a unique track and one that ultimately satisfies, but nothing that’s too particularly memorable.

There was never any doubt that Cage was and still is a fine actor, but his recent “direct to video” releases have somewhat offset his status as the go-to leading man of the mid to late 90’s. Mandy is undoubtedly one of his finest performances, but this movie is not for everyone. It’s weird. I mean like really weird. You’ve got to stick with it and give it a chance, otherwise Cage’s maniacal performance will be lost on you.