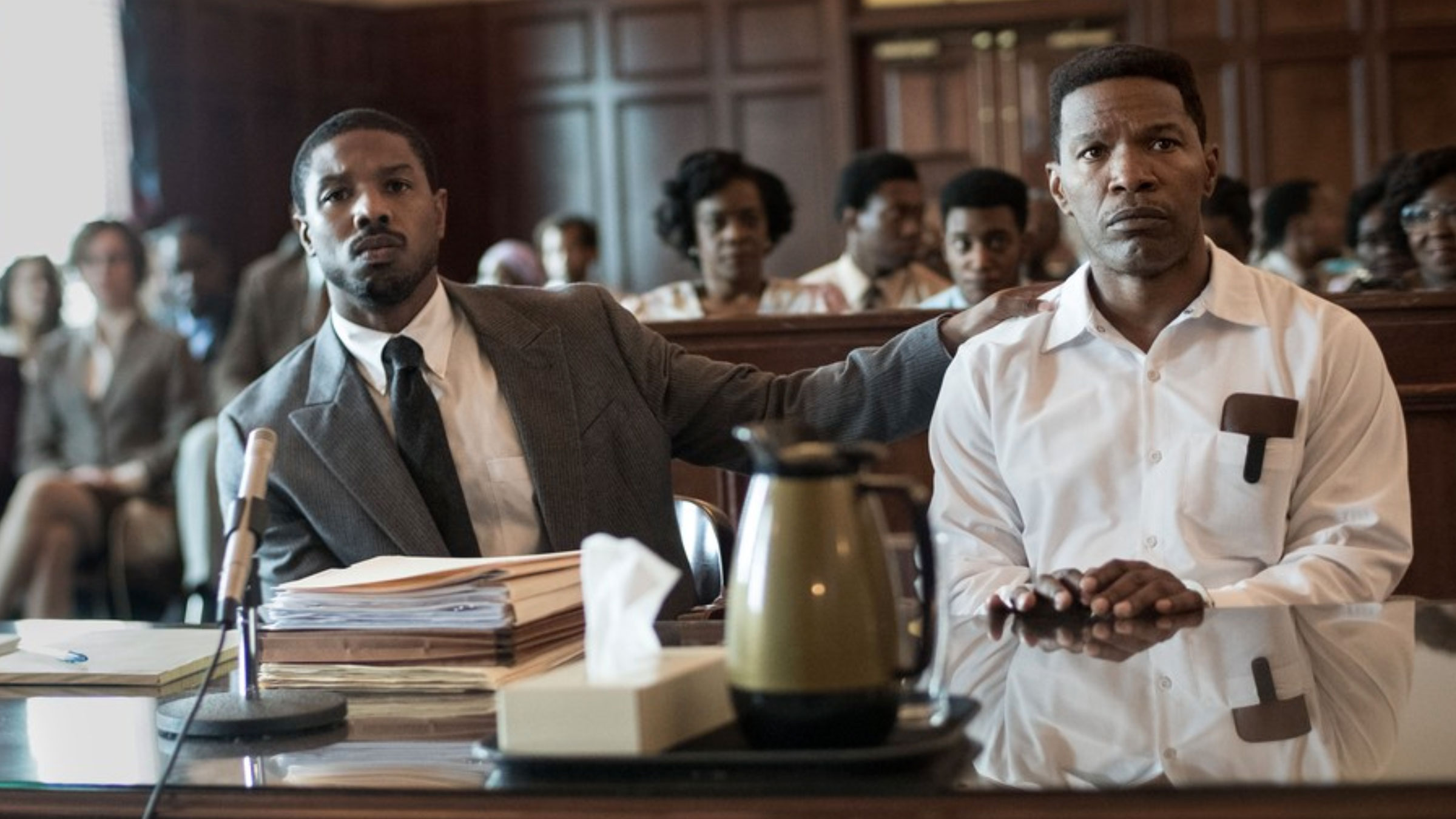 Bryan Stevenson (Michael B. Jordan), an idealistic young lawyer (are there any other kind?) who opens up a small practice in Alabama. Eva (Brie Larson) is his office manager. Stevenson has an interest in death row cases and, in particular, Walter McMillan (Jamie Foxx). Walter is sentenced to death for the murder of an 18-year-old white girl, though there are some glaringly obvious flaws in the case. The sole testimony against him comes from a criminal, Ralph Myers (Tim Blake Nelson) who has plenty of motivation to fabricate.  Bryan’s first hurdle is to convince Walter to accept his case. He’s been burned by lawyers before. But slowly he earns the trust of Stevenson. From there, we know where the case might lead…

In this genre, there’s likely to be something for you. Be it A Few Good Men, To Kill a Mockingbird, 12 Angry Men or even The Judge. Courtroom dramas, in the right hands, can be as good as any other film out there. I had no preconceived notions about what to expect with this one and as I’ve said, the cast is top notch. Michael B. Jordan is a proven, competent actor and this role is one of many that has won him accolades. Larson has a small, but memorable part in her role leaving the remaining billing to one Jamie Foxx. It’s his performance that stuck with me the most. While true crime isn’t something I follow too closely, I had no preconceived notions of what this movie was about. I think it’s better that way. A strong cast, good direction and a good script make this one worth watching.

I remember recently rewatching A Time to Kill, another legal drama set in the deep south. And I can vaguely remember reading a review of that film when it first came out to the extent it said “…and it’s set in the deep south, so everyone is constantly baked in a fine film of Vaseline…”. I have no idea why I remember that and why I felt the need regurgitate it, but that’s not the case here. We don’t have the entire cast that looks like they just got off the beach. Rather, we’ve got a very even keel, somewhat naturally-toned film that looks nice. The 1.85:1 AVC HD image (I like these more and more lately) fills nearly the entire screen and gives fine depth, shadows and detail. In short, it looks good. No, it looks great! As it was supposed to. Viewers will not be disappointed.

Being a legal drama, this isn’t the film that will test the limits of your audio system. Granted, the DTS HD Master Audio soundtrack does have a few moments, but by and large it’s a dialogue-driven film. That said, vocals sound pure and rich. There’s no distortion associated with any of the lead or supporting actors. Some ambient surround effects do trickle in from time to time, but they don’t add a lot – just enough to let you know they’re there. I think the LFE were involved in a few scenes, but they didn’t really make too much of an impact. All in all, it’s a good, but not great effort.

There’s really nothing wrong with Just Mercy. It’s got a competent cast of some of today’s best actors (two of which have an Academy Award to their credit). And Michael B. Jordan proves why he’s one of today’s best-working actors. For fans of the genre, there’s not a lot to complain about and for those that love seeing three top notch actors at the top of their game – you could do a lot worse.