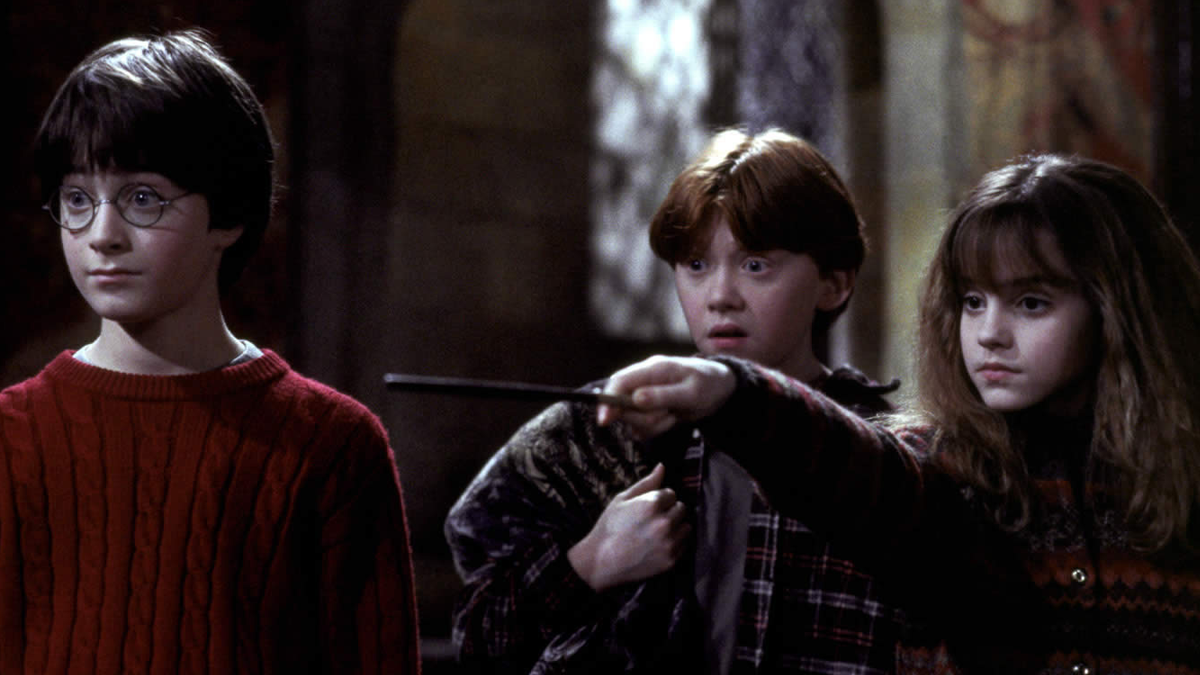 When it comes to some things, I’m a very early adopter and when it comes to others, well I tend to be one of the last ones to catch on. Such is the case with Harry Potter. I’d heard of the boy wizard and the books, but I’ve never fancied myself much of a reader. Movies, as you can all tell, were much more of my forte. But “Harry Potter” wasn’t just another flash in the pan and it’s equal appeal to both children and adults alike is most of what made it an international phenomenon. And, I might add, that phenomenon is far from over. Though the books have now been written, we’re still waiting the final two installments of the film franchise. But we’ve a way to go before those. Yes, this is what started it all: Harry Potter and the Philosopher’s Stone or as it’s called in the USA Harry Potter and the Sorcerer’s Stone. The book, released in 1997, was such an instant success that it wasn’t a question of if it would be made into a movie but when. And, as it turned out, on November 16, 2001 the film was released in the US to both critical and commercial acclaim. Anyone reading this review I assume has either seen the movie and/or read the book(s). If not, well there may be some general spoilers and for that, I apologize. So here we go!

Harry Potter’s (Daniel Radcliffe) parents have just been murdered by Lord Voldemort. Harry’s mother tried to save him from the killing curse, but to no avail. Harry was to be next, but something happened and the spell that was supposed to end his infant life backfired and killed Voldemort instead. This gave Harry the instant moniker “The Boy Who Lived.” Harry lived with his muggle (human) Aunt and Uncle who mistreated him, even to the extent where his room was under the stairs. But, on his eleventh birthday, Harry finds out that he’s been invited to Hogwarts School of Witchcraft and Wizadry to learn to become a wizard. After a little back and forth between Hagrid (Robbie Coltrane) Harry finally boards the magical train and the adventure begins. Once at school, Harry immediately befriends Ron (Rupert Grint) and Hermione (Emma Watson) as the three are put in the same house of the school; Gryffindor (the others being Slytherin, Hufflepuff and Ravenclaw – each with it’s own defining characteristic). As Harry and the other first years try to adjust to life at the school, there seems to be some strange goings on. A mysterious stone believed to have magical powers is the quest and the children, being nosy as they are, stumble upon it. Could it be that Lord Voldemort isn’t dead after all and now he’s back to finish the job he started?

Ok, let’s face it, the first few Harry Potter books were more for the children than the adults. The first and subsequent movie was mainly setting the stage for what was to come. It introduces us to the main characters in the books and films: Draco Malfoy, Severus Snape, Headmaster Dumbledore and Hagrid. We get to see the school as a whole, meet some of Harry’s friends who will be with him through the series and really get a feel for what’s going on in the world of Harry Potter. This first movie and the second for that matter, are pretty much literal adaptions of the books. I think I once read “they didn’t even skip a semicolon” so if you’ve read the book then you’ll have seen the movie, in essence. Still, seeing the visual effects and images on screen gives the books new life and to date the first Harry Potter movie is the highest-grossing in the series. I’m sure that will change with the last film, set to debut in July 2011. Still, if you’ve even picked up a Harry Potter book and enjoyed it then this is where you need to start.

Warner wasted no time hopping on the 4K bandwagon and has brought all 8 of the Harry Potter films to the fledgling format. The latter half of the series has already been released and we’ve covered those here, here, here and here. The 2.40:1 HEVC 4K image is a 2K upcovert to 4K, so the image won’t look quite as pristine as some other “true” 4K titles out there. The obvious caveats are there with increased clarity and resolution, detail has been improved and contrast seems to be a bit more noticeable. What really caught my eye, both of them actually, was the HDR. The use of color and depth really seemed to breathe new life into this image. Colors seem to leap off the screen, the reds of the great hall, the little nuances here and there. I don’t say this on many titles, but this is an instance in which the 4K really does show its true colors (so to speak).

Harry Potter and the Sorcerer’s Stone’s DTS X soundtrack offers a nominal upgrade to the previously-released DTS HD Master Audio (found on disc two). Yes, dialogue is at the forefront of the film but in a world of witches and wizards, you can rest assured that there’s going to be something in your rear surrounds. The score sounds amazing and get used to it because that same chime will become ever so familiar in the subsequent films. While not a “rock the room” sort of soundtrack, there is a lot going on. It’s active and robust and perfect for this film.

Warner has released these movies in various formats and with different offerings over the years. The most definitive version of which are the Ultimate Collector’s Editions on Blu-ray which will never leave my collection. However, these Ultra HD/4K offerings aren’t really that bad. This is a three disc set with the movie being on one disc as well as the Blu-ray on another (with its included supplements) as well as the stand-alone Blu-ray disc full of supplements. Yes, you lose all of the swag from the UCE version (the bigger box, collectible cards and various other things), but if it’s better quality audio and video that you’re looking for, plus the supplements – this is a hard version to beat.

It’s a mixed bag if you want to upgrade to the Ultra HD/4K versions of this franchise. Certainly you’re missing out on the extended versions of the films and the included swag with the books, packaging and collectible cards found in the Ultimate Collector’s Editions. But if you don’t care about that sort of thing, this offers a visible upgrade in both audio and video while offering up the supplements found on the UCE versions. And it’s inconsequential, but I prefer the cover art of these 4K versions to those of the UCE versions.