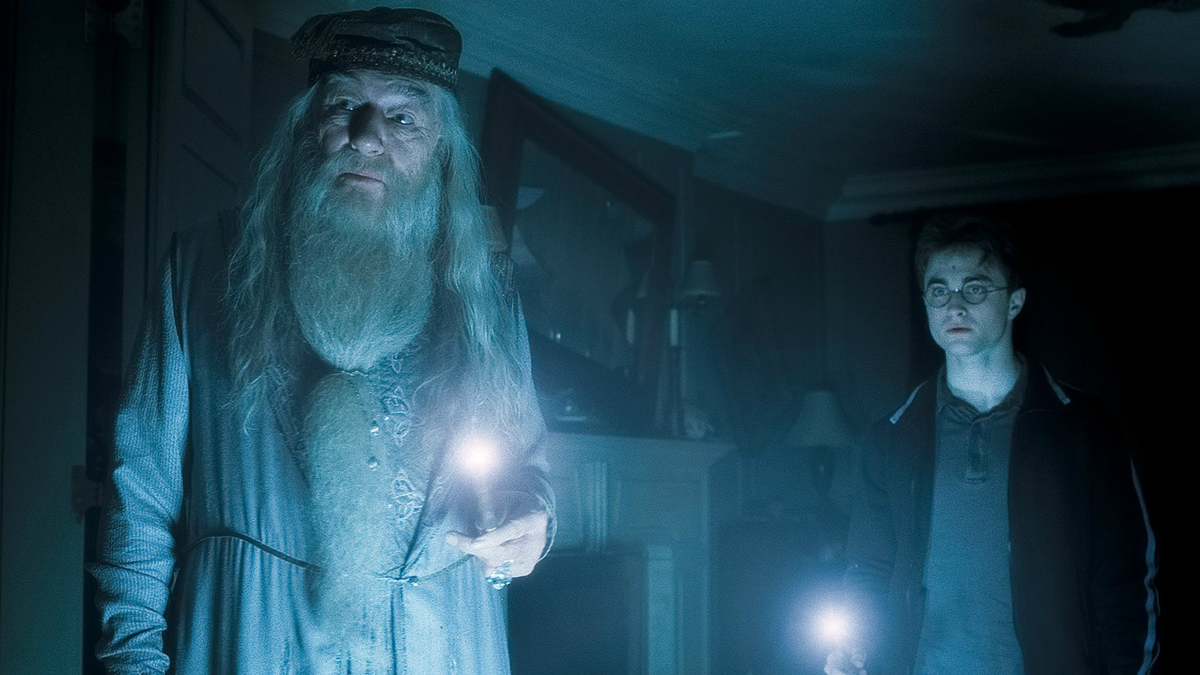 Nearly every year in the 00’s has seen a Harry Potter movie. The only exception being 2003, 2006 and 2008 (ironically enough the year this movie was supposed to come out, more on that later) but the rest have been chock full of witches and wizards. Having read the entire Harry Potter book series twice now, I can say that I fully understand the novels and subsequent films and I also fully understand why they’re the phenomenon that they are. They’re good. They’re imaginative and well-written. Harry Potter and the Half-Blood Prince is actually the first book of the series that I received and I think Warner sent it when the DVD of “Harry Potter and the Goblet of Fire” was released. At the time, I’d never read any of the books so it sat on my bookshelf. How little I knew that within the confines of those pages we’d lose a major character and it was leading up to the final chapter in the Harry Potter saga. Harry Potter and the Half-Blood Prince was actually supposed to come out in Nov. 2008, but Warner bumped the film to July 2009 because, well, they’d already had a great Summer with The Dark Knight and why put all your eggs in one basket. Though in a more PC move, they said it was for the fans’ benefit so there would be less of a wait until the final chapter arrived and so they could fine tune the movie with effects and so forth.

Love. It’s all about love! The students at Hogwarts are at the age when the sexes notice one another and no where is this better illustrated than in this film. But I digress…Voldemort’s Death Eaters are gaining power and have even attacked the city of London, bringing down the Millennium Bridge. Harry (Daniel Radcliffe) and loyal cohorts Ron (Rupert Grint) and Hermione (Emma Watson) are all headed back to Hogwarts where they’ll be safe from the Death Eaters. Both Harry and Ron are in a potions class taught by new instructor Professor Slughorn (Jim Broadbent), who’s been brought to Hogwarts for a little more than his talents as a teacher. Harry discovers his textbook has some rather cryptic messages in it, although they seem to help him with potions. Moreover, what the focus of the movie is really about is that we get to learn a bit more about Voldemort’s past. Though Ralph Fiennes, the actor who plays the adult Voldemort, doesn’t appear in the movie his real-life nephew Hero Fiennes plays the younger version. It’s through a series of flashbacks that we learn how Voldemort was recruited at Hogwarts, how he was different and even at a young age, showed signs of being a great (and evil) wizard. Now don’t forget the love! A few of the main characters share a few snogs and a major character says goodbye.

Harry Potter and the Half-Blood Prince felt more like a tease to me. Don’t get me wrong, I loved both the book and movie and there are certainly some important elements that will play a part in the final two movies. But I think as a fan of the books, I want so much to get to the final two movies that this one might be overlooked. The focus of the book was more on Harry and his obsessive quest to find out who the Half-Blood Prince really is and that was somewhat overlooked in the film. Also, I didn’t note the role of Draco Malfoy (Tom Felton) who’s been tasked by Voldemort himself. Felton has developed into quite an actor and this is him at his best as his conflicted bully character is now the one being bullied. Let’s face it, the entire cast is back and if you’ve watched the previous five movies you’re really not going to stop now. And as any fan of the books knows, it only gets better, much better, from here on out. So while there are elements in Harry Potter and the Half-Blood Prince that will play a part in the following two movies, it’s more of a reprieve from the previous film. I recommend it with all my heart, but rabid Potter fans will snatch this one up regardless of what I say.

Like the other Potter films that have come to 4K, this has been given a new 2K transfer for this Ultra HD offering. The result was, to me, immediately noticeable. I’m sure I’ll sound like a broken record, but there isn’t a night and day difference between the Blu-ray and the Ultra HD. But pop in the DVD (not included with this set) and you’ll think your television went out of focus. This 2.40:1 HEVC transfer and it looks as good as I thought it would. As any fan of the books and movies knows, the story line gets more and more dark as they progress. Of course this is reflected in the transfer as the movie is quite dark. Darkness in films often heightens the mood, but can spell disaster as to how the movie looks on screen. In this case, however, it’s amazing. I saw no hinting of any artifacts, contrast was perfect (albeit it tweaked a bit) and black levels were right on the money. All that said, the HDR really does a great job here offering richer, deeper blacks and more realistic color.

Again, like the other films, we get a new DTS X mix that trumps the previously-released DTS HD Master Audio mix (also included). That said, this film has some great examples of dynamic audio, notably in the first scene when Harry and Dumbledore do a side-by-side apparation (teleport). I remember seeing or hearing this in the theater and thinking how good this will sound on my home theater and I wasn’t disappointed. Another great example is when Dumbledore “cleans” up the room in which he finds Slughorn. Everything works its way back into place, all the while using every channel to generate some sort of sound. A top notch effort on the audio front will have fans tingling with excitement.

This three disc set is chock full of extras, though the bad news is that there’s nothing new to crow about. Warner did such a good job with their Ultimate Collector’s Editions that I’d be surprised if any new material actually exists. Having said that, if you didn’t want to pony up the cash for one of those editions, you get the supplements as part of this three disc set.

Disc One – Ultra HD/4K (no supplements)

Harry Potter and the Half-Blood Prince is, quite literally, the calm before the storm in the sequence of events. Yes, things did happen like the death of a major character, but this was essentially a lead up to the final two part finale. But it’s an integral part of the world of Harry Potter and this disc is on par with the others in terms of audio, video and supplements. And, let’s face it, no collection is complete without this one.