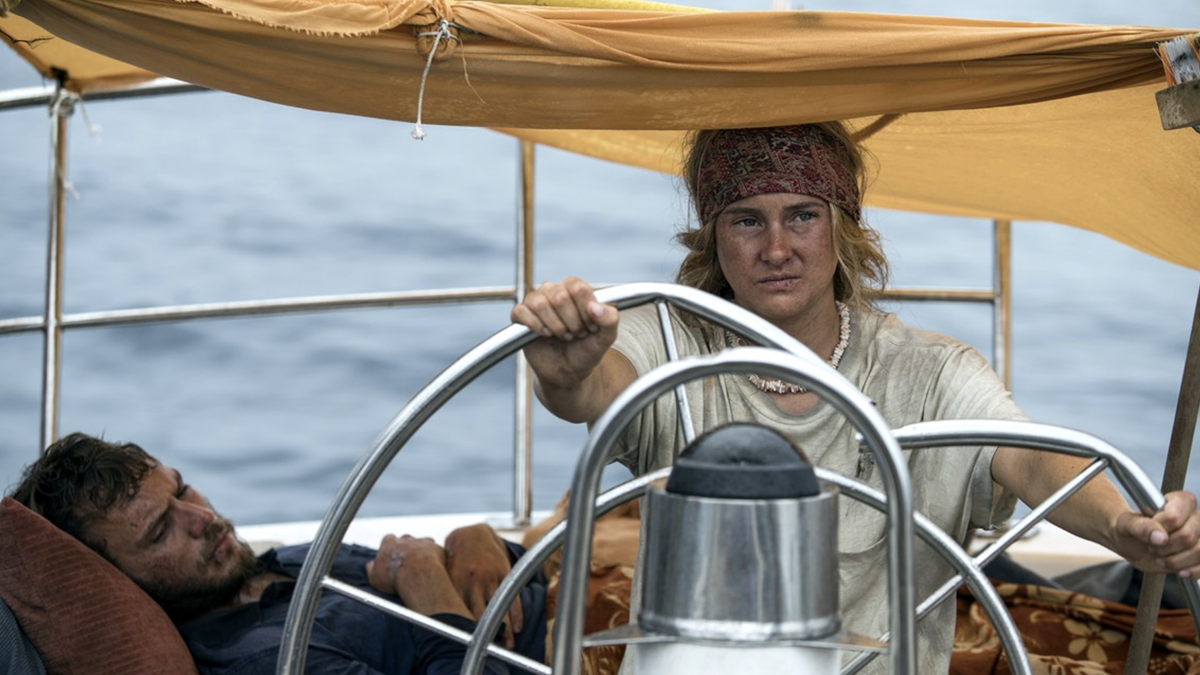 With a drink in hand, I looked out over the teal blue waters of the Mediterranean. I was on a Greek Isles cruise and all of the sudden it hit me – there’s a lot of water out there! Even on board a cruise ship that held 5,000 people it pales in comparison to the majesty of the sea. I had to wonder how many lives have been lost at the hands of the ocean. It makes one feel pretty insignificant. Having been on my share of sailboats, I can say that it’s not the life for me. Everything is close, cramped and usually wet. I have a deep respect for those that can or choose to do this for a living. But there are those that most likely find life on land boring, so to each their own. However, the premise of Adrift, the real-life story of Tami Oldham and Richard Sharp offers a new perspective on what happens when man goes against nature.

Set in 1983, we meet Tami Oldham (Shailene Woodley) who’s a bit of a drifter. She left home after high school and has traveled the world and now finds herself in Tahiti. As fate would have it she meets Richard Sharp (Sam Claflin), a bit of a “been there, done that” sailor who’s literally built his own boat. The two become involved and two wealthy friends of Richard’s propose that they sail their yacht back to California and being paid handsomely for it. Tami and Richard ponder the offer figuring that it’s not only a good place to be alone together, but to earn some good money in the process. Things are going fine until they run into Hurricane Raymond, one of the worst hurricanes in recent history. The story tells their tale of survival as they’re now without a mast and floating thousands of miles away from civilization.

Speaking as someone who’s sailed before (and not really liked it), I can’t imagine being on a boat and sailing 4,000 miles to anywhere. Then again, had we as a species not done this, we’d likely be landlocked in Europe. The film’s non-linear narrative is a rather unique approach to telling the story. We get scenes before the storm, during and after. These help chronicle the relationship between Tami and Richard as well as show us the dire circumstances that they’re in. If you need a point of reference, movie-wise, think of 500 Days of Summer and that’ll give you a good indication as to how this movie is told. And if movies like this are up your alley, then why not give Cast Away, White Squall, The Perfect Storm, All is Lost or In the Heart of the Sea a look?

Adrift sails onto Blu-ray with, at times, one of the most gorgeous-looking series of images I’ve seen in a long time. I’m not talking about the actual picture quality, but the way this movie is photographed really sets it apart from some of the other “at sea” movies. The very wide 2.39:1 AVC HD encode really takes advantage of the screen real estate. Additionally, Kormákur along with Director of Photography Robert Richardson stage some breathtaking shots, especially during the hurricane sequence. The camera is in the water next to the actor and it really brings the viewer into the movie. On a more technical level, I found the picture’s quality pristine, black levels solid as well as detail that showcases the effects of what dehydration are really like. Some of the scenes might not be that great to watch, but they look good – and that’s the point.

A very robust DTS HD Master Audio soundtrack is included here and it goes without saying that the results are quite amazing. Just as football movies pack a punch with their “thuds” so too does Adrift. The hurricane sequence (several scenes are included) really sets the stage for a dynamic and “moving” sound mix. It puts you right in the middle of the action, which of course, heightens the viewing experience.  Vocals are crisp and clean, LFE are highly engaged during a few of the key scenes and the front stage handles the remainder with no issues at all.

Adrift, like many other films based on disastrous real-life events, shows man’s ability to survive. The sheer will to live. It’s amazing. Admittedly, I’d never heard of this story, but prior knowledge is actually a good thing in this particular case. Director Baltasar Kormákur certainly has a gift when showcasing man vs. nature and it’s on full display here. Universal’s Blu-ray looks and sounds amazing and the disc contains just enough supplemental features to warrant a purchase.