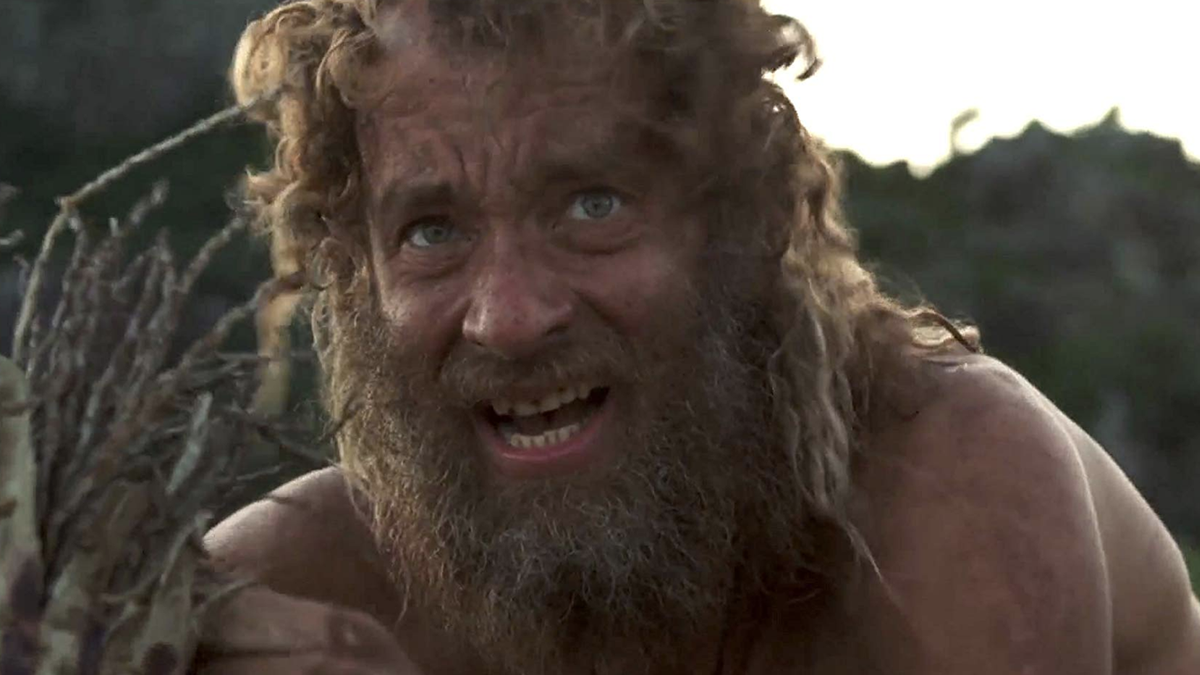 Chuck Noland (Tom Hanks) lives his life by the clock, as he works all the time and has precious little time left over. Noland is a FedEx manager with a strict system, the work has to be done on time or else head rolls and people are fired. He has a loving girlfriend Kelly (Helen Hunt), but because his work takes him all over the world, he is unable to spend much time with her. He does love her and want to be with her, but his work is demanding and he doesn’t want to let down his customers. As he prepares to leave for his next assignment, she gives him a special gift in the form of a pocketwatch, with a small photo of her inside. As he flies toward that assignment however, his plane crashes into the ocean and Chuck’s life is forever changed in the process. He washes onto an island and begins to prepare a rescue sign, but quickly realizes how slim his chances for survival are. So he does what he can to remain alive and in decent spirits, which includes using some FedEx boxes that washed ashore. As time passes, he must become more and more reliant on himself and the island, but can he ever return home and resume his relationship with Kelly, his true love?

I saw Cast Away in theaters and liked the film, but I have to say, I wasn’t as blown away as I expected. I wasn’t too impressed by the start or finish of Cast Away, but the middle was magical and was enough to make this a must own release. The film as a whole is a very good, but it is the time on the island that makes it shine, especially Tom Hanks stellar performance. I am not surprised he took home a Golden Globe for his efforts and while Ed Harris should have won the Oscar for Pollock, Hanks gave the second finest male performance of 2000. Whether celebrating over his fire starting skills or just chatting with Wilson, Hanks is excellent in Cast Away and deserves much praise. As I mentioned, the island sequences are the film’s best moments and while the other elements were needed, they were a let down to me. I felt like the end was stretched out too much and while not as predictable as expected, I still longed to be taken back to the middle of the picture. This Blu-ray disc doesn’t have all the extras, but the video & audio are much, much improved. So if you’re an extras fan, stick with the standard release, but if you’re a movie fan, then this Blu-ray version is the obvious choice.

This film is reliant upon one man, Tom Hanks and since he is alone for most of the film, I think his performance deserves a special mention. I’ve always liked the work of Hanks and as he has advanced through his career, he seems to only improve and turn in even more memorable performances. He seems so natural within his roles and here is no exception, his character is enacted to perfection, which is an amazing feat to behold. It is a rare cinematic treat to see such depth in a performance, as Hanks evolves his character and seems to uncover unknown traits, as he gets to know himself on the island. This is one of the most powerful turns of 2000 and perhaps Hanks finest effort, although he has so many, it would hard to choose. You can also see Hanks in such films as Saving Private Ryan, Bachelor Party, Forrest Gump, Philadelphia, Sleepless In Seattle, Apollo 13, The ‘burbs, and Joe Versus the Volcano. The cast here also includes Helen Hunt (What Women Want, Twister), Christopher Noth (The Confession, A Texas Funeral), Nick Searcy (Tigerland, The Fugitive), and of course, the immortal Wilson.

Cast Away is presented in 1.85:1 anamorphic widescreen. The transfer on the standard release is superb, even now years after its original release. As good as it look however, it can’t hold a candle to this new high definition presentation, which offers simply a gorgeous experience. The movie is now seven years old, but this is easily one of the best Blu-ray transfers I’ve seen and I’ve watched almost all of the format’s releases. The island visuals shine, with rich colors and crystal clear details, you’ll feel like you’re deserted yourself. The scenes not on the island do lose a little of the luster, but they still look excellent and look as intended. So in the end, this is a spectacular treatment in all respects.

As impressive as Cast Away looks, believe it or not, it sounds even better. I still remember how powerful the audio was when I saw the film in theaters and now, I can experience that at home. The attention to detail is beyond stunning, especially in the island scenes, which sound so alive, you’ll think you’re on the beach yourself. The smallest touches, from waves lapping in to rustling leaves add so much to this mix. This lossless DTS HD 5.1 option also delivers in terms of sheer power, such as in the plane crash scene, which is awesome and then some. Just as well handled is the music, which can be reserved or take center stage, depending on the scene’s intentions. This disc also includes Spanish and French language tracks, as well as subtitles in English and Spanish.

In terms of new extras, the lone one is a trivia track. As far as old ones, sadly Fox didn’t port over most of the extras, so all we have is an audio commentary track and the film’s theatrical trailer. The track features director Robert Zemeckis, visual effects team members Ken Ralston and Carey Villegas, sound designer Randy Thom, and director of photography Don Burgess, all of whom have some interesting comments. I was most taken with Zemeckis and his segments, but all offered some nice information and in the end, this track is well worth a spin indeed.