A decade has passed since we last saw Tallahassee, Wichita, Little Rock and Columbus. And in 2009 zombie films weren’t exactly unheard of, but the good ones were few and far between. Zombieland was one of the good ones. No doubt it was due to the eclectic cast, all of whom have continued their successful careers. Emma Stone now has the Best Actress moniker attached to her resume, Eisenberg made a name for himself in films like The Social Network, Now You See Me and Batman vs. Superman: Dawn of Justice. And Woody Harrelson is, well, still Woody – a talented actor who will continue to get meaty roles thrown his way. But sequels have to be bigger, badder and more enjoyable and thus the cast in this one has grown.  It’s time to nut up or shut up. Let’s get started.

Ten years have passed since the original and though it’s never outright said, we assume the same amount of time has passed in zombieland. Tallahassee (Woody Harrelson), Columbus (Jesse Eisenberg), Wichita (Emma Stone) and Little Rock (Abigail Breslin) are now living in the White House essentially avoiding zombies. But things aren’t all unicorns and rainbows. Columbus and Wichita are having relationship issues and Little Rock years to be around others her age. There’s also Tallahassee trying to be a bit too overprotective of her. Little Rock runs off with a hippie musician, Berkeley (Avan Jogia) and the others hit the road in search of her.

There’s more, of course, but that’s it in a nutshell. And part of what made the original so fun was the interaction between the four leads. That’s present here as well, but something felt that it was missing. The addition of a few new characters, particularly the doppelgangers, Albuquerque and Flagstaff (Luke Wilson and Thomas Middleditch respectively) and the bubble-headed Madison (Zoey Deutch) add some much-needed comic relief to several scenes. It’s difficult to make lightning strike twice, but Zombieland: Double Tap is nearly as good as its predecessor. And yes, if you stick around long enough, you’ll be graced with Bill. Murray’s presence (in perhaps the greatest end credit sequence ever).

Sony produces some of the best-looking DVD’s, Blu-ray’s and 4K titles around and this is no exception. The genre might dictate a darker tone, but don’t kid yourself – this is one fine-looking image. The 2.39:1 AVC HD encode positively shines. Detail is exceptional and what really caught me was how much the backgrounds were in focus. It was easy to make out finite details. Contrast is generally strong, black levels were solid and the film exudes a film-like sheen that really gives is a unique look. That and the “rules”, when they show up, have a very 3D like look to them. All in all, no complaints here; as expected.

The DTS HD Master Audio track breathes new life into a few scenes. Vocals are pure and sharp, surrounds abound during selected scenes and the low frequency effects offer some support a few times. Even though this is a “zombie” movie, per se, there isn’t a lot of killing going on. The movie has much more dialogue than the first, but still manages to convey a very dynamic track that’s sure to engage the viewer. No complaints here.

Zombieland: Double Tap falls just short of what I loved about the first one. The sense of discovery is gone, but it’s an entertaining film nonetheless. The same characters and interactions are there and I loved the (albeit brief) scene with the doppelgangers. Sony’s disc, per usual, serves up reference-quality video and audio and the extras are robust enough to warrant a purchase. 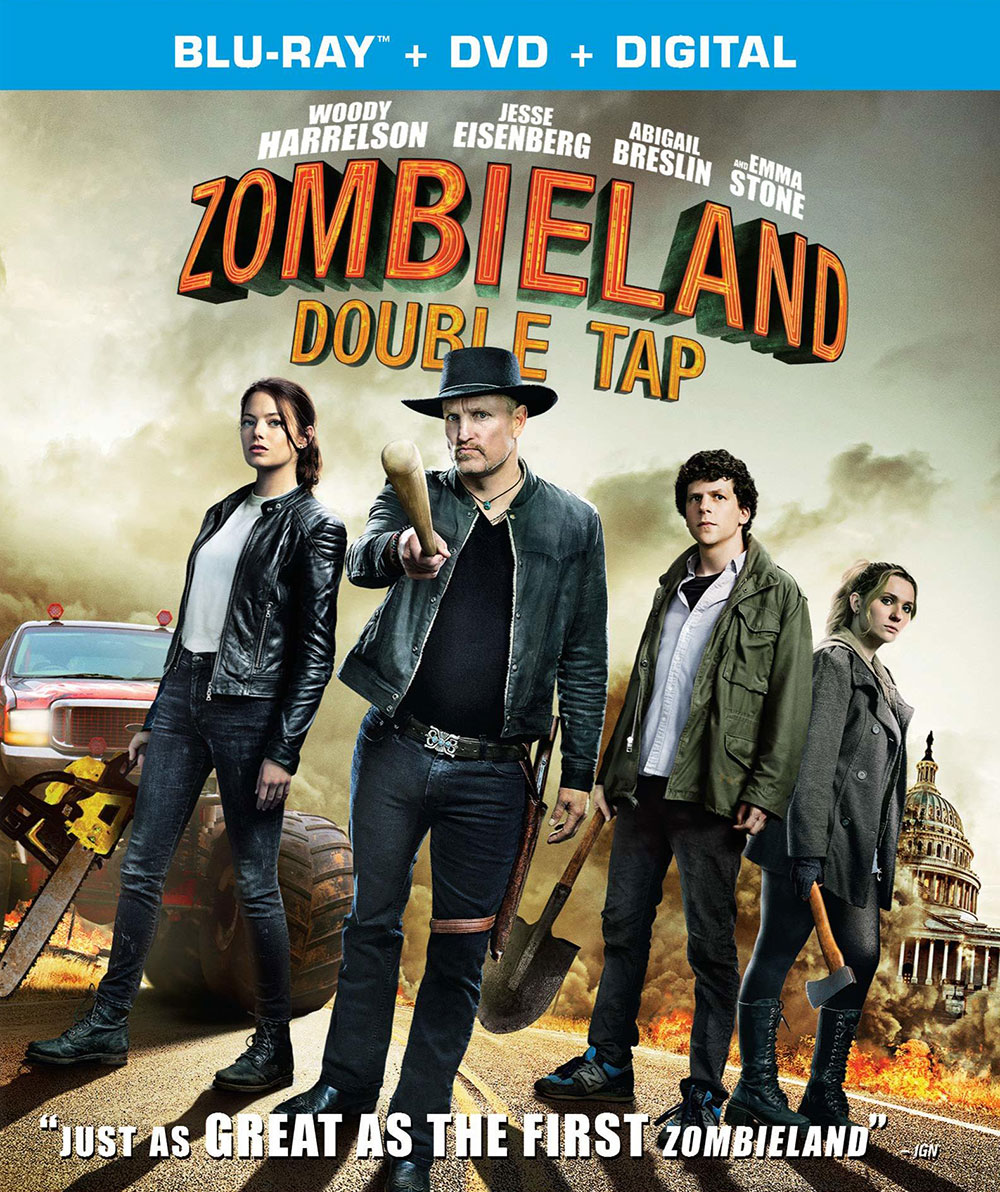