Over the last decade, zombie and vampire movies have become the new “it” thing in terms of films. While I’m getting a bit tired of vampires (thank you Stephenie Meyer), I find it nearly impossible to become tired of zombies. Anyone reading this review will have undoubtedly seen the Shaun of the Dead and if you haven’t, please do so. Another favorite of mine, the remake of Dawn of the Dead, albeit set inside a shopping mall. I don’t know what it is about the undead that brings me to life, but I simply can’t get enough of those blood-suckers. With Zombieland, originally written for television, we see a new yet not so old take on things.

We meet our hero “Columbus” (Jesse Eisenberg) as he’s on his way from Austin, Texas to Columbus, Ohio to see if his parents are alive. The entire world has been overtaken by zombies ever since someone ate a tainted hamburger. The main characters are referred to as where they’re headed as names make things too personal. Columbus has managed to survive due to a strict set of rules that he adheres by. For instance, rule #1 is “Cardio” in that the fat people were the first ones to become zombies simply because they weren’t in good enough shape to out run them. Rule #2 is “Double Tap”. See a zombie and shoot it and think it’s really dead? Don’t be shy with that second bullet my friend, put another one right between its eyes. And so on. Columbus meets up with Tallahassee (Woody Harrleson) and the two try their best to form a friendship. Things are going well until they encounter Little Rock (Abigail Breslin) and Wichita (Emma Stone). The two manage to hustle Columbus and Tallahassee, but eventually the foursome make their way out to California where the girls are headed. Are the rumors true that there are really uninfected in the Golden State or is the whole world full of zombies?

Zombieland works so well because it doesn’t, not even for one instant, try to take itself too seriously. The movie is about as tongue-in-cheek as they come and is there really any other way to go? It’s little things like Columbus’ rules flashing on the screen whenever they’re executed correctly. Admittedly, there isn’t a lot of screen time for the actual zombies and as with most zombie movies it’s all about the chase and avoiding the confrontation of them. As one of the writers tells us in the featurettes, the movie is like Midnight Run with zombies. And, amazingly enough, that’s a fairly accurate description. Zombieland will most likely become a cult-classic, but for right now it’s just a very entertaining film.

Sony’s 4K titles are easily the best-looking out of any studio, so I was pretty pumped to see what Zombieland looked like. I was hard-pressed to find anything wrong with the transfer and despite some deliberate choices by the filmmakers, this is a perfect transfer. From the opening “Sony” logo to the closing credits, the image seems to exude a 3-D like quality with fleshtones being near perfect, color balance is right on the money and the level of detail is simply amazing. Case in point, notice the “Hollywood” sign when they enter Los Angeles. I can make out every single letter and it’s not even the focus of the shot.

As one might expect with a zombie movie, there are plenty of gunshots to go around and light up all of your surround speakers. While the action isn’t that of say, a war movie, it is fairly robust and I found myself cranking my head to see where the gunshots were coming from. There are a few decent car chase scenes but aside from that (and the guns) the rest of the film is dialogue-driven. While not as impressive as the video, Zombieland’s Dolby Atmos track does manage to convey a very good soundtrack.

This 4K disc contains a few new supplements (though some appeared on a special edition from Best Buy) and ports over all the existing supplements from the initial Blu-ray.

It’d been a few years since I last sat down and watched this film and I’d forgotten how enjoyable it is. Even with the plethora of zombie movies out there, this one still manages to feel new, fresh and exciting. Add to that, there are some new supplements thrown in (or ones that were only available on a Best Buy exclusive disc) with an upgraded picture and sound and you’ve got something worth buying. 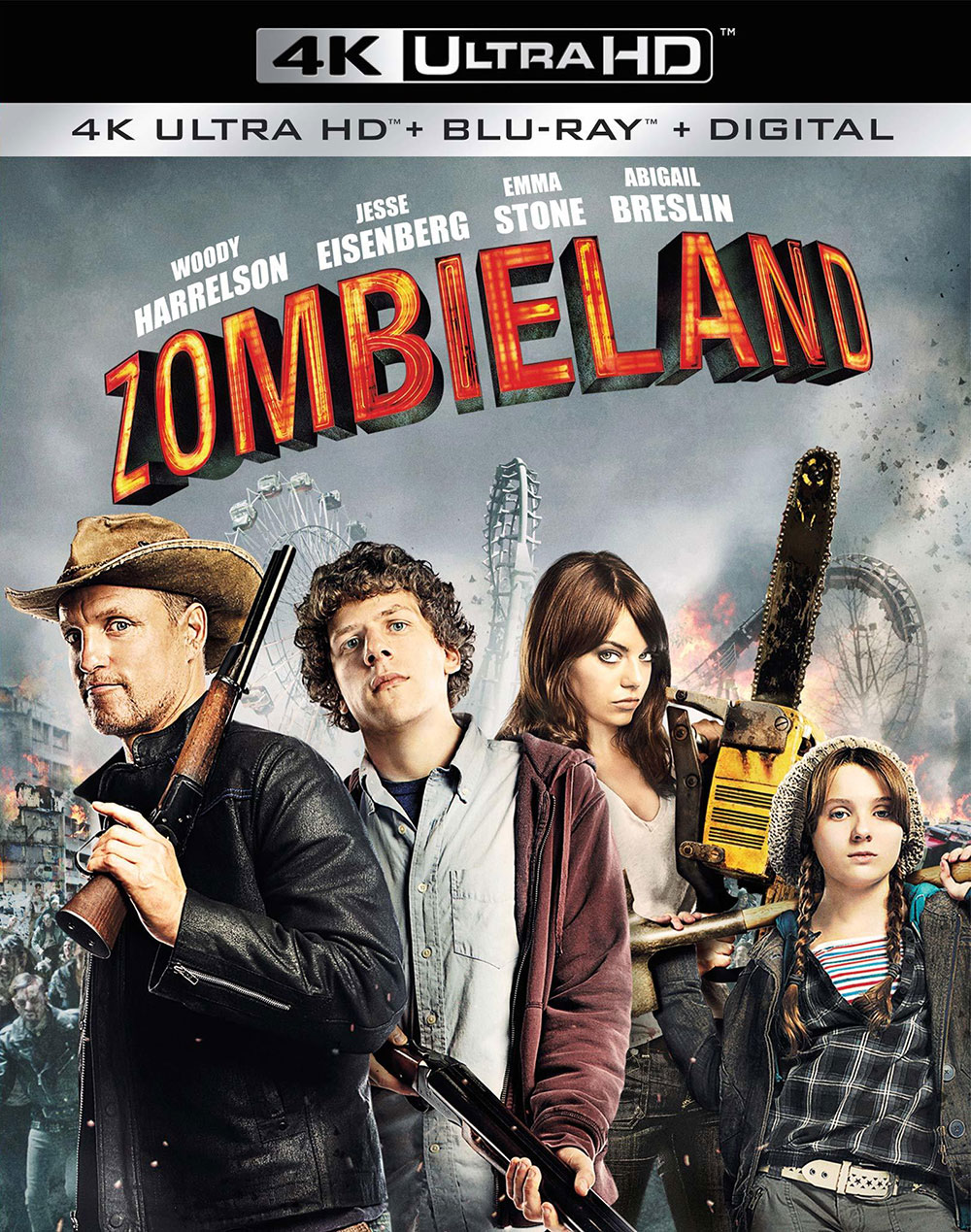