There are few movies released today that really achieve the moniker of “cult classic” just after they’re released. “Office Space” did it a few years back and some of the “Evil Dead” movies did as well. Perhaps one of the latest entries in this exclusive genre is “Shaun of the Dead”, a movie so fun to watch that I’m kicking myself because it took me so long to discover it. First off, I’m a big fan of zombie movies. Don’t ask me why. Vampires and zombies, yes I could fill a day (and have) with movies about those two fictional beings. However “Shaun of the Dead” is a bit different in that it’s a parody of zombie movies by incorporating humor into the plot. I mean, how seriously can you really take a movie that has the undead slowly walking after you waiting to eat your brains? Why not make it funny and have the best of both worlds? And that’s what the filmmakers did and did it perfect. Naturally the chemistry between stars Simon Pegg and Nick Frost is a key reason to the film’s success (so much so that the two would later go onto star in “Hot Fuzz”, more on that later). So the plot is set. Zombies. Drinking. Relationship troubles. And Ed.

We meet our antihero, Shaun (Simon Pegg) a salesman for a low end electronics store who’s employees don’t like or respect him. He’d rather hang out with fellow slacker Ed (Nick Frost) playing video games but whereas Ed has no desires whatsoever, Shaun at least has a few. Shaun’s in the process of trying to reconcile with his girlfriend (Kate Ashfield) after his procrastination ends up in disaster. Unfortunately for Shaun and everyone else, it seems that London has now been infested with the undead. Shaun realizes that this is his chance to prove himself to Kate (Ashfield), so he and Ed head across town to save her and her friends. They eventually end up at their favorite pub (the Winchester) and, lacking a plan, have no idea as to what to do or what will happen next. Can Shaun save the lives of his friends, defeat the zombies and manage to get his life back on track or is he doomed to a future of the undead?

“Shaun of the Dead” works on so many levels namely because of the cast and it’s supporting members. The writing is quick and sharp and Simon Pegg really works wonders with his part. His dry and sardonic humor work for his role here and Nick Frost’s Ed is right up there with some of the best lines the movie has to offer. This being a zombie movie, of course there will be violence but it’s so tongue in cheek (literally) that it’s next to impossible not to laugh. Compare this film with that of “Dawn of the Dead” directed by Zach Snyder. In that film the zombies are ruthless and blood thirsty and, get this, they actually run. “Shaun of the Dead’s” zombies are the exact opposite. They’re so slow and lethargic that the characters seem to think they’ve all the time in the world. Put it this way, in one scene Shaun and Ed have time to decide which records out of their collection to throw at the zombie in order to kill one. And, as mentioned before, their chemistry led to perhaps a movie just as enjoyable, “Hot Fuzz”. If you’ve never seen “Shaun of the Dead”, do yourself a favor and pick it up. You won’t regret it.

It’s time for this to go 4K! The palette used is fairly dim and dingy except for the reds, which I believe are purposely oversaturated. London looks as bleak as ever, though the detail seems to have benefited greatly from the HD transfer. I caught a few instances with a bit of dirt on the print, but they were few and far between. The wide scope of the movie looks great and this is one of the films that I could care less as to how it looks. It does benefit from HDR, but this is just one of those films that will never have that “pristine” look and feel to it that so many other films do.

Replacing the DTS HD Master Audio track from the Blu-ray is a new DTS X mix and while not the most robust soundtrack out there, “Shaun of the Dead” does have a few moments in which the audio really makes its presence known. The overall dialogue and effects are about what we’d expect, though the ending scene at the Winchester contains most of the film’s rememberable audio. Like the video, this is one of the films that I really don’t need all 7 channels blazing, just enough to hear the dialogue and I’m happy. Though in this case, it’s much more than that.

The extras are the same as the 2009 Blu-ray, though the commentary tracks (all four of them) have been added to the 4K disc.

For it’s initial release on DVD back in 2004, “Shaun of the Dead” was lacking in features compared to its UK counterpart. The HD DVD pretty much had more of the same, but it looks like this Blu-ray might have what we’ve been missing. The same two commentaries are present here as they were on the HD DVD version, the first with the cast: Simon Pegg, Nick Frost, Dulan Moran, Kate Ashfield and Lucy Davis is a hilarious track that is worth a listen. The group seemed to have so much fun making the film and it’s shown in this commentary. Next up is another track with Pegg and writer/director Edgar Wright which is a bit more engaging than the first track, yet a bit more serious as well. Two new tracks have been added, the first with Bill Nighy (who plays Pegg’s overbearing stepfather in the film) and Penelope Wilson. It’s a rather dull and, pardon the pun, lifeless track but it’s nice to have nonetheless. Lastly, we have a commentary by the zombies. Yes, you read that right. It starts off with moans and grunts but eventually does have words. I chuckled a bit, but my favorite was the cast commentary track.

Moving on we have some well-organized sections and the first is entitled “Missing Bits” in which we have some outtakes and “Funky Pete” which I’ll leave that to you to discover. More interesting are the “Plot Holes” in which the actual plot holes are explained and then laughed at by the actors. Next we have the “Raw Meat” section in which we have several video diaries by Simon Pegg, Lucy Davis and Joe Cornish. These are interesting, though I’ve never been a huge fan of the video diaries. We are treated to some cast tapes and some featurettes on the makeup and special effects used in the movie as well. The “Extras” section has a hodgepodge of supplements which feature Coldplay and some fake television spots. We also have “Remembering Z Day” which features the fake broadcast by the newscaster in the film. We also get a Zombie gallery with some teaser trailers and poster art. Lastly, Universal has included their U-Control which has a storyboard comparison and a Zomb-O-Meter, present in the HD DVD version.

Shaun of the Dead is what’s called an “instant classic.” It’s been a decade and a half since its initial release and remains as enjoyable now as it was then. As with most 4K catalog releases, there’s an uptick in audio and video quality with the same supplements included. Fans of the genre, or this movie in particular, should run (albeit very slowly) to pick up a copy. 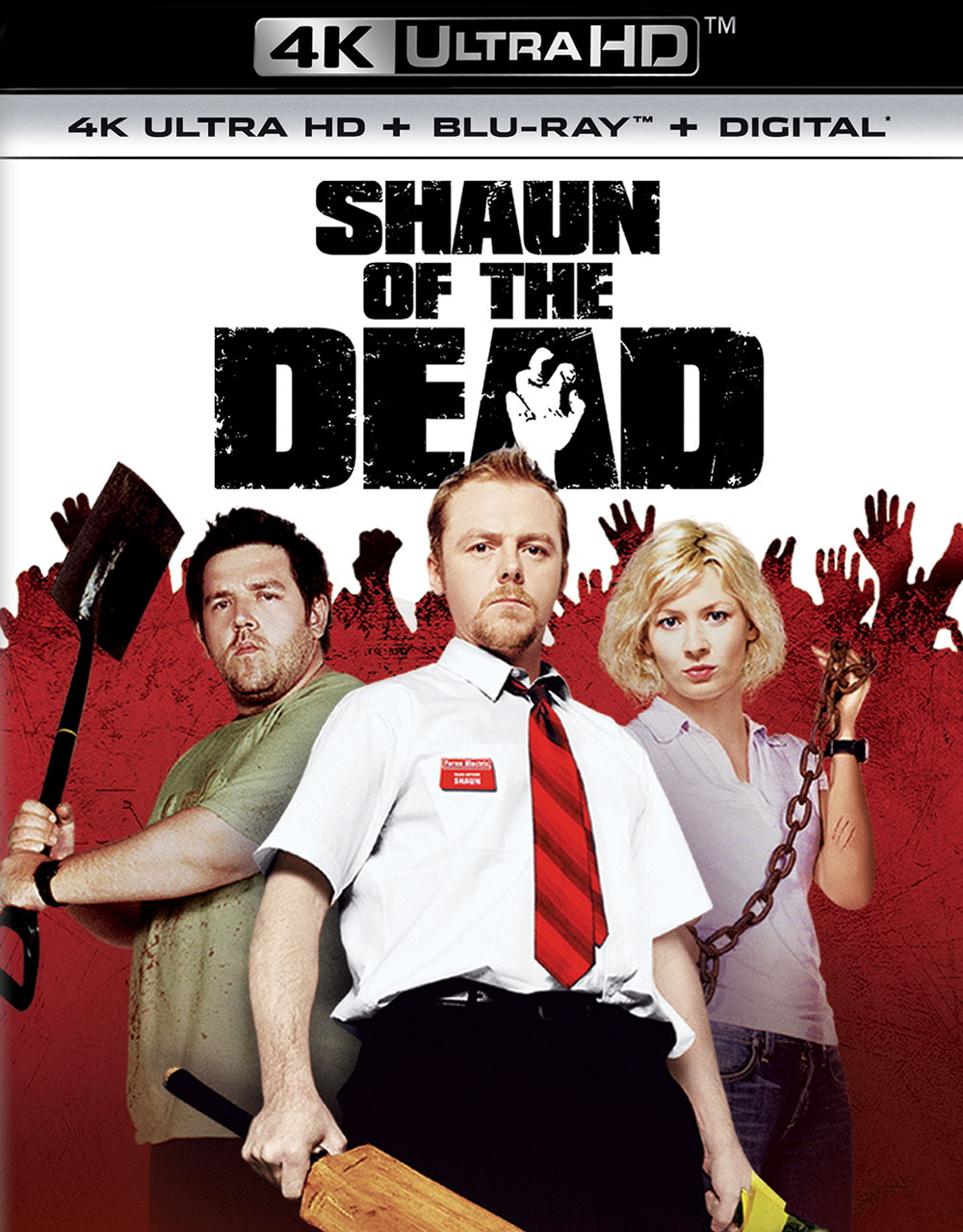