Every year there are event movies. Movies that are either so anticipated and/or hyped, that anything short of perfection is looked at as a failure (unless you’re a Hollywood studio executive and the numbers aren’t in the red). There were many expectations placed on Batman vs. Superman: Dawn of Justice, so many that it would have been next to impossible for the movie to deliver to fans and please them all. And it didn’t. But financially-speaking, it was a winner. It raked in nearly a billion dollars worldwide, which is a feat that’s becoming less and less impressive. Still, while perusing some online reviews of this film, I came across something that described it to a tee. I won’t re-invent the wheel either. This movie serves as the DC version of Iron Man 2 in that it sets the stage for the future expanding DC universe titles as well as laying the groundwork for some solo films to come. Wonder Woman will get her own movie as will the Justice League (read: DC’s version of The Avengers). There’s more to this film than the Man of Steel duking it out with the Dark Knight, though that is the central theme and, well, the overall allure of it. Though the movie serves as more of a sequel to Man of Steel, it clearly has a place in the ever-expanding DC comics universe. And it introduces us to the most badass version of Wonder Woman yet. And we’ve got yet another actor playing Batman, this time in Ben Affleck. That’s a lot to live up to.

I will preface this review by saying that I had not seen the film in theaters and I chose to watch the 3 hour extended cut as opposed to the theatrical cut.

The events of the film take place where the final battle of Man of Steel took place. We see Superman (Henry Cavill) as he manages to defeat General Zod (Michael Shannon) and levels the city of Metropolis in the process. Bruce Wayne (Ben Affleck) looks on in horror as he watches the destruction and the countless lives lost as the carnage unfolds. Bruce takes this personally and seeks to set out to destroy Superman and make him pay for the damage and destruction he’s caused. But Superman has his own problems. Not only is he trying to manage a relationship with Lois Lane (Amy Adams) (via his alter ego – Clark Kent), but he’s also been instigated in the massacre in a small African village, one that Lois barely manages to escape. Things don’t improve when Superman attends a hearing that ends in yet another catastrophe, this time at the capitol building. But all it takes are a few scenes with Lex Luthor (Jesse Eisenberg) to realize that he’s the one pulling the strings. He’s discovered some Kryptonite, enough to do some major damage, and has the intelligence and resources to pit Batman against Superman. And who will be standing when the dust clears?

Honestly, there’s a LOT going on in this movie. Too much, in fact. It tries to be everywhere and do everything (like the constant battle that plagues Superman, I’d imagine). That, I think, was the main downfall of the film and in particular, the theatrical cut of the movie. The extended version does seem to offer a lot more explanation to some of the scenes, why they took place and what some of the other character motivations are. I don’t know why this version wouldn’t have been in theaters, if you’re going to get someone to sit in a seat for two and half hours, how much more difficult would another thirty minutes be? Still this film, while not perfect, is all about the future and to the point – expanding the DC comic universe. They saw what Marvel did with their films and it’s no coincidence that they tailored their films and even comics (the entire DC comic book line, which has been in place since the 1930’s, has been rebooted with 52 titles) to match this new model. Cavill does a fine job donning the iconic red cape and, despite initial criticism, I think Ben Affleck managed to make a great, if not much darker version of Batman. Throw in Gal Gadot as Wonder Woman and the stage is set – literally.

There are four different video formats in which this can be viewed, and this Ultimate Edition that Warner sent includes two of them. The DVD and the Blu-ray (non-3D version) are what’s covered here, though a 3D version as well as a 4K version are out there (and many “exclusive” variants depending on where you choose to buy this title). Never let it be said that Marketing isn’t important.  Ok, that said I had high hopes for this film. The included 2.40:1 AVC HD image uses a variety of cameras (it was shown in IMAX as well) so while some scenes epitomize the HD format, others contain a fine layer of grain that shows that traditional film was uses as well – good! The sheer scope of some of the scenes requires this be a very “wide” film. As much as I’d have liked to see the screen filled, it just makes for a better movie-going experience this way. Colors are bold and bright despite the dark nature of the film. Detail is stunning, the intricate pattern on Superman’s outfit are so precise that you can actually make out the Kryptonian words (no kidding) in parts. Conversely, Batman (and Affleck goes through the film with a perpetual 5 o’clock shadow) and his costume are equally as impressive. Some of the scenic shots of the city beg to be seen in HD and 4K, and I really found no fault with the way this looked. My only complaint is that the overall transfer for the film was a tad bit inconsistent, and that’s mainly due to the variety of filming sources they used. No matter, though, it’s a stunner no matter how you look at it.

Ok, who are we kidding here? This is one of those films that you sit back, turn up the volume a few more notches than normal and let the movie take you for a ride. The Blu-ray includes a Dolby Atmos track that also contain a Dolby TrueHD track for those that are unequipped. As it so happens (now) I am so equipped and let me tell you that the result is about as stunning as it gets. I think the only way I’d have felt more “in” the film is if I was actually in the middle of things. The soundstage is so active and dynamic, my head was turning every which way. Surrounds (top and bottom or high and low, however you want to classify the Atmos setup) are simply amazing at converting the information. Rear surrounds give added ambiance to the battle scenes as well as some subtle nuisances like rain pouring or the gravel being thrown up by the Batmobile. Vocals are pure and crisp and when Batman’s voice is heard, it booms. It was actually suggested that Ben Affleck use the voice device in the film because his natural voice was considered a bit too high for that of the Dark Knight.  Odd. At any rate, there’s nothing wrong with this or the included Dolby TrueHD mix. Prepare to be amazed.

Note: The three disc set includes the DVD and two Blu-ray’s. The theatrical disc contains all of the supplements and the Extended Cut contains that version of the movie only.

Taking a not so subtle cue from the success of the Marvel Universe, the DC Universe is just now starting to spread its wings and take some shape. While the film might not have lived up to everyone’s expectations, I actually enjoyed it and look forward to see where this takes us. Admittedly I kind of rolled my eyes when I saw Wonder Woman on the cover, but after seeing her in action, well, let’s just say she’s got a new fan. The extended cut of the film certainly improves on the theatrical cut and the disc offers up reference-quality audio and video presentations. Add to that a solid selection of extras and you’ve got a title that should be on your shelf. 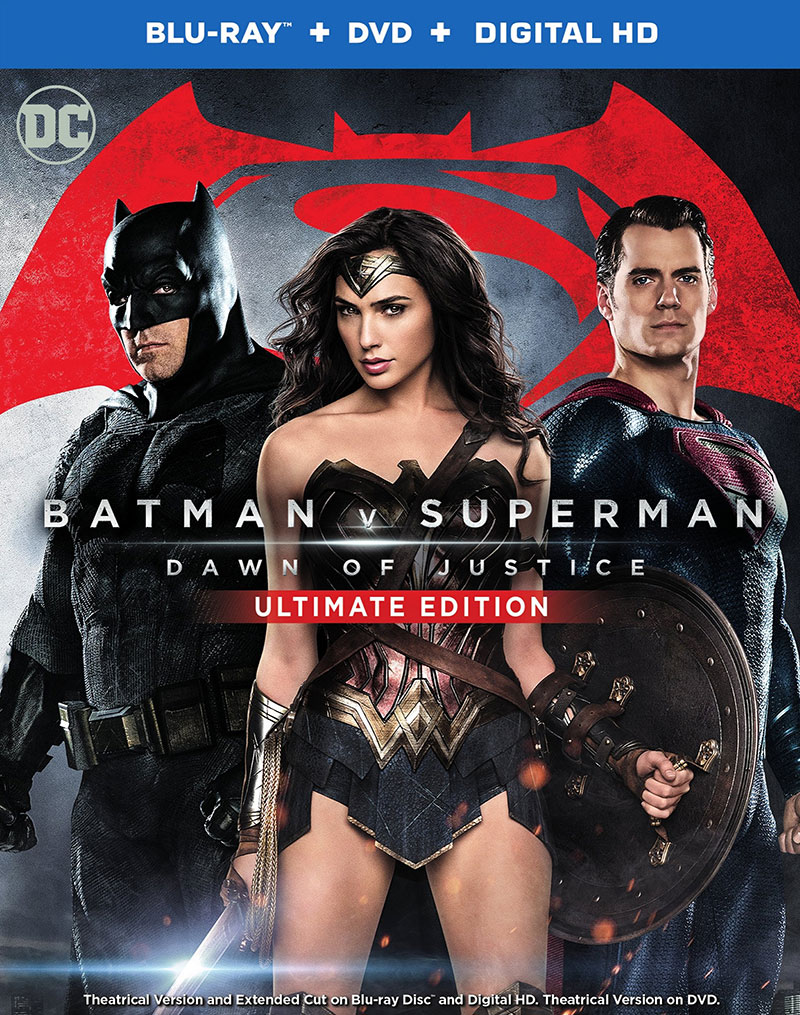