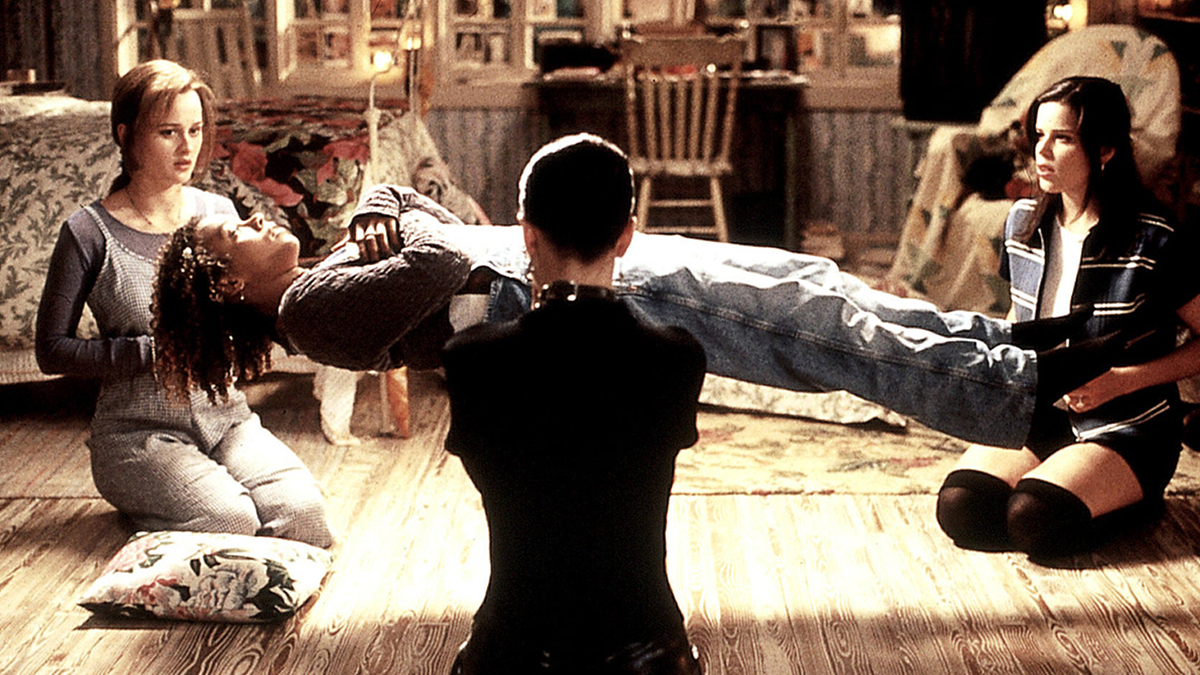 It seems that movies about witches have always seemed to feature some unattractive woman who has a giant wart on her nose, rides a broom and squeals “I’ll get you my pretty…and your little dog too”. Now, obviously that’s from The Wizard of Oz, and it’s not about witches…well sort of. That one image, that one sentence did develop some sort of stereotype for all the witches to follow (in the movies, that is). Of course, witchcraft dates back several thousand years, and became “most popular” a few hundred years back in Salem, Massachusetts…and we all know what happened there. But with releases like Matilda, Practical Magic and Hocus Pocus the craft, as it’s known, has had a bit of a lighter side to it. In this movie entitled by the same name, we meet four ordinary girls who have already embraced their spirituality. They consider themselves witches, but have yet to complete their “inner circle”. Somewhat of social outcasts, they seclude themselves to corners and hanging out by themselves, only to still get mocked by the cheerleaders and football players.

It’s not until Sarah (Robin Tunney) moves to town and starts going to school that things start to happen. Sarah, whose mother died while giving birth to her, has had a troubled life. She has a caring father, loving step mother, but is obviously upset and depressed. After an attempted suicide, which has occurred in the past, the family feels it necessary to relocate from San Fransisco to the Los Angeles suburbs. Sarah, an attractive girl, seems to fit in nicely, but can’t really seem to find her niche. After a failed date with Chris (Skeet Ulrich) who tells lies about their date, she meets the other three witches of the school. Sarah has never really considered herself a witch, but has always had inclinations towards the supernatural. She admits that if she had really wanted it to rain, the water pipe would burst, or if she wanted people to shut up, she would go deaf for a few days…not exactly your average teenager. Knowing instantly that they have their fourth (and compete) part of the puzzle completed, the girls start casting spells on others. The spells seem innocent enough, but they soon learn that a spell cast has the results thrown back at them three fold. Hence, a spell cast to make Chris like Sarah, turns Chris into an obsessive, love-driven machine. All seems to be going well at first, the girls have more self confidence and don’t feel like the recluses they once did. Bonnie (Neve Campbell), who was scarred by fire as a child, has had to keep herself covered up for fear of ridicule. Rochelle (Rachel True), has had to endure constant criticism from the blonde-haired cheerleaders at diving practice and now it’s time that the foursome can have their revenge.

But, as they learn, what goes around comes around. The foursome start to disagree on certain things; and at Sarah’s suggestion, the group is not that anymore. The supposed “leader” of the group, Nancy (Fairuza Balk) is obviously of the darker nature. Having been born for this part, she is great in her role here. It’s Nancy’s constant overzealous behavior that scares Sarah out of the group. As things have finally started to go their way, it’s almost over in a blink of the eye as things happen to Chris and others that spells were cast upon. Sarah, doing what she believes is the right thing, goes her separate way and all of the sudden it’s her against the other three. To tell anymore would be to give away the ending, and I don’t want to do that. I will say that The Craft is a lot better than I expected, hence it’s surprise success in early 1996. An interesting plot, great cast and great special effects make The Craft one you should pick up.

If memory serves, it’s been a while since this has gotten a decent release on Blu-ray. Shout! Factory usually takes good care of their titles, so I was pretty excited to see that The Craft had made the cut. This appears to be the same transfer from the previously-released Blu-ray and while the picture handles the darker shades with no problem, I found that the indoor scenes a bit on the dim side. While only a few scenes take place during the day, the group shots of students look very clear and clean as well. There are several scenes that take place in an occult bookstore that has a very strange light, almost shot in a very natural, brownish hue, to give it that “old” look. I’m not sure if this was done on purpose, though it would tend to make sense. It’s not bad by any means, but this would have been a great candidate for a 4K restoration.

The previous Dolby Digital 5.1 track has been replaced by a DTS HD Master Audio mix. It’s been quite some time since I have seen the film and, as such, wasn’t sure what to expect on this viewing. There are areas and/or scenes in which the audio does take control, notably some of the later scenes when the action starts moving along. Vocals seem nice, rich and true and the front stage handles the majority of the effects. This is a passable track that has a few moments of glory, but on the whole it’s not really too memorable.

A few of the features have made the leap from the previous Blu-ray edition to this one, though some new ones have been added.

Time hasn’t been to kind to The Craft. I remember seeing it in theaters way back when and each of the stars have enjoyed varying amounts of fame since the film was released. The effects are a bit dated, the new Blu-ray shows its age (and it shouldn’t), but the addition of several new features should give fans a little bang for their buck. If you want to see an all male version of the film, check out The Covenant. Or better yet, don’t.