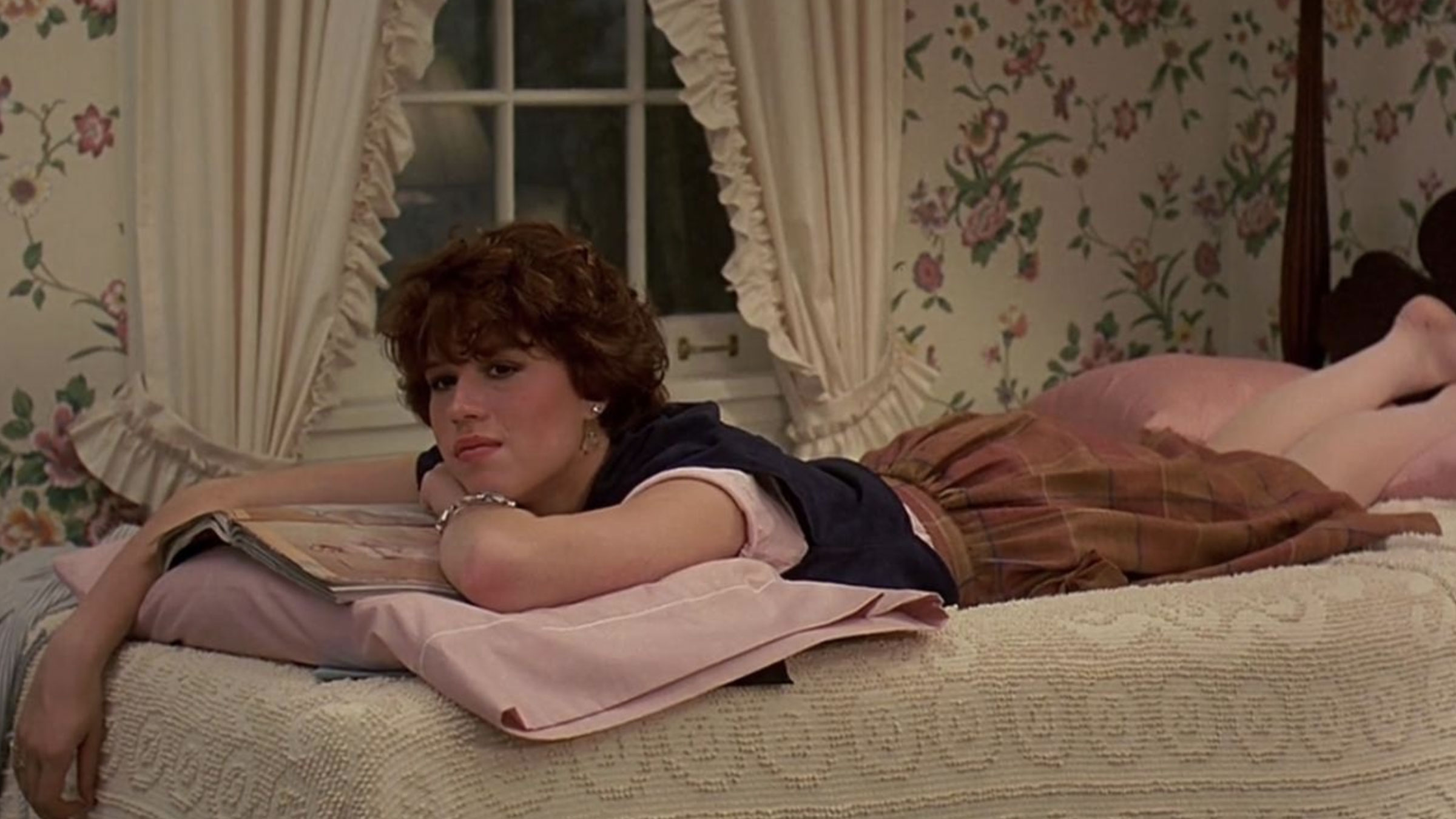 I think all of us at some point in time have either forgotten someone else’s birthday or had ours forgotten. That is the problem Samantha Baker (Molly Ringwald) faces in Sixteen Candles. She feels as if she’s having the worst day of her life. Her older sister is getting married and that’s part of why they’re preoccupied. Things don’t end there, however. A note revealing very personal things about her gets picked up by Jake Ryan (Michael Schoeffling). It reveals that Samantha has more than a little crush on him. I could say more about the film’s plot, but being as how it’s now 2015 and this film has been around since 1984, I imagine most people have seen it more than a few times already. Part of the fun is also being surprised by many of the shenanigans on display.

This film marked the Directorial debut of the late John Hughes. Molly Ringwald as well as Anthony Michael Hall (who also stars in this film) made many films with him, capturing the nickname “The Brat Pack”. I’m still unsure of what my favorite film by Hughes is, but Candles is definitely high on the list. One of the things that works in most all of the John Hughes films is that they have their heart in the right place. It truly captured what teenage life was like at the time. I don’t think any review of this film could really do it justice; there’s simply so much to praise. There’s a running gag every time the character Long Duk Dong (Gedde Watanabe) shows up. There’s also the very poorly timed wedding involving the older sister. Hall does great work here as the geek who wants to show off to his friends that he hooked up with Samantha. After all that, I haven’t even touched on the central romance between Samantha and Jake Ryan. I have no clue why Schoeffling didn’t continue his acting career, because he fits the role perfectly here. I don’t know why Hughes stopped making films when he did, but this serves as a bittersweet reminder of the kind of films they just don’t make any more. It lacks the crudeness of a lot of modern teenage films and really tackles what High School life was like.

This is now the third offering of this movie on Blu-ray, it was previously put out by Universal in 2012, then again in 2019 as a 35th Anniversary Edition which featured the exact same VC-1 encode. Arrow has taken this film and done it right, sourcing a new 4K transfer from a scan of the original negative. The result, of course, is stunning. For comparison, I broke out my 2012 Blu-ray and did a few side by side “tests.” The Arrow version is much cleaner, has more detail and a greater color saturation while the Universal disc looks stale and grainy by comparison. I felt that the Arrow transfer has more of a film-like quality to it and thus, the image is the best I’ve ever seen for this film. When it comes to new video restorations, Criterion and Arrow do it right.

There are three different versions to choose from on this disc:

The English mono is uncompressed, whereas the DTS HD Master Audio seems to be the same one on the Universal disc. More interesting is the “Home Video Version” (more detail on that below) which restores ten of the songs used in the film. So if your only exposure to this film has been on cable television or VHS, then this one is a treat. Having said that, this isn’t a film that’s made for dynamic audio. The mono track does a fine job with crisp, clear vocals and while the range is limited, it was a different experience watching this with the “Home Video Version.” This was a nice touch.

Arrow is giving Criterion a run for their money when it comes to supplements. In addition to the re-mastered video and the option of watching the extended version, we get a slew of new features made specifically for this Blu-ray including the original alternate video soundtrack. Let’s dive in!

John Hughes’ first outing as a director is, for many fans, their favorite. The Breakfast Club usually gets all of the attention when it comes to his films, but there was something about this one that always brings me back. Arrow’s disc looks and sounds good and the addition of the “Home Video Soundtrack” is the icing on the cake (get it?). The addition of the new extras only sweeten the deal. For any fan of the film, this is the version you want. I’m not crazy about the cover art, but I’ll let that one slide.