Once Upon a Time in…Hollywood (Blu-ray)

Believe it or not, I rarely make it to the movie theater. This is not by choice. The struggle to manage a family and perform my job duties makes it incredibly difficult to sneak away and catch a film. In order to catch a movie it typically involves a lot of planning and you better believe that the movie must be something that I was just dying to see on the big screen. I think I only saw two films in the theater this year. In the case of Once Upon a Time in… Hollywood, I attended the first afternoon showing on the first day it came out. I am a huge Quentin Tarantino fan and there was no way I would miss catching his ninth film in the theater. I am happy to report that it did not disappoint.

The film begins on February 8th, 1969. Actor Rick Dalton (Leonardo DiCaprio) is on a downturn. His career is starting to slide. He was best known for playing the hero gunslinger Jake Cahill on the NBC television show Bounty Law, but now he is being subjected to playing villains and bit parts on shows like Lancer. Rick has developed a drinking problem that threatens to derail his career if he doesn’t get it in check. Along for the ride is his trusted stunt man and best friend Cliff Booth (Brad Pitt.) Cliff has become Rick’s driver because Rick had too many drinking and driving incidents. Rick is also known for playing an eye patched hero in a war picture called The Fourteen Fists of McCluskie. In a meeting with Rick, producer Alvin Schwarz (Al Pacino) tries to convince Rick that he needs to go to Rome so that he can play the lead role instead of the heavy. The advice stings Rick to his core. As Rick tries his best to mount a comeback and perform well under pressure in Hollywood, Cliff finds his own difficulties landing work due to a nefarious rumor and some previous bad behavior on some sets. Cliff’s fortunes are tied up in the success of Rick’s career. As hard as Rick has it, Cliff has it much tougher with far less he can call his own. Rick has a house in the hills whereas Cliff has a trailer in Van Nuys behind a Drive-In where he lives with his  pit bull Brandy. Rick lives on Cielo Drive next to a beautiful actress named Sharon Tate (Margot Robbie) who lives with her husband, director Roman Polanski. As they all deal with their own issues and live their lives, the hippies at Spahn ranch are hanging out with a strange guy named Charlie. By the end of the film, fate will bring all of them together.

Once Upon a Time in… Hollywood is phenomenal. This is Quentin Tarantino’s most painstaking love letter to his beloved city of Los Angeles. The sights and sounds of the film have a time travel effect on the viewer as Musso & Frank Grill, Playboy Mansion, El Coyote, and Spahn Ranch come vividly to life as they would have existed in 1969. On the radio, there are ads for the film version or Ray Bradbury’s The Illustrated Man. Music by The Rolling Stones, The Stooges, Simon and Garfunkel, Joe Cocker, Bob Seger, Chad and Jeremy, and so many more artists rifles through the air playing out of car stereos and small radios. The fact that Sharon Tate listens to Paul Revere and the Raiders is not by accident. It is a deliberate choice by Tarantino. There is not a detail out of place. It is truly remarkable.

To achieve the effect, Tarantino developed a dream team. Production designer Barbara Ling and cinematographer Robert Richardson find the magic. They relied heavily on the remaining landmarks that survive still in Hollywood, but they also built facades of many of the long lost restaurants and sites from that era. I have considered Robert Richardson one of the greatest living cinematographers for a long time, but I believe this will probably be considered his finest achievement. I could not keep a smile off my face as I saw posters with films like Romeo and Juliet, and The Mercenary, or when the film referenced director Sergio Corbucci. The greatest achievement in the film may be a sequence in which the lights of many signs light up on long gone landmarks.

The writing of the film takes a surprisingly laid back route to getting where it is going. When speaking to others who had seen the film, the chief criticism of the film was the pacing. Personally, I didn’t want to leave this world and I don’t think Tarantino did either. Watching a character whipping down the highway and seeing the old Tower Records store lit up again may not hold significance to every viewer but students of history and film lovers should find something they can fixate on in nearly every frame. I found the pacing pleasant. I enjoyed it even more the second time around. The last third of the film hums at a good clip. The other criticisms leveled at the film have been laughable. Critics upset about the Bruce Lee scene are way off base. As a child I read a comprehensive biography of Bruce and nothing his likeness says in this film was out of sorts from actual things Bruce Lee said in real life. The media storm on that fictional encounter was just ridiculous. Critics upset about the finale or the ideas behind it can similarly be dismissed. As critics fail to realize that films are still primarily designed to entertain and as they try to make every movie a “message” film they will inherently destroy the joy of watching a good entertaining story unfold. I found the criticisms of this movie particularly galling. It just felt like all of these people were trying to make a name for themselves by shaming a work of art. Honest to God – it irked me.

The performances in the film are epic. Brad Pitt plays the coolest character since his performance as Tyler Durden. This is a different type of cool – more effortless and laidback. When the finale comes, Pitt delivers the goods. He is awesome in this role. Leonardo DiCaprio continues to prove himself one of the finest actors of his generation. His freak out involving hippies on a dead end street and a margarita in a blender may be the funniest scene of any film this year. The film is full of strong supporting performances by actors including Al Pacino, Luke Perry, Austin Butler, Emile Hirsch, Timothy Olyphant, Lena Dunham, Kurt Russell, Bruce Dern, and so many more. A little girl named Julia Butters for a brief moment steals the film with her confident performance that reminded me a little of True Grit. She will be a talent to watch for in the future. The direction by Quentin Tarantino brings this ensemble cast together in a wonderful way. His delicate handling of Sharon Tate with Margot Robbie’s performance is a good example of an artist maturing. While the film received criticism for the lack of dialogue for Margot, I felt that these critics did not see the amount of restraint Tarantino was exerting by painting in broad strokes.

Overall – this is a great example of when everything goes right in a film. The writing, direction, acting, production design, and cinematography are the best of this year. In fact – this is the best film of 2019 and one of my favorite films this decade. I can not recommend it highly enough.

Do you think Quentin Tarantino will ever NOT shoot on film? With everything going digital, this is “old school” but it doesn’t look it. The 2.39:1 AVC HD encode is simply stunning from opening to ending. The meticulousness of Quentin Tarantino shines here with all the details showing up in crystal clear 1080p. The set design, production, costumes and even little things like the interiors of cars – they all look great. Colors are rich and robust and black levels are spot on. This is one beautiful film.

Tarantino’s films are more visual and less about the audio. Let’s face it, none would really qualify as “audio powerhouses.” Still, the included DTS HD Master Audio soundtrack faithfully reproduces all the sound with pinpoint accuracy. Vocals are crisp and clean. Just hearing Leonardo Di Caprio and Brad Pitt’s dialogue on screen together is a real treat. Surrounds are used fairly sparingly and the front stage takes the burden of the mix. It’s a good, nice-sounding track that’s sure to please. Of note, this is the Blu-ray reviewed but even if you ante up to the 4K version there’s no Dolby Atmos mix, it’s the same DTS Master mix.

Once Upon a Time in… Hollywood is an absolute masterpiece. As I expected, the film is even better the second time around. In this film, Brad Pitt is the epitome of cool – channeling Paul Newman and Redford in their prime. Leonardo DiCaprio gives an excellent performance that rivals his work in The Wolf of Wall Street. The star of the show is the meticulous recreation of Los Angeles in 1969. Tarantino packs a million tiny details into every shot and made me feel like I had been transported back fifty years. The production design and cinematography are unparalleled. This is Tarantino’s greatest love letter to his city and the world of his childhood. Some critics have criticized Tarantino for letting the film take its time or for the violent finale in which Tarantino takes liberties with historical events. To those critics I simply say – move over. You’re blocking the show for the rest of us. In my opinion this was easily the best film of the year. This is a release that I will be revisiting each year. Is it his best film? If it was any other director it would be such an easy answer. 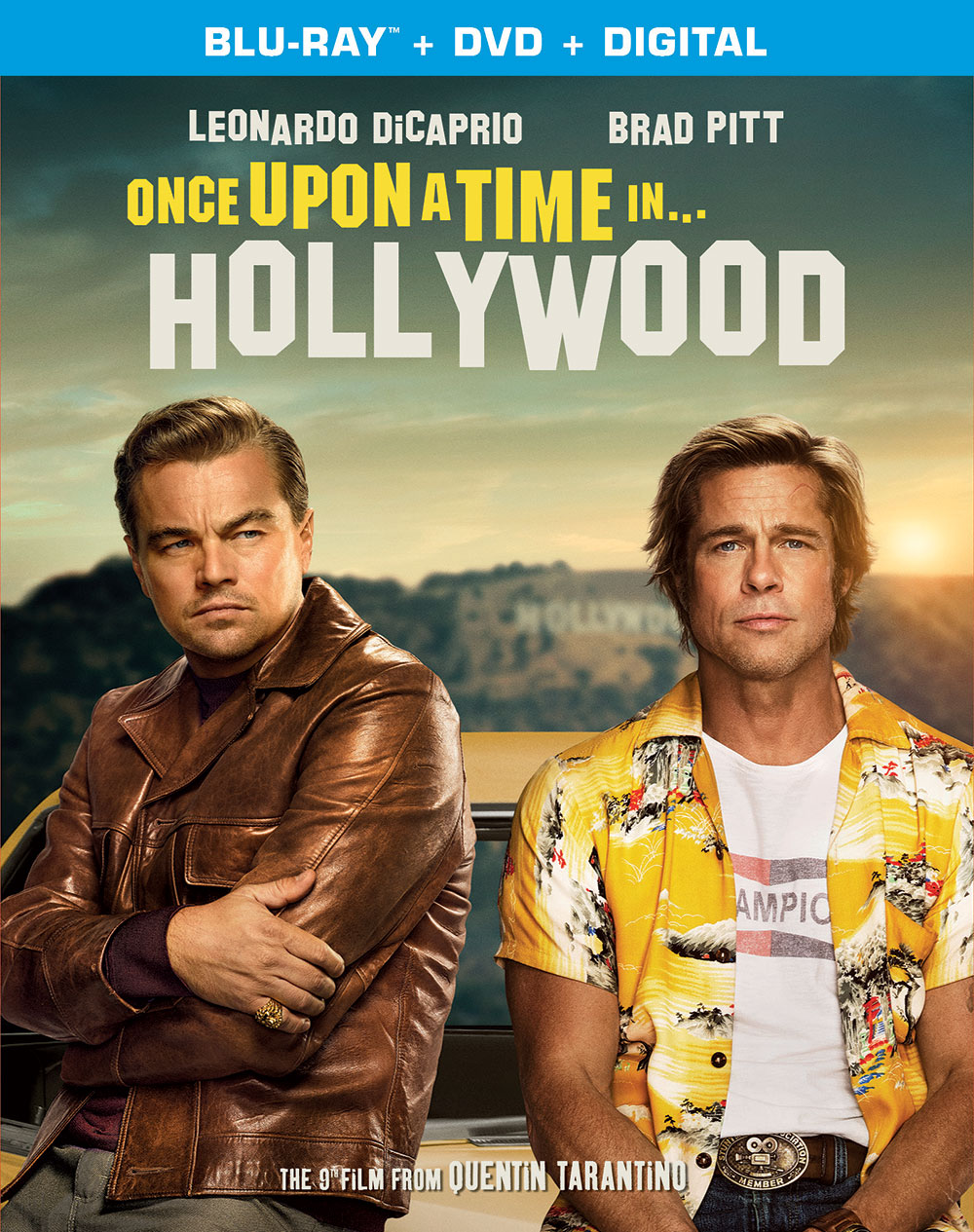