The Wolf of Wall Street (Blu-ray)

I love Martin Scorsese. I love Leonardo DiCaprio. I love that these two have collaborated on five films and I’m sure there’ll be more.  For all the remakes, television shows turned into movies and everything else that annoys me – these two make films worth seeing.  I remember skipping one of my college classes and going to see What’s Eating Gilbert Grape. This is probably why I failed the class. But I remember being so impressed with the performance by Leonardo DiCaprio that I thought he was actually a mentally-challenged actor in real life. Nope, just an exceptional one.  One of his most underrated performances was in This Boy’s Life with Robert DeNiro and Ellen Barkin.  Maybe this pairing of DeNiro and DiCaprio got Scorsese’s attention?  Like most great actors, DiCaprio picks his projects very carefully and working with a directing legend is certainly a way to go. I have no idea why DiCaprio has been snubbed by the Academy four times now, but perhaps it’s that he’s so consistently amazing in his roles, it’s hard to really assign an award to just one.  Whatever the case, I think I might have found a new favorite Scorsese/DiCaprio collaboration.  Fasten your seat belts, it’s going to be a bumpy ride!

DiCaprio plays Jordan Belfort, a young and eager stockbroker with eyes on the future.  Things are going well for him when he finally gets his series seven license. It’s about that time that the stock market crash of 1987 hit.  He’s out on the street. At the advice of his wife, he takes a job at a small firm where he excels.  He starts to earn a bit of money and then forms his own company.  Life is good.  He meets neighbor Donnie Azoff (Jonah Hill) who sees a pay stub and immediately quits his job to join Belfort.  Life is better.  As the company grows, so too does Belfort’s ego.  No doubt he’s the charismatic face of the company, but also it’s biggest proponent. The heyday of the early to mid 90’s suits Belfort’s lifestyle to a tee.  He leaves his wife for quite possibly the most beautiful girl on the face of the planet, Naomi (Margot Robbie). Life is amazing! But life can’t be amazing forever. It’s not long until the FBI starts investigating Belfort’s company. With every rise there comes a fall and no one fell harder than Jordan Belfort.

Of all of Scorsese’s films, I’d heard that The Wolf of Wall Street was the one that most closely resembled GoodFellas (my personal favorite Scorsese film).  In a way, it does.  I can see where the movie would polarize audiences. I’d heard that people hated it and others that loved it. I’m one of the latter. There were times when I was laughing so hard, I literally had to pause the movie to catch my breath.  The first time Jordan meets Donnie. The extended discussion about the midget-tossing scene in the boardroom.  The scene where Donnie ad Jordan take Quaaludes. I was crying! Now what’s really strange is that I heard everything in the movie was true. If it was in the film, it happened. The performances in the movie were flat out amazing. If Leonardo DiCaprio was good, Jonah Hill was nearly his equal. Odd to think that Jonah Hill has half the Academy Award nominations that DiCaprio has. At three hours, the film is quite an investment, but I simply couldn’t get enough.  This is truly Scorsese and DiCaprio’s most crowning achievement and it’s one that I’ll watch a couple times a year. Highly recommended.

As we might expect from a major studio, The Wolf of Wall Street is just about perfect in every way. The 2.40:1 AVC HD encoded transfer shows literally no faults and showcases the ups and downs of the life of Jordan Belfort.  Colors are bold and bright, detail is amazing (just try and point out a flaw on Margot Robbie’s body – which you see quite a bit of).  Contrast and black levels work well off another.  A few scenes had the slightest bit of grain, but considering the length of the film, I’m willing to give it a pass. Suffice it to say that in a movie where a man eats a goldfish, you’ll want the most pristine picture quality possible. And Paramount has delivered the goods.

Equally as impressive as the way this looks is the way it sounds. The DTS HD Master Audio mix is simply stunning from beginning to end.  Surrounds offer tons of support from the literal parade of craziness in the office scenes, to some rather awkward moments later on.  LFE are also involved with some bass.  Those that have a fondness for  the songs of the early 90’s need not worry, we’re treated to some of those classic hits and they sound amazing.  Vocals are top notch as well with DiCaprio’s flat New York accent taking front and center.  Truly this is a top notch effort.

About the only thing that disappoints are the supplements (or lack thereof).  But let’s take a look at what’s included. 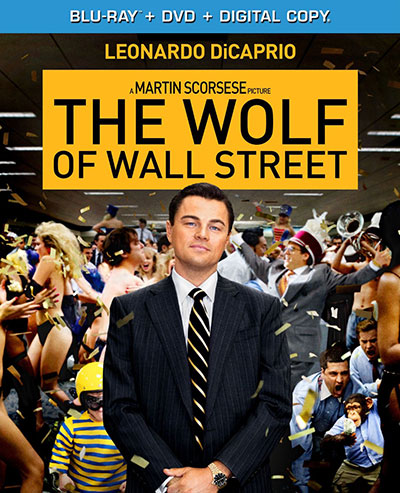