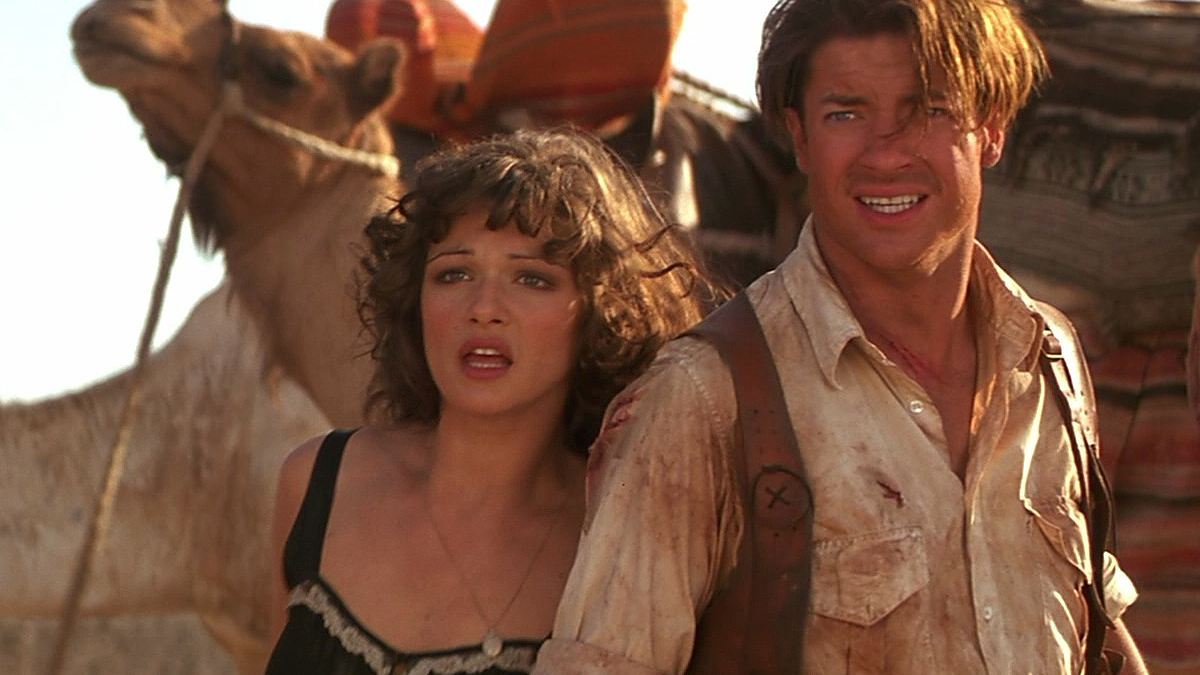 For reasons unknown to me, I’ve never really gotten into The Mummy franchise of movies.  After all it has already inspired a spin-off in The Scorpion King which, of course, is a major component of a movie franchise these days. The films aren’t bad in the least; they have high-flying action, CGI effects out the wazoo and plenty of action and adventure. To me, they just feel “manufactured” and that’s about the best way I can describe it.

The movie is loosely based on a film of the same name from 1932 and the plot doesn’t deter too much from that one. We meet Rick O’Connell (Brendan Frasier), an American serving in the French foreign legion who can’t help but stay out of trouble. He winds up with Evelyn (Rachel Weisz) and her brother Jonathan (John Hannah) and the trio is interested in trying to discover the lost city of Hamunaptra. Little do they know that another team is interested in the same thing and they’re playing for keeps. Rick mistakenly awakens the “Mummy” who we met in the prologue of the film and, as they say, he’s back and he’s madder than hell. Chaos ensues and now Rick, Jonathan and Evelyn are fighting to get out alive and keep the mummy hot off their tails.

After watching the film again, I have to admit that it was a little better the second time around. Try not to take everything too literally and just sit back and enjoy the action (what, you mean you’re supposed to suspend your disbelief while watching a movie?) and it’s a good ride. I’ve been a fan of Rachel Weisz for years and though she’s gone onto bigger and better things, I had totally forgotten that she was in this movie. Granted she now has the moniker of “Academy Award Winner” attached to her, but she did a good job here and she and Frasier played off each other very nicely. If you can handle all the CGI effects and are in the mood for an Indiana Jones knockoff, you could do a lot worse than The Mummy.

This is one of those titles that will grace every format and it’s time for its Ultra HD/4K release. If ever there’s a movie in which HDR works in favor, it’s got to be one like this. I really noticed an overall improvement in color, texture and overall dynamic range. Detail seems improved as well. The 2.35:1 HEVC image has certainly benefitted from the upgrade. While there are a few “blips” here and there, the overall image left me with a good impression. It’s well worth the upgrade just to see this in 4K.

The DTS HD Master Audio track from the Blu-ray (also included and therefore still present there) has been replaced with a DTS X mix.  Dialogue is rich and robust and I don’t think nary a scene went by that the surrounds weren’t emitting some sort of effect. The battle and fight scenes are obviously the heart of the film and they sound amazing, with clanging, bashing and even a few explosions here and there. Plenty of gunfire resonates as well and this all adds up to an amazing audio experience.

I’m sure it’s no coincidence that this movie is coming out on the same day that another title is. But hey, I understand it’s the movie business and if you can sell it once, you can sell it again (and again). This is basically a 4K version of the previously-released special edition and no new content has been included (shocker).

On one hand it’s nice to have this in a 4K format and with the plethora of supplements to boot. Unfortunately, there are no new ones so if you’ve watched the previously-released disc, you’ll have seen it all. But I found this version of The Mummy far more enjoyable than the Tom Cruise version. If you’re all about how it looks and sounds (like me), then this might be worth it as the film looks and sounds better than ever before.