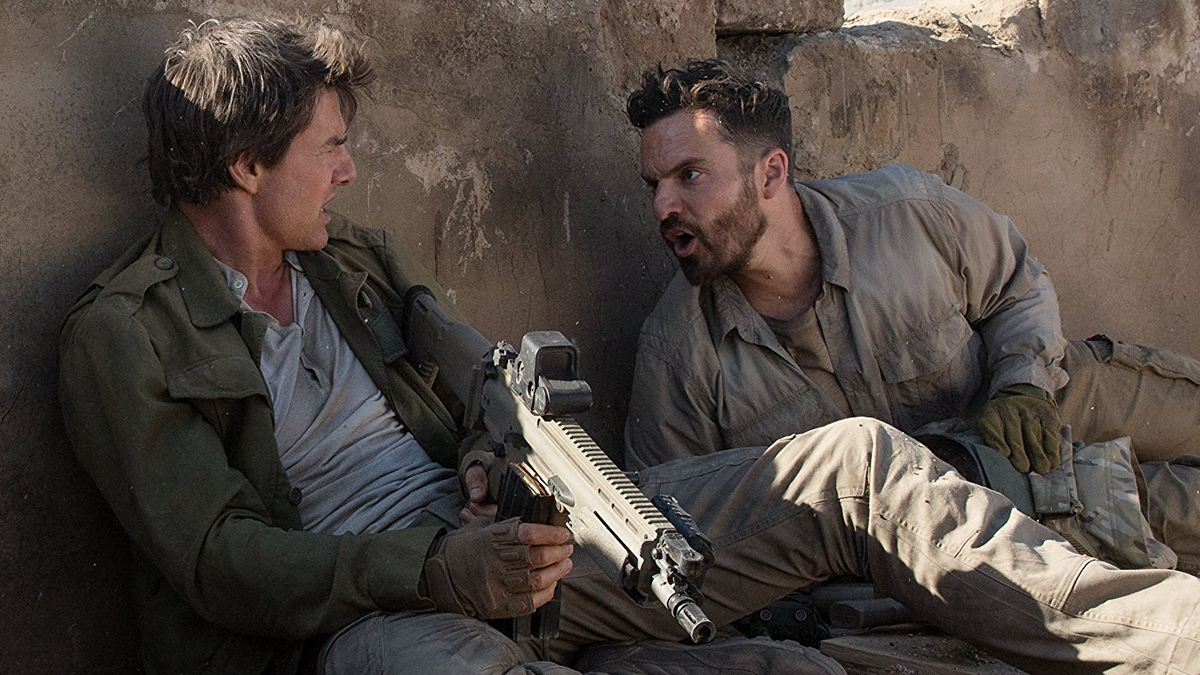 I’m a Tom Cruise fan. There I said it. Cruise has managed to maintain his status in Hollywood for nearly four decades by making wise choices with his roles, producing and he’s got that “it” factor where he’s men and women tend to like him equally (but probably for different reasons). Admittedly, back in his earlier days, he essentially pioneered the “cocky young guy” role and played it to a tee. Movies like Cocktail, The Color of Money (still my favorite Tom Cruise film) and even into the 90’s with movies like A Few Good Men. Granted, he knew how to play these parts and it’s served him well. With the new millennium, Cruise has been on more of a sci-fi kick if you leave out the Mission: Impossible films. His collaboration with Steven Spielberg gave way to movies like Minority Report and War of the Worlds. Delving even further into the sci-fi genre, we then got movies like Oblivion and Edge of Tomorrow. And that brings us to the present where Universal is now trying to replicate what Marvel did with their universe. The goal? To build a “Dark Universe” based on their classic monster films. Hmmm…

Cruise plays Nick Morton, an Army sergeant who seems to derive some pleasure from pilfering valuable antiques from Iraqi locations. He, together with partner Vail (Jake Johnson), manage to unleash Ahmanet (Sofia Boutella) by mistake and must now stop her with the obligatory blonde, Jenny Halsey (Annabelle Wallis). If you’re wondering who Ahmanet is, the prologue gives us her backstory. She feels that she was cheated out of her birthright and therefore embraced pure evil, killing her husband and child. She was them imprisoned (mummified, if you will) only to be unleashed by Nick and Vail. Of course, shenanigans ensue, there are chases, plane crashes (which, admittedly is pretty amazing), gunfire and such. And since we know Tom Cruise, no matter how conflicted his character is, is the ultimate “good guy”, it’s a matter of when and not if, he’ll prevail.

You can’t fault Universal for trying to “get in on the action” with their universe of monster films. There’s even a not so subtle character within this movie who may or may not have his own film in the future. The box office and reviews for this film weren’t exactly flattering. Fear not, Cruise won’t be damaged by a bad movie or two. The question I kept asking was “why?” After just seeing the early 00’s version of The Mummy and its sequels/spinoffs, I have to wonder why we’re once again being subjected to this film? At least the Brendan Frasier version had a little Indiana-Jonesy humor thrown in. This version has none of that and it shows. While The Mummy isn’t a terrible movie per se, there was just no need for it. Even considering the sheer number of Universal’s monster films, why start with one that’s still fresh in everyone’s mind? Will we see more of the “Dark Universe”? As of this writing, I’d say not.

Subject matter aside, it’s hard to fault the way The Mummy looks. Its robust $125 million budget put some more money in Tom Cruise’s pocket, but it’s also a CGI powerhouse that looks pretty damn good on Blu-ray. As we might expect, most of the action takes place in the middle east and, as such, we’re treated to a lot of earthy tones. While there are some interior shots, they exude detail, giving them a razor like appearance. Cruise (and Crowe) aren’t getting any younger and even as good as they both look, the detail is such that we can see some wrinkles, grey hair and the like. It’ll be ok, guys. The wide 2.40:1 AVC HD image looks spot on and I was hard-pressed to find anything wrong with it. This is made for your home theater.

Thankfully Universal hasn’t left out its Blu-ray buyers and has embodied the disc with a Dolby Atmos soundtrack. And yes, it rocks. As with most instances of a Dolby Atmos mix, there’s sound coming at you from every direction. And that’s the point. Vocals are pure and rich, atmospheric surrounds swoosh by you every few minutes and you really get a sense that you’re in the film. It’s a great experience. All that aside, I have heard better. I wanted this to be a 10, but it’s just…not. No matter, you’ll get your money’s worth out of this one – that’s for sure.

The Mummy falls squarely into the “we didn’t need it” category. It’s a movie no one wanted or asked for. But it is still a “Tom Cruise” film and it’s worth seeing, if only once. I have no idea if this will be enough to continue Universal’s “Dark Universe” – time will tell. With reference-quality video and audio, however, your home theater will get a workout.