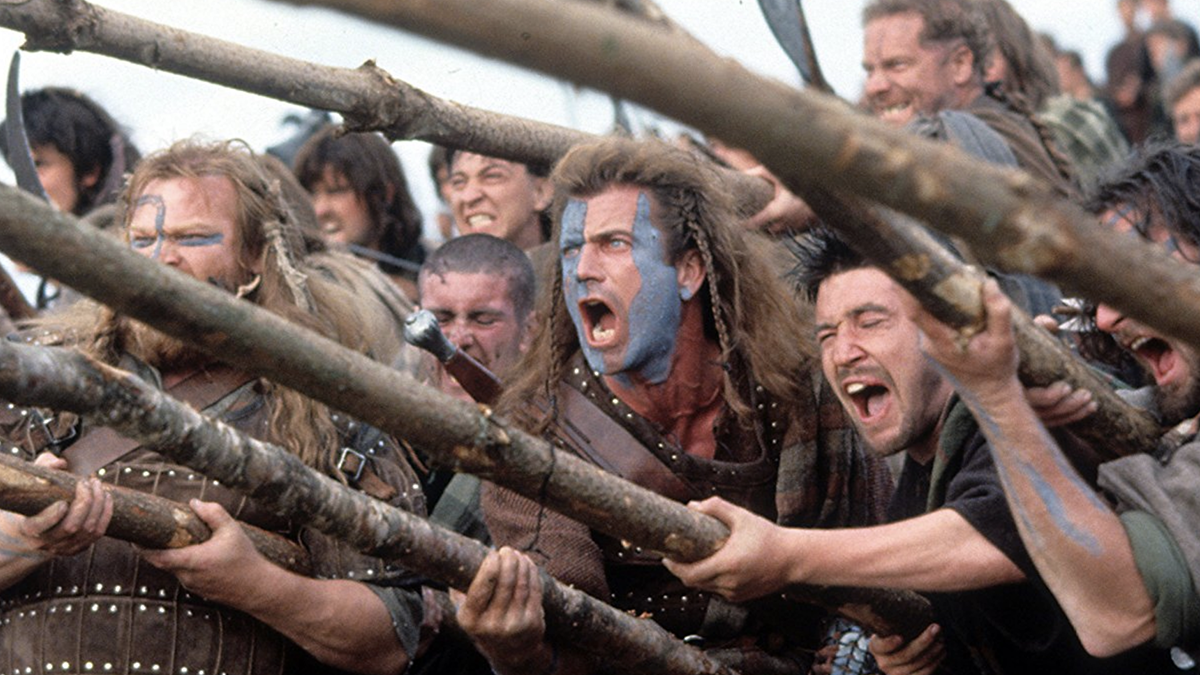 Scotland is locked under the iron hand of English control, as Edward the Long Shanks (Patrick McGoohan) exercises his power in cruel fashion whenever possible. As a child, William Wallace (Mel Gibson) lost his family to the English soldiers, but now he has returned back home as an adult to start a new life. He re-connects with Mirran (Catherine McCormack), with whom he shared a bond in childhood, sparking an instant romance. The two marry in secret, but a tragic turn occurs when English soldiers attempt to rape her and when she resists, she is executed. Now Wallace, who simply wanted to farm and start a family, must follow his heart and lead an uprising against incredible odds. But even with his boundless passion for freedom, can he lead his fellow Scots in a rebellion, or are the English just too much?

Now this is how you create an epic. Braveheart is a modern masterpiece, a powerful epic that combined brutal violence with genuine emotion, a rare feat in this genre. The film was nominated for ten Oscars and took home five, including Best Director for Mel Gibson and Best Picture. While a slew of star studded epics were unleashed in its wake, to me Braveheart remains the finest and it still retains its full power. Even twelve years later, Braveheart is powerful with its emotional content, from the loss of love to the thirst for true freedom. Gibson’s direction is superb and he plays the lead with immense skill, he proves here is a force in cinema and to me, this is his crowning achievement. This an epic of course, which means battles and few films can boast the kind of raw impact and brutality of the ones here. Simply put, the film excels on all fronts, from the story to the direction to the visuals to the cast, things just fall into perfect order.

Making its debut on Ultra HD, this Best Picture winner sports a new 4K transfer that fully takes advantage of and embraces HDR. This new version sports richer, warmer colors, so the greens look lush and the blues just shine. The colors really enhance the landscape shots, with a more natural, beautiful presence. The flesh tones get a more accurate spin out of this too, which is great news. The print also looks cleaner here and by turn, we have sharper, more refined visuals all around. It’s a beautiful visual experience and the best the film has ever looked.

We get an upgraded Dolby Atmos soundtrack that replaces the previous DTS HD Master Audio soundtrack found on the Blu-ray. There’s more depth to this track than in the past. The bass kicks often and kicks hard, which also adds to the experience. Also in powerful form is the musical score, which sounds excellent here and has an ideal level of presence. No issues with the lower key elements either, as vocals sound great and small scale sound effects are accurate. Swords clang, fires burn and everything in between sounds rich, lush and pure. A wonderful example of sound.

Films like Braveheart don’t come along that often and when they do and are done right (and this was), it’s the reason why we see movies. Paramount’s 4K presentation is nothing short of spectacular. Like Gladiator, it’s a bit disappointing that no new material was produced for this release, but what’s included from the previous versions is more than enough.