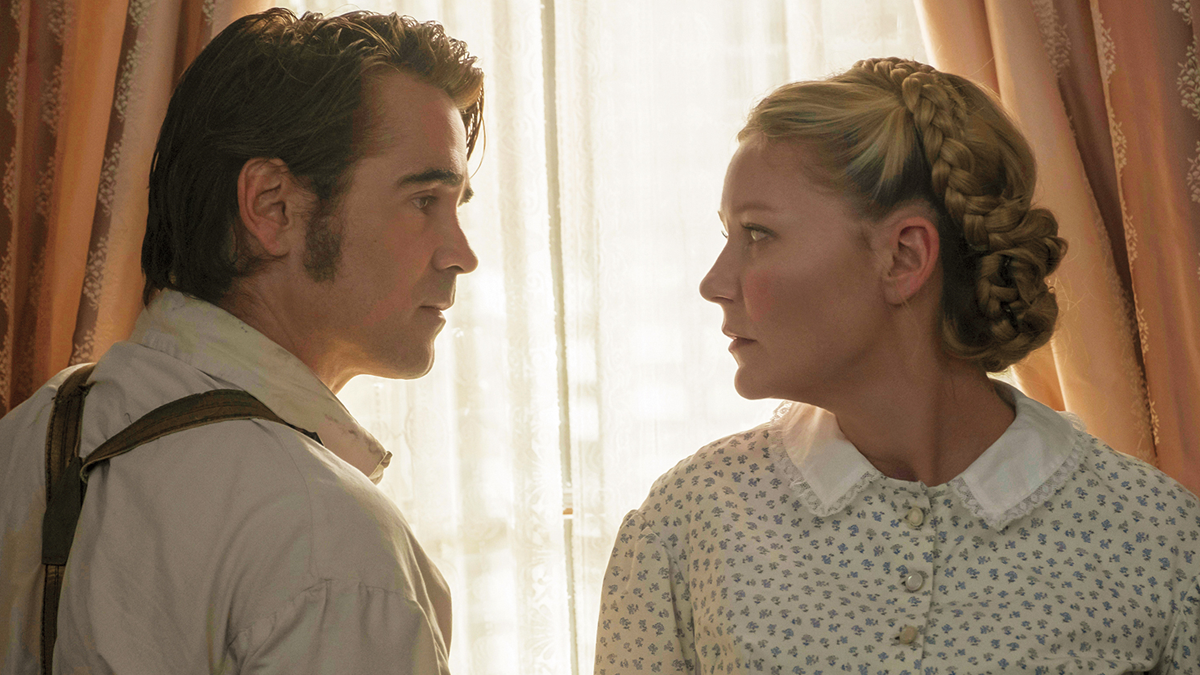 It’s been a while since I’ve seen a film by Sofia Coppola. Certainly the last name resonates Hollywood royalty, but she’s managed to escape from her father’s shadow and has become an accomplished filmmaker in her own right. I loved the eerie feeling that 1999’s The Virgin Suicides gave me and, like others, was swept up in Lost in Translation. Admittedly, Marie Antoinette didn’t really do it for me and I’ve yet to see The Bling Ring. That brings us as current as the film in question, The Beguiled. If the title rings a bell, it’s no coincidence since Clint Eastwood and Don Siegel made the film in 1971 right smack dab in the middle of Eastwood’s Dirty Harry days. The story hasn’t changed – much, but with Coppola at the helm, it’s got a different approach.

Adapted from the novel by Thomas Cullinan, the film is set during the Civil War deep in the heart of Virginia. A wounded Union corporal (Colin Farrell) is found and taken inside a nearby boarding school. The staff, led by Miss Martha (Nicole Kidman), debate whether or not to turn him over the Confederate Army which will invariably lead to his death. On the other hand, they can keep him around and use him for all sorts of manual labors. Arguably, the presence of a handsome male disrupts the seemingly normal routine (or as normal as a routine can be with a war waging a mile away) and as the girls, notably Alicia (Elle Fanning), begin to flirt with him, he uses this to manipulate them.

Naturally there’s a bit more going on, but to ruin one of the few surprises in the film wouldn’t really be fair now, would it? And it should be said that Coppola does come from a different direction than in her other films. There’s a palpable element of “girl power” here and she’s not afraid to show it. The main three actresses: Nicole Kidman, Kirsten Dunst and Elle Fanning are all excellent in their respective roles and Farrell seems to be ok with being one of the few men surrounded by them (and who can blame him). When I first watched the film, I wasn’t too sad to see it end. Upon further reflection, it does seem to radiate with me. I don’t know if it’s the power of the performances or Coppola’s direction, but there’s an element of…something there. Give it a try.

This is the second film I’ve seen recently that’s failed to stretch across the width of the screen (the other, if anyone is curious, is A Ghost Story). There’s nothing wrong with that, of course and I have to applaud the filmmakers for putting out a movie in the oft-used 1.66:1 aspect ratio. Bra-vo. However, as the opening credits rolled, I was instantly taken by Philippe Le Sourd’s amazing cinematography. The man is an artist. The Spanish moss drips off the trees in Virginia (though the movie was shot in New Orleans) with the rays of light poking through them. What this movie lacks in color it makes up for in a very etherial and almost “dreamy” look and feel. The palette is on the muted side, all the ladies appear to have pasty white skin, though the costume design looks top notch. There’s a bit of vignetting to some of the outdoor scenes, but it’s all part of the bigger picture (pardon the pun). I had to go back and watch some of the scenes again as this is one beautifully-shot picture.

This won’t win any awards for sound design. The included DTS HD Master Audio soundtrack is, for all intents and purposes, more along the lines of a mono mix. The entire film is dialogue-driven. We get a few moments of “action” in the form of a single shot from a gun. There’s really no ambient noises to speak of other than some wind in the trees and some distant cannons intermittently break the silence. Granted, you don’t need to have mindless action spewing forth from every channel and this is definitely a “less is more” approach. It clearly serves its purpose, but don’t expect to be blown away.

I had no previous knowledge of this film, its antecedents in book and film form (i.e. the Clint Eastwood 1971 movie) and had no idea as what to expect. While not “bad” by any stretch, it just seemed to creep along at a snail’s pace – or maybe more pertinent to the film, a turtle’s. The performances are great, it’s hard to knock Nicole Kidman, Elle Fanning, Colin Farrell and Kirsten Dunst – all accomplished actors. But this had me looking at my watch and waiting for something – anything – to happen.