I’m willing to bet that if anyone on the face of the planet was allowed to ask one question and get an honest answer it’d be something along the lines of “what happens when you die?” Possible variations might include “Is there a God?” or “Is there a Heaven/Hell?” In essence, it’s all the same question and no one reading this knows the answer for sure. Movies about ghosts are about as old as, well, movies themselves. There’s something about a ghost or a haunted house that arouses our primal urges and/or fears we have about the unknown. Having seen nor heard nothing about David Lowrey’s A Ghost Story, I only read the press release and was glancing at the cover of the Blu-ray. It stars newly-adorned Best Actor winner Casey Affleck and Rooney Mara. And it’s got a ghost on the front, you know the kind of Halloween costume you wore when you were five by cutting out a couple of eye holes in old bed sheets. Interesting. This will either be really good or really bad, but I don’t feel that I’ll be scared.

We meet a seemingly happily-married couple who we only know as C (Casey Affleck) and M (Rooney Mara). They’ve just moved into a new house and seem to be enjoying life but C is killed in a car accident. We don’t know how or see/hear it happen, but he’s gone. M identifies him at the morgue, leaves and then we see him rise up. It’s then that he (we assume) gets back to the house (we don’t know how) and watches as M goes through the grieving process. There’s a scene in which she eats an entire pie, then heads to the bathroom and gets sick. C can’t communicate with her, nor can she see him. He does see another ghost and the two communicate, only briefly, via subtitles. What’s going on here?

There are a few things I can’t and won’t mention about the plot as it ruins the film. And that’s no fun.  I will say that this is an interesting movie and one that stays with you when the credits roll. I like those. They’re my favorite. And I’ll also say that this could have been a very bad movie, but there’s just…something about it that I can’t put my finger on. It avoids the usual pratfalls of having C try and communicate with M or saying trite, clichéd phrases like “I’m right here!” There’s none of that. Part of the allure of this film and others like it is that there’s no definitive ending. The filmmakers don’t tidy everything up. The movie, like death, is somewhat of a mystery.

The film has a very unique look and feel to it. First off, it’s presented in full-frame. Yep, 1.33:1 with a bit of a “16mm” effect with the rounded corners. I kept waiting for the image to fill the screen, but it never happened. Lowrey admits in the IMDb trailer commentary that this was intentional and it does suit the rather odd nature of the movie. Colors are bland and void of most brightness, for obvious reasons. It seems to have some overexposed shots that give an Instagram look to some of the scenes. It’s a surreal look, for sure, but I think it works here.

Likewise the included DTS HD Master Audio soundtrack won’t blow you away with its dynamic range. And, oddly, the longest amount of dialogue comes from a minor character who rambles on and on about life and death. Affleck and Mara have maybe 30 lines of dialogue in the entire film. The majority of the sound comes from the very subdued score, which seems to amplify the somber mood of the film. Feel free to turn this one up, your pictures will be safe on the wall.

This is an odd film, to be sure. Nearly a day after my viewing, I still can’t get it out of my head. I don’t know what it is about it, but it just…lingers. Casey Affleck and Rooney Mara are the headliners, but they oddly don’t have a lot of screen time, especially together. There have been movies in the same genre, but never quite like this. Like Under the Skin or The Lobster, this is just an oddity that seemingly exists. 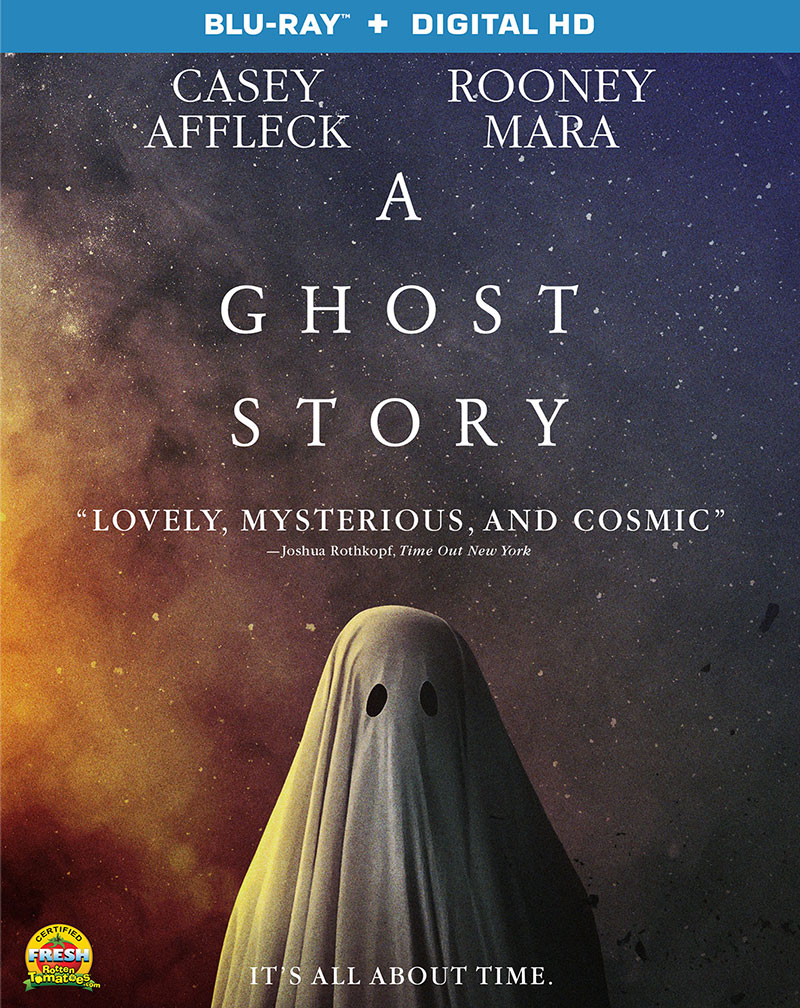