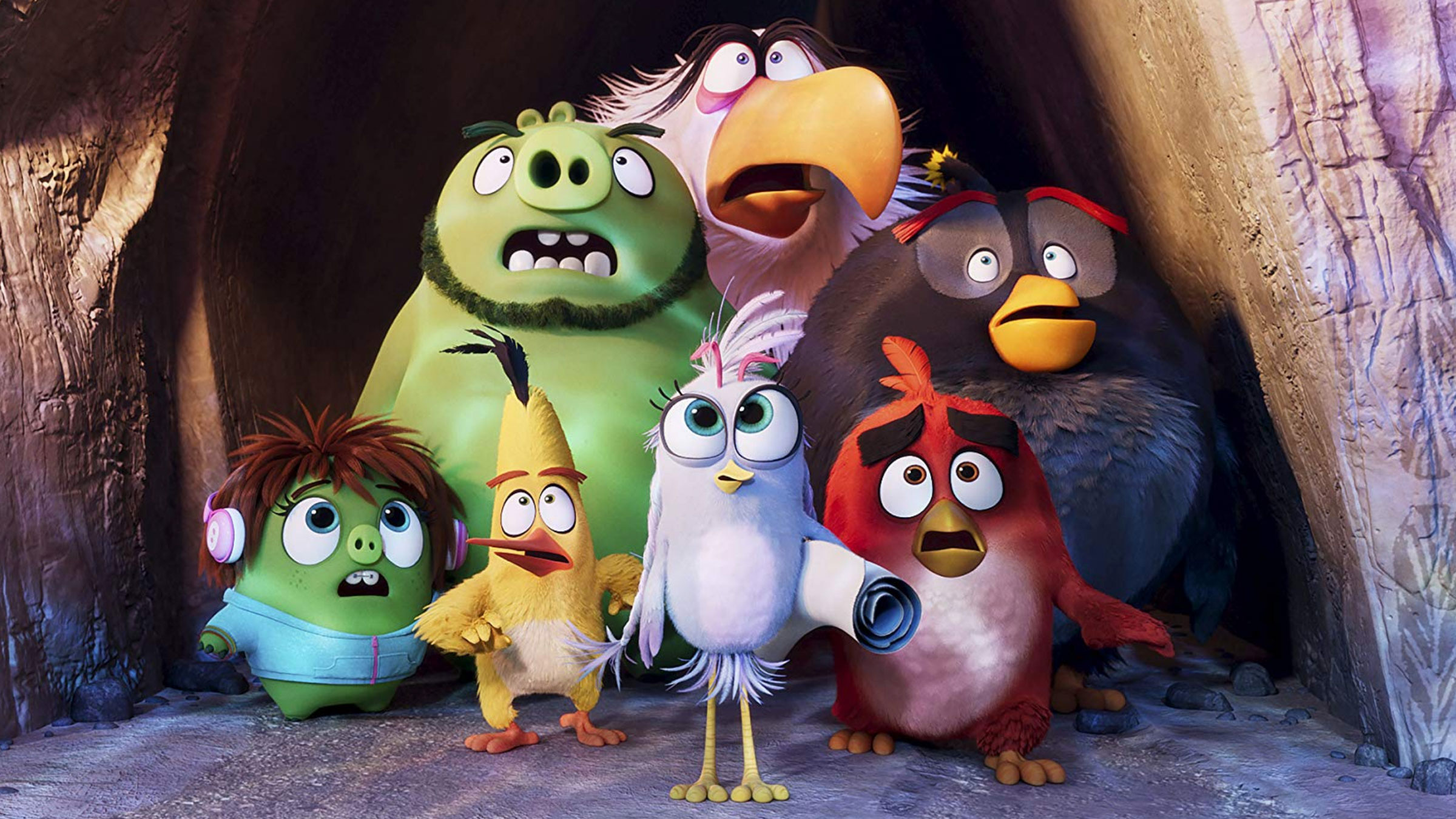 At one point in time it would seem inconceivable that a movie could be based off a mobile game. But times, they are a changin’ and we’ve now got a sequel to 2016’s The Angry Birds Movie. It won’t challenge anyone’s intellect to figure out the paper thin plot, then again it’s not supposed to. Aimed at a younger audience, or an audience who tends to spend time flinging birds on their “lunch hour” (raises hand), the film gathers all of our candy-colored birds together once again to face a new foe. We’ve all got our vices and once upon a time (i.e. before mobile devices) we’d pick up a book or magazine. Nowadays we pick up a tablet or a smart phone and simply pay to play our favorite game. Be it Candy Crush, Angry Birds or any of the other myriad of games out there – they’ve all permeated our mainstream culture. Let’s face it, they might be here to stay.

Having saved the day in The Angry Birds Movie we find Red (voiced by Jason Sudeikis) the hero of the town. Once an outcast, he’s now praised with posters as far as the eye can see. The conflict with the pigs has devolved into a prank war with Piggy Island. Led by Leonard (voiced by Bill Hader), the dueling birds and pigs must now put aside their differences as they now have a new foe in common. We meet Zeta (voiced by Leslie Jones), the occupant of a third island who’s determined to find warmer climates than those of her frozen abode. Zeta launches balls of ice at the other two islands in an effort to clear them out for, well, her. This forces an uneasy alliance between the birds and pigs. Red, along with a ragtag group of “heroes” including Bomb (voiced by Danny McBride), Silver (voiced by Rachel Bloom), Leonard and Chuck (voiced by Josh Gad) try to save the day – and their world.

Patrons (and I say that in the most literal sense as Rovio is undoubtedly a cash cow) of Angry Birds 2 will no doubt get a kick out of the film. Most all of the playable characters are represented here, even Hal (yes, I chose to give Hal some credit even though he’s a horrible bird to play with). Underused are the big red bid, Terrance and his “wife” Mathilda (voiced by Maya Rudolph). But that’s OK. We’ve got the Hatchlings, a group of the cutest birds ever to grace the screen, to take their place. Gone are the logistics of how to translate a mobile game to screen, rather we’ve got a more traditional plot line. We’ve also got some odd pseudo relationship between a seal and a dog frozen in ice. The less said about that the better. If The Angry Birds Movie was right up your alley, this is effectively more of the same. If not, there are plenty of other mindless flicks (and games) to pass the time.

I’ve been a longstanding believer in that most (if not all) computer-animated films (Pixar, Dreamworks, etc.) simply look amazing on any TV or HDTV I’ve had. And Angry Birds Movie 2 is no exception. In fact, I really don’t know why this was released on 4K since the Blu-ray looks fine for my needs. I did, however, choose to watch the film in 4K but had to switch back to the Blu-ray to review the supplements. Go figure. But what can I say that we don’t already know? The picture literally explodes with color. The green of the pigs, the texture in Red’s feathers and the grains in the sand. They all look amazing. Add the HDR with a bit more color saturation and contrast and you’ve got yourself a winner. If you want the best-looking version out there, the 4K is the way to go, but if I walked into a room with two televisions with one playing the 4K and the other Blu-ray – I ‘d be hard-pressed to figure out which is which.

A DTS:X, the competitor to Dolby’s Atmos, track is included and it does the job fine. If you’ve ever wanted to hear exploding lava and ice balls in full on atmospheric sound then look no further. The LFE shakes the room, the voices sound sublime and I always make a little game out of trying to guess who’s voicing what character. Bill Hader (as Leonard) wins it here. I find it odd that the movie sounds so good, though when I play the Angry Birds 2 game on my iPad I always have it on mute. That’s one of my many inconsistencies, I suppose. Regardless, the soundtrack will blow you away and with a new song every few minutes (ranging from David Bowie’s “Space Oddity” to Eric Carmen’s “All By Myself” to Bonnie Tyler’s “I Need a Hero”). Suffice it to say that there’s no shortage of catchy tunes.

While not as commercially successful as its predecessor, The Angry Birds Movie 2 managed to rake in nearly $150 million worldwide. As my wife says “I think you helped finance this sequel.” She may be right. It’s a good movie for the kids or us adults who have (sometimes) a little too much free time on their hands and love to fling birds from slingshots. And yes, that’s a thing. Or at least it is now. Sony’s disc doesn’t disappoint on the technical side of things, either. It looks and sounds amazing and has enough supplemental material to warrant a purchase. Recommended.