We all need an outlet for stress. Or whatever. I’ve got a few hobbies like working out at the gym, playing golf and of course doing this web site. But sometimes I just need to chill out. Most all of us have an iPad or at least and iPhone and luckily we’ve got smart and talented folks out there who design games for said devices. I don’t know what prompted me to download Angry Birds years ago, but I did and I enjoyed it. I was (and still am) pretty good at it, actually. Maybe I like seeing things fall down. Maybe I like to see birds blow up. I have no idea. I’m guessing that if they knew what attracted people to this addictive game, there’d be a lot more of them out there. Recently they came out with Angry Birds 2, a sequel to the original game. I actually prefer this version better, though they’ve clearly figured out how to get your money. So when The Angry Birds Movie was announced, I have to admit the kid in me (which takes up a lot more of me than you might think) I was excited to see it. I don’t really see movies in theaters nowadays, but when this showed up at my door I didn’t really waste a lot of time to pop it in the player. But another video game that’s been turned into a movie? Would it work? Could it work? Let’s find out.

On a remote tropical island live a community of flightless birds. One in particular, Red (voiced by Jason Sudeikis) isn’t too happy. He’s an outsider and lives near the beach, while the rest of the birds live in town. He’s got some anger issues and is sentenced to anger management by the judge (voiced by Keegan-Michael Key). There he meets two other birds: Chuck (voiced by Josh Gad) and Bomb (voiced by Danny McBride). Chuck is a motormouth who runs at light speed and Bomb tends to, well, blow up from time to time (literally). A wrench is thrown in the works of the birds when a mysterious ship carrying green pigs arrives. Their leader, Leonard (voiced by Bill Hader) promises friendship, but the birds start to wonder if something is awry when more pigs arrive. Before long, the pigs’ true nature is revealed and the birds’ eggs are stolen. It’s up to Red, Chuck and others to rescue them and save the day.

I jokingly ask my wife “why are the birds so angry?” when playing the game. Well if you really want to know the answer to that question, this movie provides a suitable explanation. And, for fans of the game, this movie is chock full of little easter eggs here and there. Though the main birds are featured, there are still some others that make an appearance in the film, notably the Mighty Eagle (voiced by Peter Dinklage) the once would be protector of the land who is now “retired” for lack of a better word.  Like most animated films, there’s plenty of entertainment for the kids, but there’s just enough “adult” humor in there to keep us occupied as well. I questioned a particular scene (containing a bird urinating) and the PG rating. Was I offended? No. But it just seemed out of place to me. Regardless, the movie is fun, not too long and if anything it should keep the little ones entertained. And if you’ve ever played the game, you’ll know that the pigs always somehow get away with their shenanigans so might we see a sequel? Who knows.

Are you kidding? How could The Angry Birds Movie not look like the epitome of perfection? It does. A new to Blu-ray animated film composed entirely in the digital domain will look amazing. It’ll make your HDTV come alive. It’ll sparkle. It won’t make you angry, that’s for sure! The movie flings itself onto Blu-ray looking just as we’d thought it would – perfect. These flightless birds live on a tropical island that bursts with color. Each of the main characters has its own personality, but more to the point – its own color. The texture of the birds, the backgrounds and even the rubbery sheen of the pigs all look amazing. Anyone who’s seen any Pixar movie or essentially any computer animated film will know what to expect. And this delivers. I’d mentioned in my Blu-ray review of this film that “…I don’t see how this could look any better in 4K…” Well I was wrong. The detail is just about the same, but what struck me were some of the colors. The gradients in the skies, some of the subtle textures in the ground and the overall spectrum of the image. Granted, it’s not a huge difference, but I had the Blu-ray in my other player and did an A/B comparison. There is a difference.

Also included is a Blu-ray 3D version. I’d noted to myself when watching the film that some of the scenes looked as if they had a “3D effect” and it should come as no surprise that wasn’t by coincidence. Watching this in 3D really is a treat, it makes you feel like you’re “in” the movie for a few scenes. I generally don’t like to watch 3D versions of movies because the color is a bit off and I don’t like wearing those glasses, but I have to give Sony credit here – this is a nice touch.

The Ultra HD/4K version of this movie takes the previously-released (and available on the Blu-ray) and adds a Dolby Atmos soundtrack to it. There are a few instances in which the Atmos track has an advantage, and rightfully so. By and large, the goals and surrounds are about the same, but if you view some scenes with one soundtrack and the Atmos on the other – you’ll notice a difference. Now I have heard better, but bear in mind this is a movie for the kids. We don’t want them scared of the birds, just enough sound to make it a more unique viewing experience. Vocals are rich and pure, Danny McBride does a fine job as “Bomb” while Jason Sudeikis’s “Red” leads the way with his sarcastic one-liners.  Surrounds are surprisingly active and the ending act where, well I won’t give it away, really makes the audio come to life. It’s a very ample and active mix and one that’s sure to please.

Generally speaking, when you have a choice to buy the Ultra HD or a Blu-ray, you should choose the Ultra HD just for future proofing. With this being a new movie, the choice should become even more clear as this not only adds a 4K version of the film, but you also get the Blu-ray AND a Blu-ray 3D version. Whereas if you wanted to save a few bucks and just go for the Blu-ray/DVD set, you’re missing out. Also the additional HD soundtracks as well as having the 4K version. It makes purchasing this version a no brainer. If you’re one of the millions of people who has download the app and have slung the birds at the pigs, then you’ll find a lot to like about this movie. No it won’t change your life, but as far as video game movies go – it’s really not that bad. I felt a few of the scenes were a little harsh for the PG rating, but that’s just me. 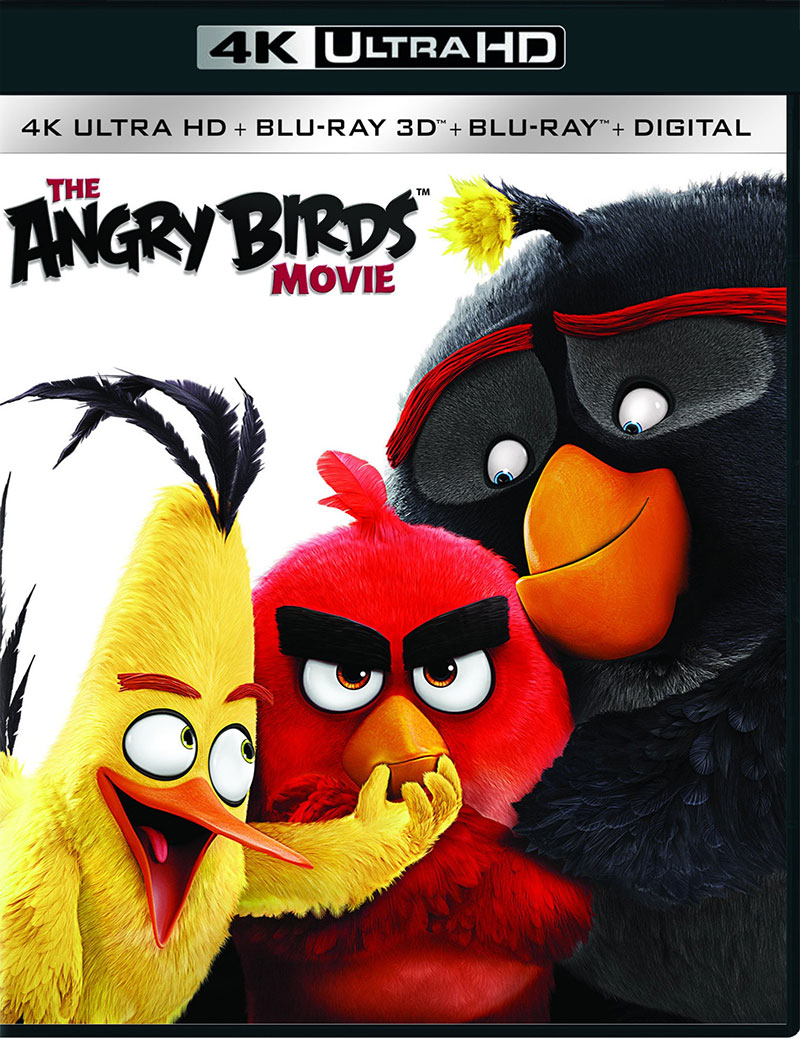