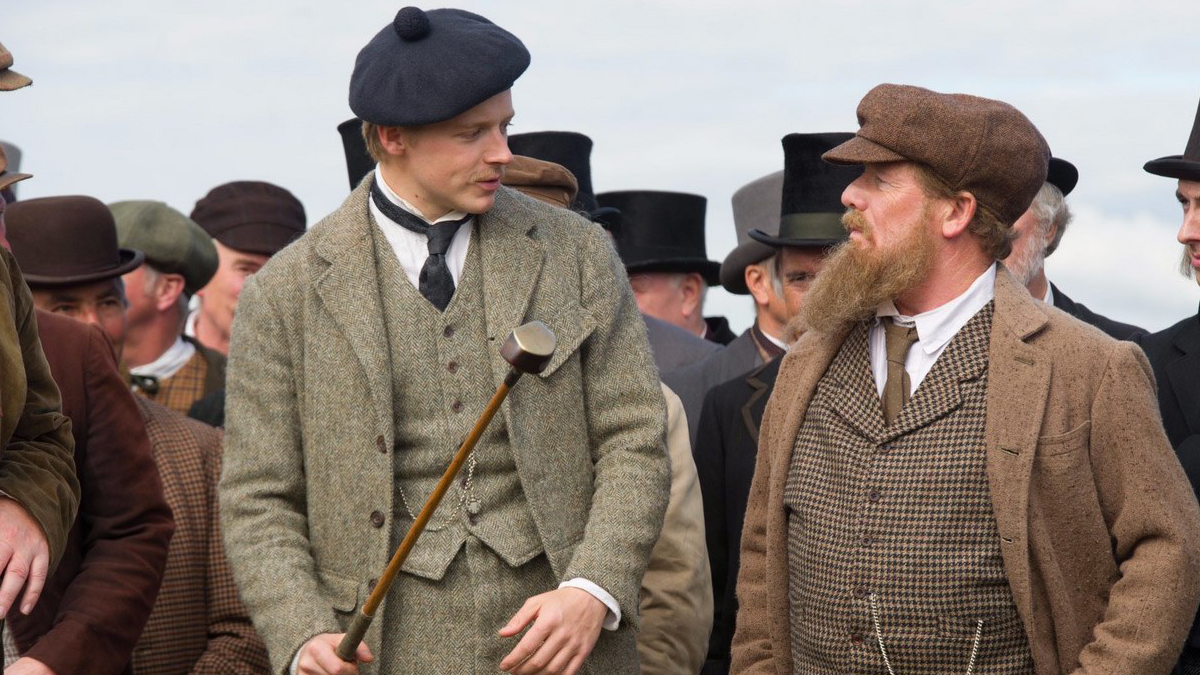 Movies about golf are, to put it in golfer’s terms, the equivalent of an albatross. The golfers reading this review will know what that is and for those that don’t, I shouldn’t need to connect too many dots. Sports movies in general are hit and miss and when you’re dealing with golf, no longer a “rich white man’s game” (thank you for that Tiger Woods), they’re even few and further between. Odds are that any movie about said sport will ultimately be compared to the holy trinity of films that include Caddyshack, Happy Gilmore and Tin Cup. I could be wrong, but I’ll go out on a limb and assume most anyone who loves the sport as much as I do will agree with me on those picks. And while you might know who Tom Morris is (depicted as a cartoonish character on some Golf Now ads), odds are you don’t know what he and his son did for the game of golf. And this is the story Tommy’s Honour tells – and tells it well.

Tommy Morris (Jack Lowden) has grown up near the links of storied St. Andrews in Scotland, where his father, Tom (Peter Mullan), serves as the greenkeeper — and the expert golfer. Tommy learns from the best, and when the story begins in the late 1860s, the 17-year-old golfing prodigy is ready to swing his way to legendary status. Though they’re by no means poor, they’re not among the town’s elite. After winning the British Open (the Open Championship as it’s now called) three times in a row, Tommy seeks to spread his wings. Tired of the rich men betting on him and giving him a portion of their winnings, Tommy decides that since they people are showing up to watch him play, he should get the lion’s share of the money. He also courts Meg (Ophelia Lovibond), a local woman with a rather scandalizing past (at least by 1860’s standards). And we see the story told through the eyes of the younger Tommy, who rebels against the class system — and his father’s wishes — to become a professional golfer, not just a commoner caddy.

One of the opening lines in the included featurette says “every professional athlete should tip their cap to Tommy Morris.” And they should. He’s widely regarded as the first “professional” athlete the world ever saw. His reluctance to strive for more and “buck the system” is what makes the story good and, better yet, the story is all true. Granted, fans of the game will get a lot more out of this movie than most, but it’s told with such precision and accuracy that even the casual fan might learn a thing or two. Directed by Jason Connery (yes, Sean’s son), there’s a clear passion for the project here. The courses are re-created with splendor and while the film may not keep you on the edge of your seat, it’s still a testament to the game and two of the men who changed the face of it.

I’m sure there’s a reason why, but it eludes me. Lionsgate must not have a lot of faith in this film since it’s only available on DVD. And it’s been a while since I sat down and popped a DVD into my Ultra HD/4K player. Still, as a fan and student of the game, I was excited nonetheless. The 1.85:1 anamorphic image is surprisingly clear and free of any imperfections. My player does upscale and as I admitted, I havne’t tried many other DVD’s in it. So either this is a really good-looking film or my player does a great job of upscaling (or both). That said, the movie was filmed in Scotland and it’s re-created with marksman like precision. The greens of St. Andrews and even the fields that comprise the other courses. Yes, the CGI on the golf balls was a little distracting (no way a ball is rolling like that through those fairways!). I noticed hardly any edge enhancement, good contrast persisted and I was very impressed overall.

Again, I’ve been spoiled by the DTS HD Master Audio and Dolby Atmos mixes on the newer titles, but Tommy’s Honour sports a rather low key Dolby Digital 5.1 mix. It has a few moments, probably the highlight is when a tree falls in the woods (and obviously it made a sound). Vocals are a bit hard to decipher since the Scottish accents are in full effect, but otherwise very robust and sharp.  Surrounds add a bit of atmosphere, namely wind on some of the golf-related scenes.  It’s nothing that will shake the room, but then again it wasn’t meant to be.

Ok, it’s not as enjoyable as the golf films I listed in the opening paragraph, but this is a historical drama that’s mean to entertain. I’d put it above many of the other golf-related films that purport themselves to be more than they should (The Greatest Game Ever Played, Bobby Jones: Stroke of Genius and The Legend of Bagger Vance). It’s a simple, straight-forward film that tells a story and does it well. It’s also family friendly, so if you’ve got a little one interested in the history of the game – look no further.