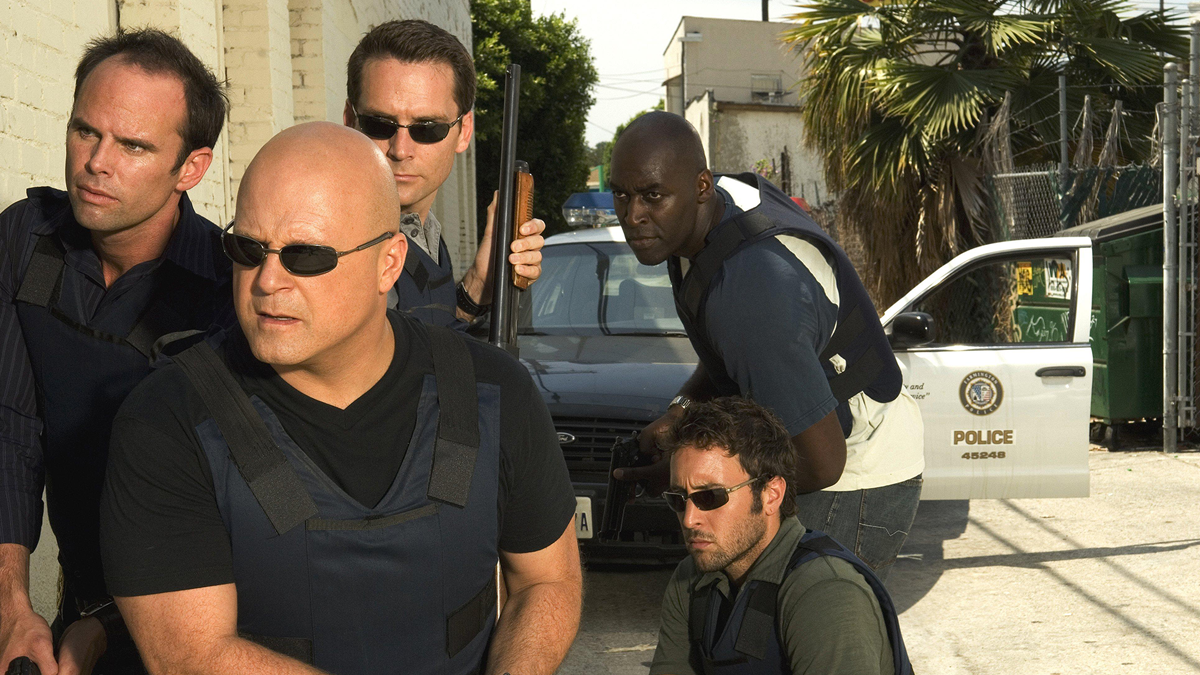 I can still remember the TV ads for The Shield back in 2002, which premiered on the FX network. I hadn’t seen anything quite like it on TV, and it focused on many scenes, but the one that stood out most was of the bald and tough Strike Team Captain, Vic Mackey (Michael Chiklis). He just has that presence that stays with you. The scene was an exchange between Vic and Police Captain David Aceveda (Benito Martinez). I’ll get more into it in a bit, but in a show filled with colorful and well written characters, Aceveda is the one true character who will really go head to head with Mackey. The tension between these two is compelling enough and they’re on the same team. The show ran for 7 seasons and ended its run in 2008. It’s held up remarkably well and many of the themes, such as racial tension and police corruption are as relevant today as they were back then. In fact, I’d say even more so today. FX had a number of good shows, including Rescue Me and Nip/Tuck, but this remains my favorite. It was known for pushing the envelope and is a game changer because of it. There’s so much the show has to offer that my review can only touch on so much of that. It truly needs to be scene, and whether you’re revisiting it or watching for the first time, this set is a must-own. The pilot episode remains as gripping now as when it first aired. I followed the first 3 seasons when they first aired, but somewhere around season 4 I had drifted away. This wasn’t for one particular reason or another, but I seem to recall just getting swamped for work and life in general. I made a point to play catch up with some of the later seasons, especially the final one to see where things would end. Nevertheless, it’s been great revisiting the entire series and to see how things unfold. The cast is superb and the story-lines gripping. Most who know me will know that I tend to gravitate more towards film than TV, but this is one on my small list of shows that I wholeheartedly recommend to just about anyone. It’s right up there with The Sopranos for me.

The first season contains 13 episodes that quickly bring us into this world. We have Vic Mackey (Chiklis) who is in charge of the strike team, along with Shane Vendrell (Walton Goggins), Lem Lemansky (Kenny Johnson) and Ronnie Gardocki (David Rees Snell). We see early on that Vic and his team do it their way and aren’t afraid to bend the law if it’s for the greater good. This causes lots of problems Captain Aceveda (Benito Martinez) as he realizes that he can’t control Vic. There’s a pivotal moment where Vic kills a new member, Terry that Aceveda put on the strike team to spy on Vic and his crew. This plot element will stay relevant for many seasons to come, and the consequences of Vic’s actions have consequences for all involved. The first season has many scenes between Vic and Aceveda that are full of tension as we’re unsure how they’ll play out. Aceveda still doesn’t hesitate to ask Vic for help when he can’t get a suspect to talk. Clearly Vic does things his own way. Shifting gears, we find Danny Sofer (Catherin Dent) and her trainee, Julien Lowe (Michael Jace) who has a lot to learn about how the police force works. Julien is a bit too by the books, and clearly has the rookie mentality. We then find Claudette Wyms (CCH Pounder) and her partnership with Dutch Wagenbach (Jay Karnes), a good detective to be sure, but something of a joke to many of his colleagues. We all have our favorite characters, but they’re all interesting and fully developed to where we don’t feel betrayed when the show follows their respective stories across each episode. Much time is devoted to Vic and his home life, including the revelation that his son has autism. The second season pushes the envelope further, maybe too far for some as it can rely on shock value sometimes. A scene where Vic burns a man’s face on a stove is still shocking all these years later. In reality, had the show not pushed things, it would’ve lost that edge that it had that in many ways put it ahead of its time. You really can’t censor tone, and it’s great that the show was able to get away with what it did get away with. Many of the exchanges between characters throughout the show are close-ups that really put us right in the middle of the tension. It grips you and doesn’t let go.

There’s a lot that happens in The Shield, too much in fact to talk about here and even some I don’t want to spoil. The basics are the strike team eventually learn of a money train that they intend to rob. This has serious repercussions that’ll lead into later seasons. Creator Shawn Ryan and the writers do a remarkable job of juggling multiple story arcs without the show ever getting too bogged down or complicated. I enjoy that there are both moments that simply show these characters and a day in their life, to heavier plot elements that progress the show further. We become invested in all of them early on that it’s hard to resist the show and its ways. Season 4 introduces us to characters played by Glenn Close and Anthony Anderson. Then season 5 Forest Whitaker shows up and the stakes are even higher. Looking back, if there’s a weak link, it’s season 4, but it’s still solid. It just isn’t as compelling as previous seasons or the ones that would follow. Season 5 rebounds rather quickly and hits the ground running. There’s a sense of impending doom that’s carried out across this season as the pressure on the strike team is closing in. From the first episode to the shocking finale, this season is a true gem. It made (at the time it aired) the anticipation for season 6 all the more painful to see where things would go from there. One thing that’s clear is that the show isn’t afraid to take risks. Predictability isn’t something you’ll accuse the show of being.  Each episode begins with a nice, short recap of what’s happened in previous episodes, getting us up to speed.

Seasons 1, 2, 4 and 7 contain 13 episodes with season 3 being the longest with 15. Season 6 is the shortest with 10 episodes and season 5 contains 11. The episodes are all labeled with a brief description on the main menu of each disc and on the inner sleeve. It might be best to not read too much to avoid possible spoilers if you haven’t seen the show yet.

The episodes on each disc are presented in 1.78:1 Anamorphic Widescreen which more closely resembles the show when it aired on TV. They look just fine, but obviously lack the heightened depth and clarity that you’ll get from the HD set. The way I see it, if you’re going to shell out your hard-earned money for this entire series then you’re better off going with the Blu-Ray set.

The audio here is presented in Dolby Digital 5.1, which is still quite effective, though the DTS HD track from the Blu-Ray set was much sharper and more effective. Vocals are fine, and the rear channels kick in when needed, but I preferred the DTS tracks.

Mill Creek has done a wonderful job with the packaging here. There’s an outer case which has the inner case holding the discs. This set includes 18 discs, with the last 2 devoted to special features. There are other features included on the previous discs, such as deleted scenes and audio commentaries, which will all be detailed below. The outer case folds out and has a cover that has an invisible magnet to keep it securely closed. The discs are safely slipped into respective sleeves with each flap detailing the episodes found on that particular disc. There’s also a paper intro from series creator Shawn Ryan as you open the discs. It’s attached to the main case which houses the discs. Also rather clever is the face of the case which houses this discs has a badge on the front.

It’s great that Millcreek is offering fans the chance to get this on DVD at a more affordable price than the Blu-ray set, but if you’re honestly going to pick up this entire series, then you’re better off going for the best option. The packaging is also much nicer in the Blu-Ray set. Like, the BD set, this is also 18 discs and repeats every episode and the same features, but the packaging is noticeably inferior to that. You don’t get a fold out style case and the discs are housed in sleeves, holding 2 total, with one on the front side and one on the back. There’s also a booklet included inside which gives episode descriptions for each season.