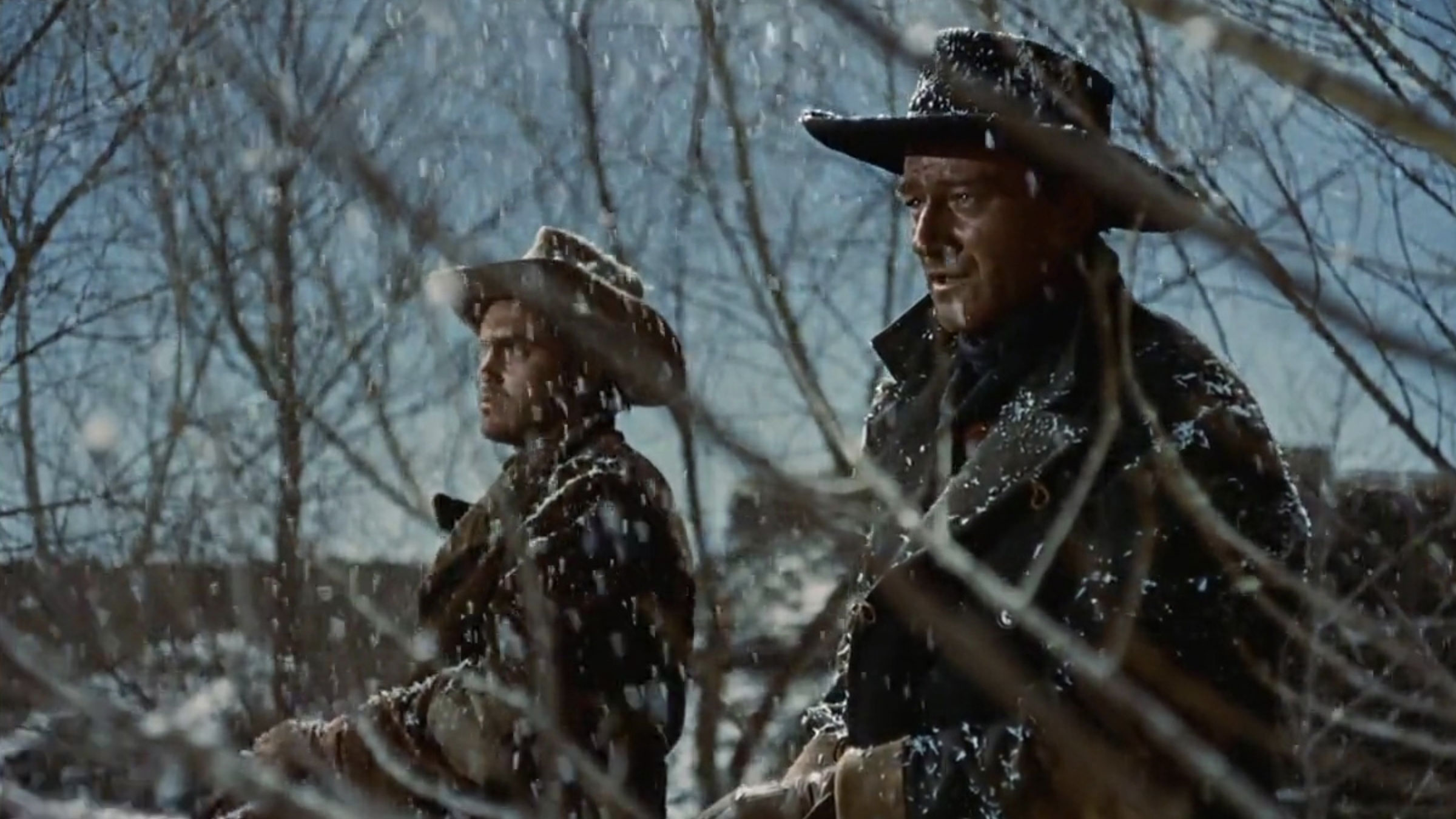 Ethan Edwards (John Wayne) has returned home to his brother’s ranch, but the toll taken on him has not been small. He fought for the Confederate forces and did so with pride and true belief, not because he had to take up arms. Even with the conflict over, he harbors hatred for the Northern people, but he also hates anyone who isn’t white like he is. This is even true after he saves the life of a child, as when he discovers the child has Cherokee blood, he refuses to accept it, even as it is adopted into his family. He has become a bitter man and his actions after the war are unknown, but suspect. So now he is worse than ever, unable to accept the love and affection of his own family, not even his wife can comfort him now. While at the ranch, a band of Comanche attack and kill those at home, but also taking the two young daughters prisoner. Now Ethan and his brother lead a rescue team to search for the girls, but the search is more extensive than they imagined. As days turn to weeks, weeks to months and months to years, almost everyone abandons hope. But Ethan pushes on and by his side is Martin, the only ones left to continue the search. Ethan eventually learns that one girl has survived, but he plans to kill her if she is found, as she is no longer part of the white world. Martin remains at his side, but knows he must protect the girl from Ethan if she is found. So the two work together in the search, but when the time comes to take action, what will become of Ethan and Martin’s shaky bond?

The Searchers may or may not be the greatest western ever produced, but it is one of the best and that much isn’t debatable. The movie didn’t spark much praise when it was first released, but time has been kind to this one, as it is now revered as a classic. John Ford directed a number of great films in his career, but this was his apex, his masterpiece. So of course, it is natural to find his frequent star John Wayne present. While I think Stagecoach (another Ford picture) has Wayne’s best performance, he is excellent here as well. He is allowed to show off his darker side and it works wonders, showing that he could be more than a one dimensional performer. This isn’t the kind of role he is remembered for, but to be, it is one of his finest efforts, as he works outside his typical range and succeeds. The rest of the cast is also quite good, with Vera Miles and Ward Bond as standouts, but even the small roles are well played here. The film is not the kind we’re used to with Wayne in the lead, not the straight forward “settlers vs. Indians” storylines, but that is good, I think. Ford and Wayne spent so much time working the cowboy tale in one style, to see them switch up really makes The Searchers stand above the crowd. This is an excellent movie with excellent performances and of course, Ford’s direction is just shining here. Warner’s new Special Edition boasts a new restored transfer and a host of supplements, not to mention some cool in box trinkets, so this release is well recommended.

The Searchers is presented in 1.78:1 anamorphic widescreens. This movie has been shined up thanks to a restoration that has worked wonders. The print looks very good, with no real errors to mention, so those beautiful desert scenes really sparkle this time around. The lack of grain and debris allows the image to be deep and show a lot of detail also. So we have a crisp, clear picture that captures the magic of Monument Valley in grand form, just terrific work. I was pleased with the colors also, as hues are vivid and bold, but never suffer from errors, so the colors retain their natural, bright presence. I do think a few scenes come off as too dark, but other than that, contrast is on the mark. A few minor issues do surface, but this is still a wonderful restoration and for fans, a real treat to see the film in such good condition.

A pretty standard mono track, which seems to be decent enough, although a few sequences would sound great in a full surround track. The music sounds pretty clean and shows minimal age related issues, while the sound effects are good, but too limited by the mono format. Still, no real problems surface, it just seems like some of this material is being held back, which is a let down. The dialogue is great though, crisp vocals and no traces of volume problems, terrific work here. This release also includes subtitles in English, Spanish, and French.

The audio commentary here is with filmmaker Peter Bogdanovich, who never ceases to amaze with his vast knowledge of film. He is a brisk listen, as he packs in ample information, but also entertains, so you’re never bored with his sessions. This one proves to be no exception. A trio of featurettes is next, each of which run about half an hour, give or take a few minutes. The first is a discussion between various filmmakers about The Searchers, the second is a behind the scenes piece on the shoot, and finally we have a vintage featurette on the production. Not in depth stuff here per se, but all are welcome and substantial inclusions. This release also features an introduction from John Wayne’s son, as well as the film’s theatrical trailer. In addition to the on disc supplements, the case houses reproductions of The Searchers comic book, studio correspondence, memos, the complete press book, and even photographs. These really help the release feel special, as not many DVDs come with this kind of cool stuff. Kudos to Warner.