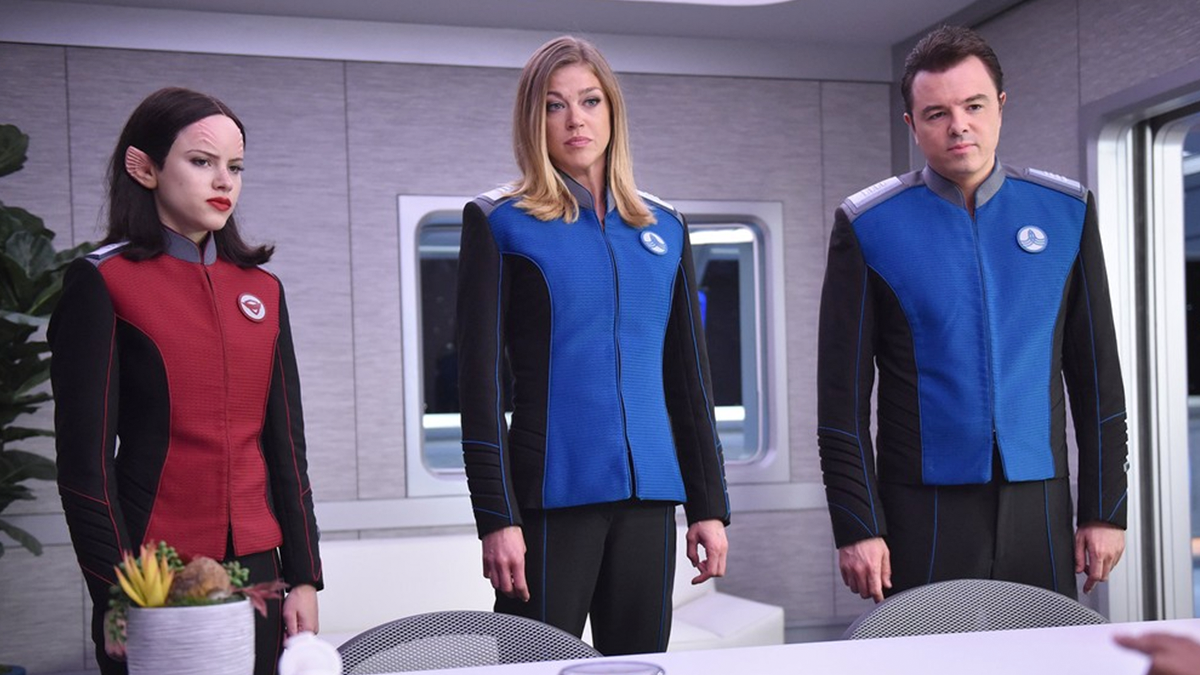 “We need no longer fear the banana.”

Star Trek: The Next Generation ranks as one of my all-time favorite television shows. But the series had its run and ended in 1994. There were a few feature films that followed, four to be exact, but even those fizzled out with the last one, Nemesis, in 2002. The last Star Trek series, Enterprise, ended its run in 2005. What’s that mean? Well, it’s been nearly a decade and a half with no Star Trek on television and the best we could do were the reboots starring Chris Pine and Zachary Quinto. Clearly there was a need, nay, a demand for something Trek-like on the small screen. And in 2017 audiences were rewarded – twice. Family Guy creator Seth MacFarlane, a long-time fan of Star Trek: TNG, debuted The Orville, a not so subtle nod to the aforementioned show. But wait, we were also treated to a “real” Star Trek series, Discovery. The only caveat was that it was only available via the on demand app from CBS. Is too much of a good thing, bad?

Those familiar with the aforementioned shows will feel right at home with The Orville. As I described it in an online forum “…it’s just like Star Trek: The Next Generation with just the right amount of the word “dick” thrown in for good measure.” And I stand by that assessment. Anyone looking for parallels between the two shows won’t be disappointed (or will have to look very hard). Even the casting choices, most of which are brilliant, echo some of their TNG counterparts. But the show got off to a slow start with pacing issues, odd stories and some disjointed scenes that left even me scratching my head.

And for those that are totally new to the show, the premise is this: Capt. Ed Mercer (Seth MacFarlane) has caught his wife, Cmdr. Kelly Grayson (Adrianne Palicki) in bed with another man. Determined to prove his worth and start a new chapter, he’s assigned a mid-size ship in the Planetary Union. The only catch is that his first office is none other than Kelly. He assembles a qualified, yet eccentric, crew including his best friend, Gordon (Scott Grimes), who has problems with authority but is the best helmsman in the fleet; Dr. Claire Finn (Penny Johnson Jerald); Bortus (Peter Macon), an alien from a single-sex species; Isaac (Mark Jackson), an artificial life-form from a machine society; navigator John Lamarr (J. Lee); Alara Kitan (Halston Sage), a young, inexperienced security officer; and Yaphit (voiced by Norm McDonald), a gelatinous creature.

Ok, now here’s something that doesn’t make sense to me. And I realize that Fox has stated that it would not release television series in Blu-ray (I think X-Files was the last one). You’ve got a television show set in outer space. As of this writing, it’s nearing the end of 2018. Buzzwords like “HD” and “4K” perpetuate nearly every advertisement when it comes to technology. And yet here we have a new show that’s being released on DVD. I mentioned, in my recent review of Family Guy: Season 16, that with animation there really wasn’t much of a difference when it came to over the air 1080p and DVD quality. Well, The Orville isn’t animated.

This is a show that I watch regularly and it’s broadcast in HD. Therefore when watching this series on DVD you’re taking a step back in terms of video quality. Yep, we’re losing several hundred lines of resolution and it shows – literally! Even the menus look a bit blurry and jagged. This isn’t unwatchable by any stretch, but when the show is so readily available On Demand or via streaming services in superior quality, there’s not much aside from the supplemental material that’s going to make the average fan pick up a copy.

But so I can say I said it, the 1.78:1 anamorphic image is indeed enhanced for widescreen televisions. The uniforms of the crew are bright, bold and colorful. The show has several special and practical effects which look better in 1080p as opposed to DVD, but it’s not entirely bad. I’m just going to stop right here. Anyone who’s seen the show will notice an immediate degradation of video quality. I would hope that this is one instance in which Fox would opt for a Blu-ray. Fans would appreciate it.

The audio is a standard Dolby Digital 5.1 mix and in the days of Dolby Atmos and DTS X, there’s a pretty noticeable difference between the two soundtracks. But having said that, this isn’t all bad. The show uses some sparing surround sound, vocals seem rich and pure and it’s a fairly good representation of how the over the air broadcast sounds. This isn’t anything special, but again the inclusion of a DTS HD Master Audio mix on a Blu-ray would bring it to another level.

I’m fortunate in that I get about 99% of all my DVD’s, Blu-ray’s and 4K discs for free by the studios. But for those out there that have to put their hard-earned money down to buy a set, this one’s for you.  The only thing that might warrant a purchase of a DVD set are the supplements, so with that said – let’s take a look.

My comments on the DVD set withstanding, I do like and enjoy the show. It’s one of the few I watch on a regular basis. But the ultimate problem remains that this is a comedic take on a space exploration show. This has been done before with Star Trek and, more to the point, Star Trek: The Next Generation. The Orville manages to tell interesting stories using the future as a metaphor for the present and when the show finds more of its own voice (which happened with the last few episodes), only then will its potential be fully realized.