The League: The Complete Season Three

A long, grueling season of professional football leads to one important event, the Shiva Bowl. A group of obsessed friends has battled over the Shiva for years, a fantasy football tradition that often consumes their lives. Kevin and his wife Jenny guide separate teams, while also trying to keep romance alive and their child under control, while douche bag Ruxin takes pleasure in being a sadistic lawyer who exploits every loophole possible. Andre is a plastic surgeon with a successful practice, but he finds himself mocked more than celebrated within the group. Pete is divorced, but he chases women as much as possible, while also balancing his time to ensure he remains toward the top of the league. Finally we have Taco, a drug addled slacker who doesn’t even know his players’ names, but is always good for random adventures. As yet another season of the league kicks off, the group once again goes head to head, but who will come up with the Shiva this season?

The League might not be an instant classic, but it never fails to entertain if you can handle some risque content. This release also includes extended episodes, which ramp up the naughty segments. So you’ll see naked women and hear more profanity than during broadcast, which lets the show really push the limits at times. The mean spirited nature of the characters is certain to turn some viewers away, but I think the interactions are hilarious. You can tell there is a strong bond within the group, so the sadistic banter is not as brutal as it could be. The cast is well suited for their roles, which really ensures the dialogue hits home. The group is able to play off each other well, with superb timing and reactions. The larger story arcs in this season aren’t as good as previous seasons, but the smaller stories are a blast. Each character is given is ample time to shine and of course, Rafi is back and he is without a doubt the shining star, stealing scenes left and right. So if you like raunchy, hilarious shows, The League is worth a look and this third season is more than solid.

The episodes are presented in 1.78:1 anamorphic widescreen. The show looks great here, though as always, DVD simply can’t compete with the HD versions. But if DVD is your format, you couldn’t ask for a much better treatment than this. The image is sharp and clean throughout the entire season, with no real issues to mention. The colors look bright and natural, while I found contrast to be stark and accurate at all times. Just a great looking treatment across the board.

The sound design here isn’t that explosive, but the Dolby Digital 5.1 option sounds good. The music add some kick, as do infrequent bursts of power, but overall the dialogue dominates the audio. That is fine however, since the vocals provide the bulk of the laughs and you want those lines to be crystal clear. The dialogue is clear and clean, with no harshness or volume issues to contend with at all. This release also includes subtitles in English, Spanish, and French.

In addition to the extended episodes, you’ll also find deleted scenes, a gag reel, and a couple of behind the scenes featurettes. 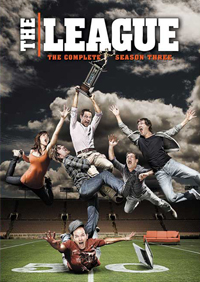