In 2149, mankind is on the brink of extinction and the world is plagued with environmental disasters. The air is black, population control is in place, and plant and animal life is vanishing. In this state of desperation, scientists have found a unique path that could lead to hope for a real future. A fracture in time has been discovered, a portal of sorts that can be used to send expeditions deep into the past. Nine groups have been sent into the past, over eighty million years into the past, to a place that is known as Terra Nova. Jim Shannon has learned that his wife and children have been selected for the tenth expedition, but he is in prison for violating the population limit and only two children will be allowed into Terra Nova. He soon begins to plot how he can keep his family together and start a fresh life in Terra Nova. But can the Shannon family manage to find a way to remain together and once there, will Terra Nova be the paradise they expect?

This ambitious series was cut down after only thirteen episodes, but is Terra Nova worth a visit? The show has a great premise, as mankind tries to start over after a horrific future, but the family friendly approach hurts the content. The exotic locale is loaded with predators, both man and dinosaur, but the danger never feels visceral. This is because Terra Nova has to keep a safe shell in place to ensure the series is appropriate for all ages. I’m not saying the show needed rampant blood and gore, but some brutal moments would have done a lot to cement the dangerous forces at work. Even so, the show has some good moments and the potential of the premise is sometimes tapped to good ends. I can see why the show wasn’t a smash success, but I do think it deserved a chance for at least a second season. This release also included a code to an on-line motion comic that let you experience how the story ended, since the series was cut at such an abrupt point. So if you’re a fan of Tv on DVD or just plain love dinosaurs, Terra Nova: The Complete Series is worth a spin.

The episodes are presented in 1.78:1 anamorphic widescreen. The episodes look terrific here, though of course not up to HD levels, but that is a given. The visuals are clear and clean, so all the dinosaur action is well replicated. The lush greens and deep browns of the environment look great, while contrast is smooth and consistent. Not much else to report here, the show looks great and minimal issues arise.

The Dolby Digital 5.1 soundtrack is quite good, with a solid amount of power and presence. When the dinosaurs are present, the surrounds ensure their roars and thundering movements come through as intended. The series also has a number of action driven scenes, which also put the surrounds to good use. When things are calmer, presence remains solid thanks to the music and background elements. The dialogue is also clear and always audible, so no vocals are lost in the mix. This release also includes a French language option, as well as subtitles in English and Spanish.

This release includes some deleted scenes, an extended episode, director’s diaries, audio commentary on the Occupation/Resistance episode, a gag reel, and a handful of behind the scenes featurettes. 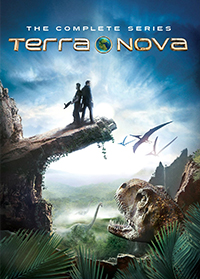