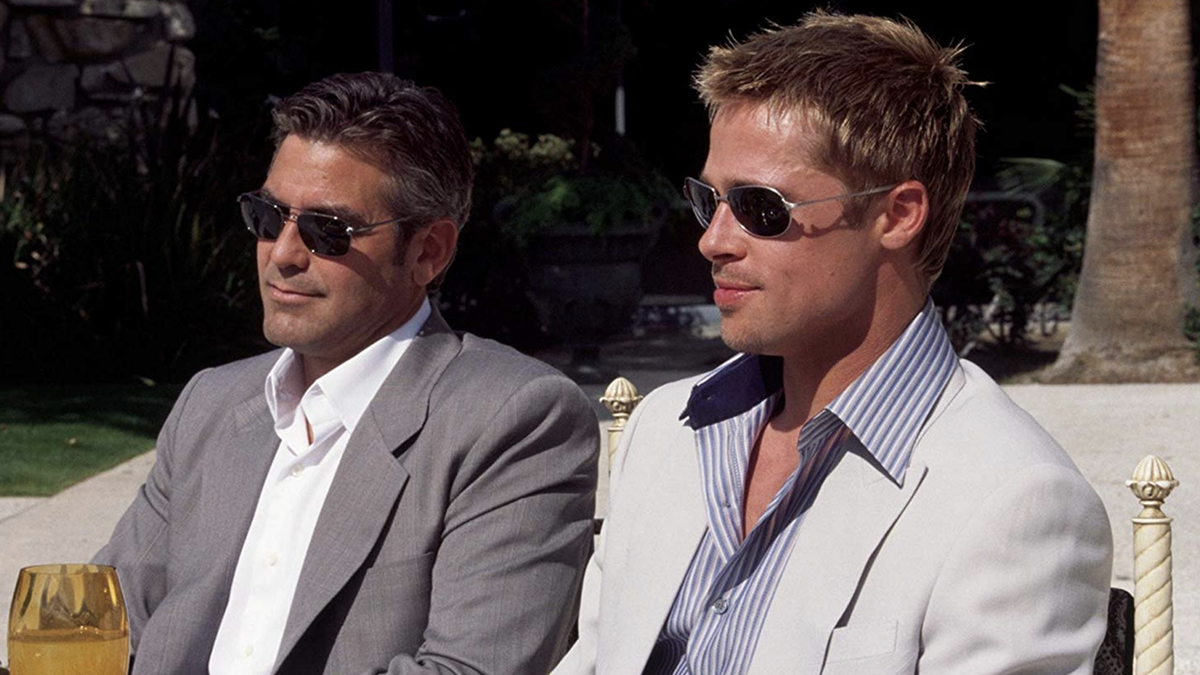 George Clooney, Brad Pitt, Julia Roberts, Andy Garcia, Matt Damon…never heard of ’em. Only kidding, of course! Director Stephen Soderbergh has assembled one of the best “A” list casts of the last decade and audiences liked what they saw. As most everyone knows, this is a remake of the classic “Rat Pack” movie that was one of their many. It did well, but is almost nothing compared to the newer version. Soderbergh wanted it that way, too. He said that “those guys were the embodiment of cool and I wanted to try to distance myself from that and make my own movie”. True enough, but the essential storyline is the same. But back to the cast for a minute. Soderbergh has worked previously with Roberts (on Erin Brockovich), Clooney and Cheadle (on Out of Sight) just to name a few, but when you have this much star power attached, many of the others did it just for the experience; and many of the stars took a drastic pay “cut” just to be in the movie (which was still budgeted at $90 million and more than made that back in profits). So you have an ultra-hip cast (not quite as hip as the original, mind you), a director who’s on like a 6 movie winning streak including a Best Director Oscar for Traffic , and a remake of a heist movie. Are you in or are you out?

The storyline is essentially very easy to follow. After just getting released from prison, Daniel Ocean (George Clooney) contacts some of his old buddies to knock over three Las Vegas casinos (evidently, jail didn’t rehabilitate him). Now these aren’t just three random casinos, they’re all owned and operated by Terry Benedict (Andy Garcia) who is more than a ruthless businessman; he’s also seeing Ocean’s ex-wife, Tess (Julia Roberts). Now a bit on Ms. Roberts for a minute…I find her increasingly more and more annoying, she’s everywhere, she’s won an Oscar and so on, but this is a total “guy” movie and though she’s not in it enough to actually ruin it, I still find her presence here a bit on the annoying side. She’s a great actress, but something about her just bugs me. Anyway, enough of my rant and back to the story. Ocean and close friend, Dusty Ryan (Brad Pitt) go about gathering the group of folks both talented and crazy enough to try and pull this caper off (and on a side note, notice in how many scenes that Pitt is eating something). However if they do, then the jackpot will be around $150 million dollars collectively. That’s a hard offer to refuse. So as they recruit the members, which range from the Malloy Brothers (Turk and Virgil played by Scott Caan and Casey Affleck respectively) to a small-time thief by the name of Linus (Matt Damon), the crew has it’s foundation and now the fun starts to begin!

Now I have to admit that most of this movie is about the planning and preparation for the actual robbery. But again, that’s where the fun is. I won’t tell how it all happens or ends up, but let’s just say that everyone has their own job and if they don’t pull it off, the whole thing will go bust and they’ll all end up in jail. While the side story of Daniel and Tess (he’s trying to win her back) tends to take away from the action, it’s so exciting to see movies like this. We were subjected to movies like this a few times last year with The Score and Heist and it seems that Stephen Soderbergh was able to pull off what David Mamet and Frank Oz weren’t…make a successful/entertaining heist movie. There are several reasons why to see this movie, for one the cast. It’s a work of art to see all of these huge stars making a movie and it looks like they all had a blast doing it. The story, it’s intriguing and fun to watch. Heck, it makes me want to knock over a casino right now! The execution, a result of the director and the cast. This was one of my most enjoyable experiences from all of the movie-watching I did last year (and I saw a LOT) and quite frankly this DVD deserves to be on your shelf, and if you’re not too sure about it, give it a rental and see what you’re missing. Highly recommended.

Warner has decided to present this in two different formats, one a widescreen version and a completely different version which contains the full-frame version but the supplements are exactly the same. Well, since they sent us both for review, I’ll cover each one. First, the widescreen version. Soderbergh, to my knowledge, has never filmed a movie in the wider aspect ratio of 2.35:1, this is. So while it might not look like one of his films, it does play out like one. A majority of the scenes are inside hotel rooms and casinos as one might expect for a movie taking place in Vegas (how many times can we see the strip). But the glitz and glamour of Vegas has never looked better than it does here. The black levels are right on track and no edge enhancement was noticeable. There was a bit of a problem with consistency, as some scenes tended to have a bit of artifacting (the darker scenes), while some were like looking in a mirror. Still, it didn’t detract from the action on screen, but for a movie this new, I was a bit surprised. Flesh tones seemed natural and for the most part, there was really nothing wrong with the transfer except for those few minor errors.

Now, it’s not often that I review a movie in full-frame, especially newer ones, but there is a market for those “full-framers” out there and for your benefit, here you go. Obviously, the full-frame version will not have the added benefit of the anamorphic enhancement that the widescreen version does. Still, the image is sharp and clear, but it does suffer the same problems that the it’s widescreen counterpart does. And if you ever need a reason to see what you’re really missing when watching the widescreen version vs. the full-frame version, take a look at this movie. Entire characters are cut off and the panning and scanning is something that I a haven’t had to deal with in a long time. Still, my set is rectangular and there’s plenty more whose are square. So if you hate those little black bars, then you might want to go with this version. Either way you go, you’ll be getting a great picture (in many senses of the word).

Though Soderbergh’s movies are more known for their content and not their sound, Ocean’s Eleven does contain a fairly decent Dolby Digital 5.1 track. A lot of the LFE sounds are very prominent throughout and as much action is devoted to the music and scenery, this really is a dialogue-driven movie. The surround effects are used rarely, but when they are in action you can tell they are. So while this may not be as in your face as some of the soundtracks out there, this one gets the job done but without a lot of the frills. The action takes place on the front three speakers for the most part and dialogue is crystal clear. All in all, it’s not reference-quality, but it shouldn’t disappoint either.

Warner has done a nice job with their disc here and they’re giving fans more of what they think they will want…star power! Though it doesn’t feature that much supplemental information, the two audio commentaries are very interesting. The first is with Soderbergh and Ted Griffin (screenwriter) who obviously have a lot of knowledge about the film. As with most of his tracks, Soderbergh is very entertaining and talks almost all the way through; and another great thing about him is that he has done a commentary track for nearly every movie that he’s directed. Thank you! But casual viewers of the film might switch to the second track featuring Andy Garcia, Brad Pitt and Matt Damon. Naturally these three aren’t that adept at doing these tracks (I think Pitt has the most under his belt with three), but it’s nice to see (hear, rather) these huge stars commenting on the movie and have just as good of a time doing it as they did in the movie. One thing that really aroused my curiosity was the fact that in the end credits, Julia Roberts was listed as “And Introducing Julia Roberts as Tess”. I found it odd that they listed her like that and it was obviously a joke, but in neither commentary was it commented on. Ah well…

This leaves us with two featurettes. The first is an “HBO First Look: The Making of Ocean’s Eleven”. This is something we’ve all seen before and quite frankly it’s more of the same. Interviews with the stars and director and some background information on the movie, why they did it, etc. It’s a nice feature, but one we’ve all become accustomed to. A bit more interesting is “The Look of the Con” which concentrates on the different outfits and “costumes” of the different members of the cast. From Brad Pitt’s sleek and snazzy look to George Clooney’s more earthy tones, this really shows how much the clothes they wear can influence their character (and no, none of us would look as good as they do in the same clothes). A few theatrical trailers are included as are some limited cast and crew bios. Lastly, some DVD-ROM content is shown with links to the original website and an interactive game “In or Out”. Warner has certainly done a fine job with this disc, so no matter which version you choose (Full Frame or Widescreen) you’ll walk out a winner.