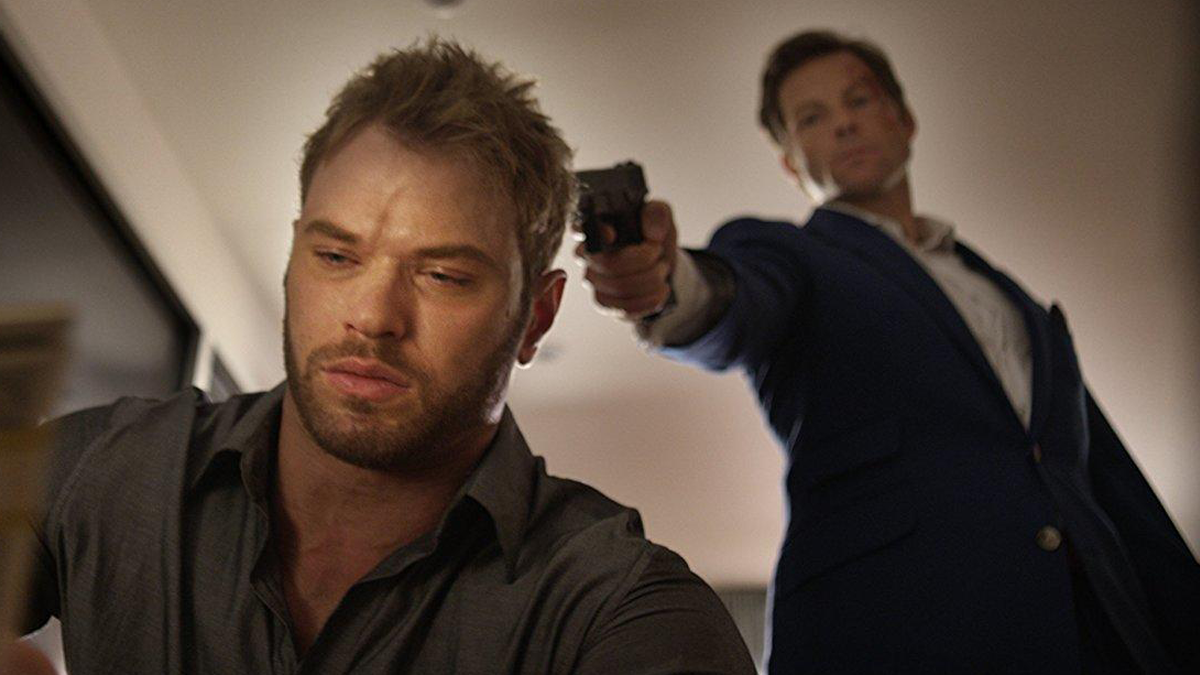 It’s always nice to discover a film that bypassed a large theatrical release, but is perfectly entertaining on the small screen. Make no mistake,Money isn’t some hidden gem waiting to be seen, but it mostly entertains during its brief running time. Actually, thinking back over it, with a more recognizable cast and a tighter script, this might’ve been an even better film and gotten a wider release. It involves a small group of characters confined to a single setting and it’s mostly successful in its execution.

Two wealthy businessman are having a dinner with their wife and girlfriend. They’ve both gotten away with stealing $5 million. That is until an uninvited houseguest shows up and demand they return it. We have Mark (Kellan Lutz) who is married to Sylvia (Jess Weiler). They’re having over their friends, Sean (Jesse Williams) and Christina (Lucia Guerrero). Sean is Mark’s co-worker who is part of the ill-gotten money they stole. All seems to be going well until a strange man named John (Jaime Bamber) shows up. He claims he’s new to the area and renting a house nearby. He’s sharped dressed and seems legit enough that Sylvia brings him to the back where the others are outside chatting. It doesn’t take long for John to then tell them why he’s really there. He’s aware of the money that’s been stolen, and makes it simple for the two men to simply return it then he’ll leave. Of course, they deny knowing anything about the money at first, but quickly learn that John is messing around. He has a gun and uses that to get what he wants. For the most part, the film focuses primarily on these film characters with an earlier character introduced that may or may not show up again later. There are a few plot twists and turns throughout this brisk film, but to spoil them would spoil the fun. It kept me reasonably engaged.

I had never heard of this film before being asked to review it, but I’m glad I didn’t pass up the chance. While not without some flaws, the film is still mostly effective at keeping our interest. I was never quite sure how things would play out. The characters are developed enough to make us care and the plot is simple enough where we can stay invested. It’s well worth checking out.

While not the most visually appealing film, the transfer does it justice. As mentioned, we’re confined to mostly a single setting, but it comes across nice and with strong details. Flesh tones are smooth and well rendered and details are strong throughout. Fans will be pleased.

Since this is a dialogue heavy film, don’t expect too robust of a track, but the vocals are clear and strong. There’s some action here and there and that’s when the rears kick in more, but mostly this is a front loaded track, but it’s fine for that.

With a better, more popular cast and a tighter script, this would’ve been a bit more effective, but it’s still perfectly entertaining. It’s a film with a simple plot and a single setting with 5 characters. It makes the most of its premise and comes recommended. Rent it.