Peter Kingdom (Stephen Fry) is a respected country solicitor, the kind of lawyer who stands up for the little guy and is more concerned with justice than profits. His law office is a small one, but he provides excellent service to the Norfolk area, with the help of his trusted associates. He is joined at the office by his apprentice Lyle (Karl Davies) and secretary Gloria (Celia Imrie), while his home life is populated with colorful family members. His sister Beatrice (Hermione Norris) lives him after a stint in rehab, so she brings a vibrant presence to his life, to say the least. In between cases and his hectic private life, Kingdom searches for the truth about his brother Simon, who disappeared under mysterious circumstances. So he always quite a full load of tasks to manage, but can Kingdom juggle all these things and keep enough focus to make sure justice prevails?

This is a rock solid series that had a short run of three seasons, but Kingdom never failed to entertain. This first season introduces us to the countryside locale and unique characters, but never feels overly expositional. We’re kind of let inside the show’s world, then we pick up what is what as the stories unfold. This is a great approach as the season offers only six episodes, so lengthy exposition would have left little room for the cases themselves. Even with only six episodes, this season packs in a lot of naturally unfolded backstory, character development, and good stories from the legal cases. The show’s pace is slower than some American shows of this kind, but it is never dull and the memorable characters ensure your attention remains on the show. Stephen Fry is a massive talent and he brings all of his skill to the title role, so the show really benefits from his presence. The supporting cast is terrific as well, bringing the unusual cast of characters to life in fine form. So if you like legal television shows or British television in general, Kingdom: Season One is well worth a look.

The episodes are presented in 1.78:1 anamorphic widescreen. The show looks terrific in this presentation. The visuals are clean, with a bright and well detailed presence. While this isn’t going to compete with an HD version, the visuals show good depth and fine detail looks passable. I found colors to be bright and as I remembered from broadcast, while contrast is great, even in the darkest of scenes.

The soundtrack is basic and unremarkable. The series doesn’t need explosive audio, but I would have liked a more responsive surround mix here. The music sounds good, but doesn’t envelop the speakers like it could, while sound effects are fine, though not memorable. The dialogue sounds good, with crisp vocals and no errors I could find. Not a bombastic sound design, but the show sounds quite good. This release also includes English subtitles.

This release includes no bonus materials. 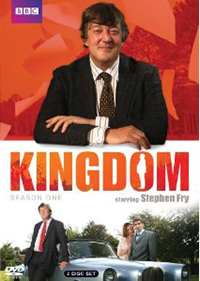