You know, I think I’ve found more “hidden gems” while channel surfing in the past few years than in the last ten years combined.  What?  I guess what I mean is that there is so much television programming on these days, it’s nearly impossible to keep track of what’s on and what’s not unless you do a little exploring.  Case in point, a few years ago my wife and I were trying to decide what to watch when we stumbled across a little show named Impractical Jokers. Now the name alone might be enough to deter someone or lure them in (I guess it depends on the person), but suffice it to say that after a few minutes we were hooked and laughing uncontrollably. This might also beg the question: what’s the show about?  Well, let me tell you…the show follows four “life long friends”, but in this case it’s actually true.  Q, Sal, Joe and James “Murr” Murray grew up together and are members of a comedy quartet known as “The Tenderloins.” This show is essentially a way for them to flex their comedic muscles.  Each show is divided into a number of tasks and each one of the members must complete that task, else they fail to gain a point.  The person (or persons) with the least number of points at the end of the episode loses and must complete a more grievous task much to the delight of the others.  The catch is that the person doing the task has to be told what to do by the others.  This complicates matters (for the person, to us it’s just hilarious).

The fourth season featured 26 new episodes (down from the previous two seasons) and, as we might expect, the jokes are bigger, badder and of course feature  bit more risk. This is hell to the jokers, but funny as hell for the viewer to watch. Assuming you’ve seen the first three seasons, and if you haven’t – watch it, we find our wandering heroes once again in the heart of New York City and venturing out to New Jersey shopping malls. As is the case with every viewer, you’ll have your own personal favorite. And that’s why the show works so well, like it did on Seinfeld, as you’ll undoubtedly see something in each one of these guys you can relate to.  As of this writing the show has been renewed for a fourth season along with a six episode spin-off, Jokers Wild! No telling what that will entail. My only fear, and this is something that was actually brought up in an episode, is that the show will become too popular and people will recognize the guys thereby ruining the gags. But in New York City, I’m guessing no matter how popular something is – there’ll be plenty of unsuspecting folks.

Each of the episodes are presented in a 1.78:1 anamorphic image that looks just a shade “worse” than it does over the air. The show airs on TruTV and is shown in full HD, so these DVD’s don’t quite live up to the same standard as set by that. Still, colors are bold, there’s a bit of edge enhancement (something that’s immediately noticeable when being spoiled by watching Blu-ray or HDTV all the time) and detail is generally very good.  Fans of the show shouldn’t really mind as these look just about as good as possible.

The included Dolby Digital 2.0 mix won’t win any awards for sound, but for a show like this it doesn’t really matter.  Vocals are crisp and clean, the announcer gives us the updates and there’s no problem there which leaves the rest of the show for the quartet’s laughs and the skits that they do.  The show lacks any sort of surrounds and again, not that it needs them – this is just fine as is.

The third season’s supplements are a bit more robust than the first. The majority of the supplements reside on the first disc with a lone commentary track on the fourth disc.

If you want a show that doesn’t take itself too seriously, then this is for you. This is a guilty pleasure and I’d say it’s my wife’s favorite show. It gets the biggest reaction out of her, though I have to admit that I chuckle at their antics. The lack of the audio commentaries is a bit of a bummer, but I guess it’s the price that comes with fame from the show. For those that are curious, though, Impractical Jokers is certainly a good time. 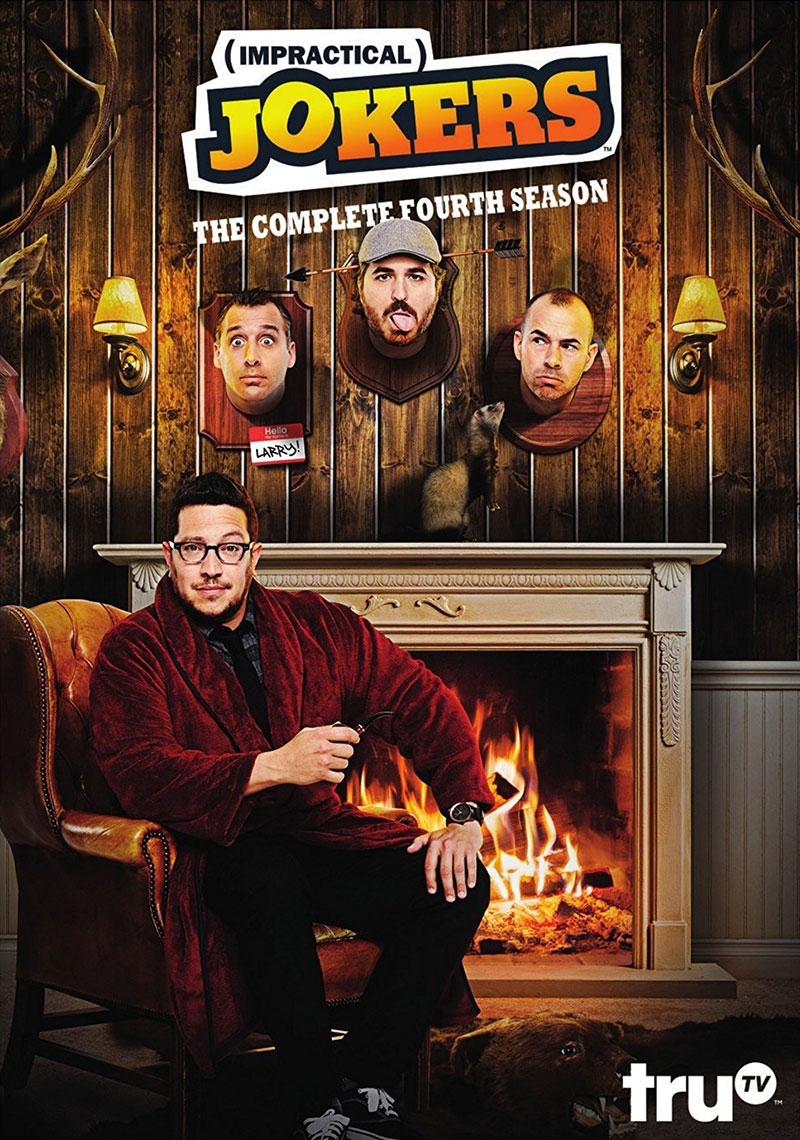