Standard DVD review - Can You Ever Forgive Me? 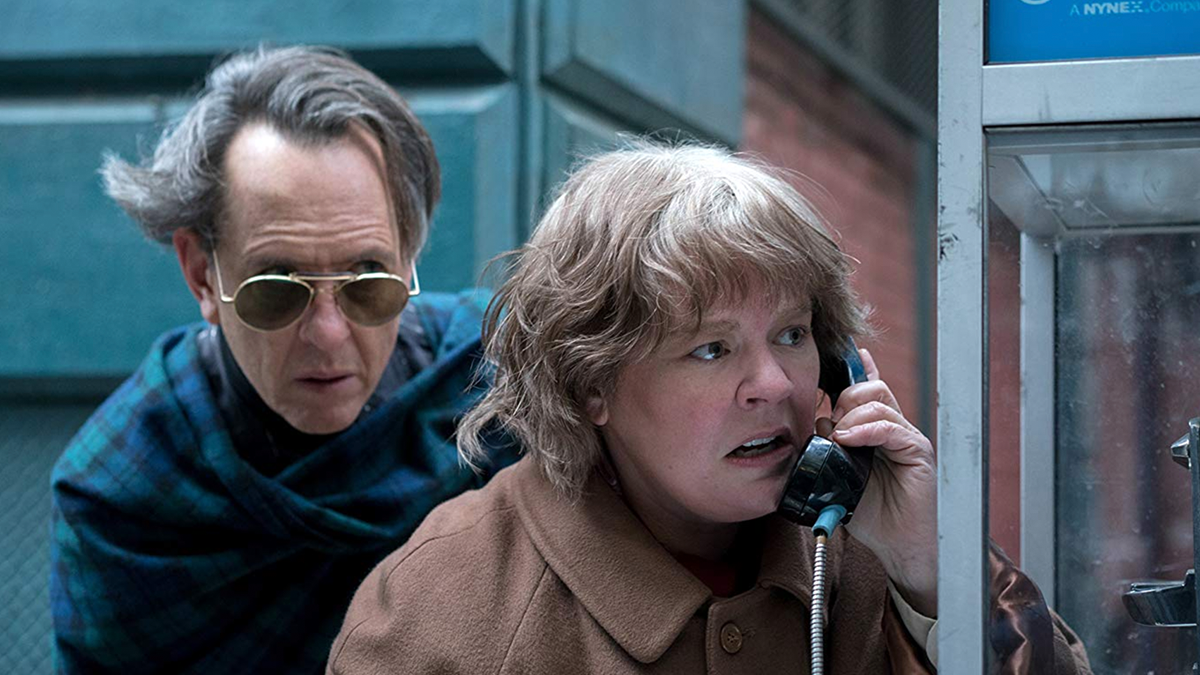 I recently watched an interview with late author/physician Michael Crichton. As a student at Harvard he mentioned that he wanted to be an author, but read where only 200 authors in the United States were able to make a living while writing. So he went to Harvard Medical School instead. As we all know, Crichton managed to find success as an author (Jurassic Park, The Andromeda Strain and Disclosure to name a few), but I was fascinated by that statistic. Focusing more on the issue at hand, I’d never heard of Lee Israel and I certainly didn’t know there was a lot of money to be made with letters from famous authors. Then again, something’s only worth what someone’s willing to pay for it. Israel’s book Can You Ever Forgive Me: Memoirs of a Literary Forger was the basis of the film and in spite of having had a novel on the New York Times Best Seller list, is what she’ll always be remembered for. This is her story.

It’s 1991 and things have been better for Lee Israel (Melissa McCarthy). She lives in her apartment with her cat and has just been fired from her job. She has no money, drinks too much and is working on a biography that, even if published, no one will read. Her publicist (Jane Curtain) hates her and Lee’s behind on the rent. Desperate, Lee sells a letter from Katherine Hepburn for some extra cash. And it so happens that she finds another such letter while doing research. The wheels start to turn and Lee starts fabricating “old” letters from well-established authors and passing them off as the real thing. The money she makes is enough to get her out of the hole, but as suspicions arise as to the letters’ authenticity it jeopardizes her scheme. It’s then that she meets her literal partner-in-crime, Jack (Richard E. Grant), a gay man who’s managed to party his way through Manhattan and is now selling cocaine (and homeless). Lee’s discovered a nice way to make money, but can it last forever?

If you’ve seen Steven Spielberg’s Catch Me if you Can, then you’ll have an idea as to what the movie is about. But Melissa McCarthy’s Lee pales to Leonardo DiCaprio’s Frank Abagnale (in character). And I will admit that I have been looking at this DVD for about a week now, trying to figure out if I wanted to “lower” myself to watch it. But I remembered why I got into doing this site to begin with: my love of movies. McCarthy’s performance is so “not her” that she’s nearly unrecognizable in the role. I can’t remember the last time I saw Jane Curtain in a film, but her part (albeit small) helped make the movie more entertaining. The other half of the duo, Richard E. Grant, gives a genuine and memorable performance as Jack – someone who’s nearly as lonely as Lee. While the film may not move at lightning speed, give it a chance. I did.

Having never been (and most likely will never be) the head of a major Hollywood studio, I try not to question some of their decisions when it comes to the home releases of their titles. I can somewhat understand the motivation behind Fox titles like Family Guy or The Simpson’s being released on DVD only. I was even more perplexed when they released the science-fiction TV show The Orville on DVD. But what we’ve got here is a literal head-scratcher. This is a feature-length film and one that’s nominated for three Academy Awards! And it’s being released on DVD only. I just…don’t get it. But with that caveat out of the way, let me get to how the movie looks…

Can You Ever Forgive Me? is shown in a 2.39:1 AVC HD, whoops, MPEG-2 anamorphic transfer. The film, set in 1991, isn’t splashed with color. Most of the film takes place in an apartment or hole-in-the-wall bookstores. These aren’t exactly the types of places that showcase all the colors your HDTV is capable of. There’s some edge enhancement, something I’ve long since forgotten about with the advent of Blu-ray and 4K discs. That said, the film does have a pretty sleek look and feel to it. Flesh tones seem warm and natural, but on the more subdued side. Contrast is strong, but I felt it could have been a bit better. With only a passing knowledge of cinematography/videography I’d have to say that the color grading profile used here was pretty flat. In other words, it just seems to lack depth. Then again that could be due to the lack of proper resolution. I’m used to seeing my TV and movies in at least 1080p. But if you can get past the fact that this on DVD, it’s by no means bad-looking.

The included Dolby Digital 5.1 mix isn’t challenged here. I’d say that in this day and age, a track like this is tailor made for a film like this. I found vocals to be sharp and crisp, even though McCarthy’s character (in her drunken state) tends to mumble fairly often. The film has a pretty jazzy score, something that took me a while to notice, but once I did – I really enjoyed it. There’s a subtle ambiance at play here, giving the surrounds a bit of room to fill the room. Apart from that, there’s not a lot of action going on with some minor traffic noise and a recurring cat’s “meow” the only things of note. Like the video, it’s passable, but not entirely memorable.

There’ll be some that feel the movie is too slow, but I rather enjoy films like this. It’s nice to see an actor break out of her genre and do something completely and totally original. McCarthy has done this before in St. Vincent, but I’d say this is her best performance to date. I was unfamiliar with the subject matter (the novel), but it’s intriguing to say the least. If you can get past that this is being released on DVD and don’t mind that, it’s a great little film that showcases several talents.