Odin needs assistance, as his eye has been stolen and unless he wants to remain blind, he needs someone to fetch his peeper. But since his usual heroes are unavailable, he reaches out to four zombie vikings to handle his business. These four undead warriors are your playable characters, each with unique traits that make them varied and fun to mix & match. You’re then whisked off to battle countless foes, do side quests, collect loot, and eventually, return Odin’s eyeball. As you progress, you will find new weapons and runes, each able to alter your battles in some fashion. Some offer great power but at a cost, while others add challenge or help you balance your weaknesses. You can also combine weapons and runes in ways that counterbalance the negatives, but again, you lose out on other potential gains. How you choose to equip your spoils will be up to your playstyle and it adds some nice depth. The brawling is fun, but the controls aren’t precise and have a floaty feel at times. Couple this with inconsistent hit detection and some fights can be a real pain. But even with these drawbacks, Zombie Vikings is a lot of fun and most of the time, the combat works as it should.

This is a side scrolling brawler, one of my personal favorites genres, as it can be simple at first blush, but also offer solid depth. Zoink had a fantastic game in Stick It to the Man, so I was hopefully this would offer the same fun, quirky kind of experience. The first thing you notice are a the cool visuals, a stylish look that instantly lets you know this game doesn’t take itself seriously. This is soon joined by some colorful characters, a silly storyline, and fun music. The enemies look just as cool as the heroes, with solid variety and types of attackers. While you can play Zombie Vikings alone, the game really shines when you’re joined by some friends. You can enjoy local coop or online, and you should, as the game is much harder and less forgiving if you’re solo. If you run by yourself, you also miss out on combo attacks and the zombie mashup attacks, both of which add a lot to the experience. You also need friends if you plan to complete the full achievement list, which is kind of unfair. I don’t think you should have to rely on others to get the achievements, but it is what it is. The game can be tough at times, but in a group setting you’ll have better odds and more fair checkpoints. In the end, Zombie Vikings has a lot of potential and is a solid game, but drops the ball in a few places.

The game has silly, but well designed visuals that convey the sense of humor you’ll find from start to finish here. The character designs are fun, especially the playable zombies and some of the bosses, who look quite epic indeed. The visuals have a darker tint in most levels, but there’s a wide variety of visuals from level to level, so it never feels retread or repetitive. Overall, I love the visuals here and found the humor and attention to detail quite impressive.

The sound design mirrors the visuals, giving us that goofy sense of humor in large doses. The sound effects are fun, but also well mixed and effective, while the music is solid too, never feeling annoying or overly repetitive. Not much else I can say here, the game has competent, enjoyable sound design across the board here.

A rock solid game on all fronts, bolstered by some fun visual design elements and a good sense of humor. The controls are a little loose and hit detection isn’t ideal, but Zombie Vikings winds up as quite a bit of fun. But bring friends, especially if you want all the achievements. Recommended. 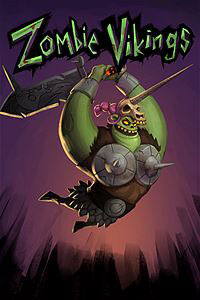