Samurai Onion is a noble warrior, seeking to keep peace in the world and protect the innocent. But he is forced into violent action when he learns an evil plan has been hatched, as the Shogun plots to take over the world! Going against his own leader is no simple decision for Samurai Onion, but he knows he must do what is right. Even his imposing skills might not be enough to defeat the Shogun’s armies however, so he enlists some backup. At his side for this epic battle will be Broccoli Joe, a ninja with a mastery of all kinds of combat tactics. Together the onion and broccoli must fend off countless enemies and face constant peril, both in combat and in navigating dangerous lands. These warriors will also have to solve devious puzzles put in their path, so they will need both mind and body to be razor sharp. As the Shogun’s minions march toward world domination, Samurai Onion and Broccoli Joe are the last bastion of hope. But can even these two powerful combatants manage to face down the seemingly endless armies, not to mention the legendary Shogun?

If you can’t tell from the description above, Yasai Ninja is a game designed with a younger audience in mind. As such, the combat depth and visuals aren’t going to impress most seasoned gamers. The combat is basic, with a light attack that can sometimes be joined by a heavy attack during a combo. As you can imagine, this means most battles are simple “slash until they’re dead” affairs, with some blocking and dodging rolled in. Simple stuff and it doesn’t feel remarkable, but for a hop and bop brawler, the combat gets the job done. As you progress, you unlock various upgrades but I couldn’t figure out the criteria for these bonuses. I was able to secure extra health and new combo attacks, as well as some other unlockables. It would be nice to know the system behind these upgrades, but I couldn’t sort that out here. Most of the game is third person hack & slash with light exploration, battling enemies, solving simple lever puzzles, and looking for hidden scrolls. There are also side scrolling platform sections, which mixes up the action and adds some variety to the levels. Yasai Ninja is a little clunky at times, but I still had a decent time with the game and I think younger players would appreciate it. The price is a little steep given the game’s level of polish, but Yasai Ninja is a solid brawler for younger warriors.

The visuals here are cartoon inspired, but aren’t as bright and colorful as you might expect. The character designs are cute and fun to watch in action, but the graphics aren’t cutting edge. The levels look simple, with some stock items populating the path to add a little spice. This isn’t going to dazzle anyone by any means, but I appreciate the designs of the characters and in the end, the visuals cover the needed basics.

The music is the bright spot here, with some Far East inspired tunes to slash up your enemies to. The sound effects are passable, but don’t really stand out. So much like the visuals, the sound design does what it needs to in order to get by, but won’t turn any heads. 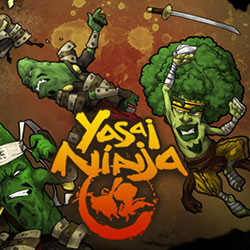