You have no idea where you are or why you’re there, but you’ve just woken up in a strange place. A voice comes through your communicator however, giving you some much needed information. The voice tells you that you’ve been unconscious for about two weeks and you’re on a mission to destroy an alien structure headed toward Earth. While you can hear the voice, the speaker is unable to hear you, so information is limited. The voice belongs to someone at the International Space Station and while you might not remember it, your mission is crucial to save countless lives. You are to explore this alien structure and solve the puzzles within, even as it breaks down around you. The voice tells you that unless you are able to complete this mission, the Earth could be in serious danger. But once you make some progress, a second voice comes through and tells you that the situation isn’t exactly what you’ve been told. Now you push onward, unsure which voice is telling the truth or if you should even trust either of them. Is the Earth in real peril and if not, what have you found yourself in the middle of?

Q.U.B.E. has been released on several platforms since release, but it now hits consoles and includes the Beat the Qlok DLC, which is nice. This game is often compared to portal, since both are first person puzzle solving games, but Q.U.B.E. is by no means some kind of clone. The game tasks you to solve puzzles in seven levels, each of which ups the ante and adds in new twists to the game’s puzzles. You have to use colored items (in an otherwise pure white environment) to progress through the puzzles, with each color representing a different ability. For instance, some blocks can be used as stairs or trampolines, while others can be manipulated in terms of size. The core concept is simple, but Q.U.B.E. finds plenty of ways to keep things mixed up and give your brain a decent workout. I wouldn’t call the puzzles difficult, but some are a nice challenge. So if you want a furiously difficult puzzle game, Q.U.B.E. is more of a middle of the road opponent. I also really enjoyed the story here, as it was well written and performed. So even if you’re not an ace at puzzle games, the story and forgiving challenge make it worth a look.

The visuals here aren’t overly complex, but here is ample detail on showcase. The environments have a sterile, science lab texture, with bursts of color thrown in. So yes, it does remind us of Portal in the visual sense, but there’s enough variation to keep it from being a flat out copy. The visuals work well, adding to the tense atmosphere the story wants to build. So while the graphics won’t blow your mind, Q.U.B.E. is still a good looking game.

The audio doesn’t stand out, but more than gets the job done. The voice work comes across great, which is important since the story is such a core element here. The various sound effects are serviceable, but the game doesn’t have a lot of showcase moments for the sound design. Even so, everything sounds good and the music is quite good as well. 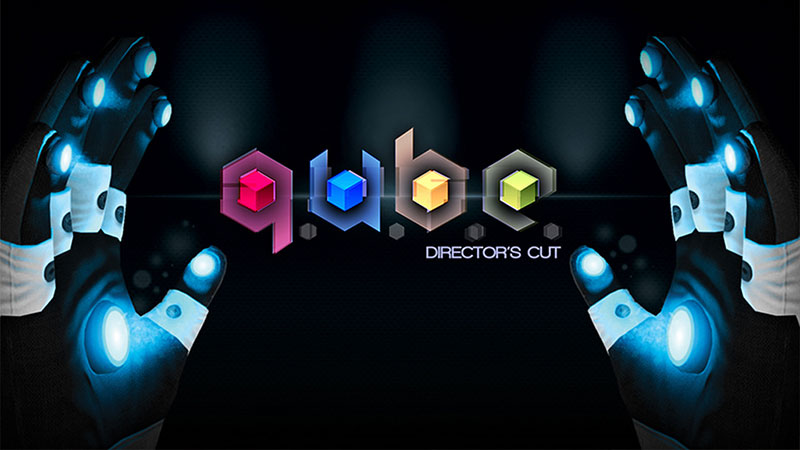