Beatbuddy: Tale of the Guardians (Xbox One)

The world of Symphonia is driven by music, so those who create the best music are beloved and treasured. Prince Maestro wishes to be the most powerful musician in the land, but his skills in creating good music are non existent. He won’t lack of talent hold him back however, so he hatches a plot to make a run at power. First he kidnaps Melody and Harmony, then makes plans to steal all of the best music for himself. It seems as though Prince Maestro truly has created an evil masterpiece, but there is a chance for this nefarious plot to be thwarted. Beatbuddy is on the scene and with a little help from his friend Clef, he will do what he can to end Prince Maestro’s run and free Melody and Harmony. The game tasks you to take control of Beatbuddy and as you might expect, the entire experience centers on music. As you progress through the levels, the music gains elements and becomes more expansive, while also impacting the core game play. At times, you will need to work with the beat of the music to knock off enemies or get past certain environmental obstacles. So make sure to pay attention to the music and hopefully you have good rhythm, as you’ll need it to conquer the levels of Beatbuddy

The game involves flying/swimming around the levels, avoiding environmental traps and such, as well as some puzzle solving that usually revolves around locked doors. I wouldn’t call it a platformer since you don’t really traverse platforms, but you use a similar skill set to advance through the levels. The hook here is that the entire game revolves around music. At the start of a level, the music is simple and sparse, but as you move forward it starts to add elements and soon, a full fledged song is underway. The beat guides many of your actions, especially in regard to enemies and certain environmental obstacles. If you approach and enemy or try to pass an obstacle off beat, you’ll find yourself in a world of hurt. So while most games just use music as a way to cue players to certain things, Beatbuddy puts much more emphasis on the tunes. If you’ve played the Rayman musical levels, this is similar, but also different in some ways. The puzzles tend to be simple and repetitive, but they’re not a drain on the overall fun factor. More variation with the puzzles would have been welcome, however. I also noticed some minor performance issues, but the developers have assured me a patch is incoming to solve those woes. If you enjoy music driven games, Beatbuddy can be a lot of fun, despite some repetitive elements.

The visuals are colorful and well detailed, with a lot of small, subtle touches to take in. Of course, you won’t always have the chance to see them, but they’re present. I love the design elements in the environments, with so much attention to detail and layered visuals. This game might be driven by music, but the visuals don’t take a back seat here at all.

The sound design here is quite good, especially when it comes to the music. The way the audio is meshed in with the game play is cool and without it, the game would obviously be lost. The music really sounds great and the process of building each level’s signature song is a lot of fun. The other audio elements work well also, but the music rises head and shoulders above the rest to really shine here. 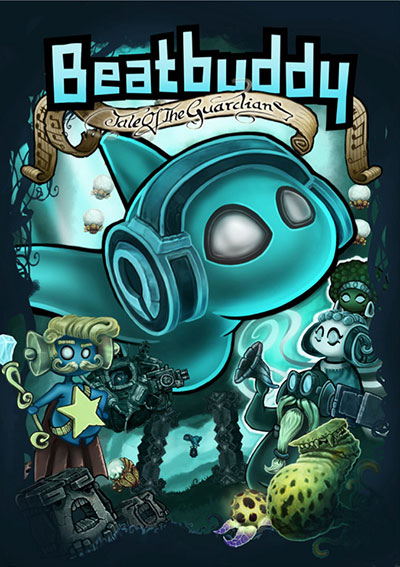