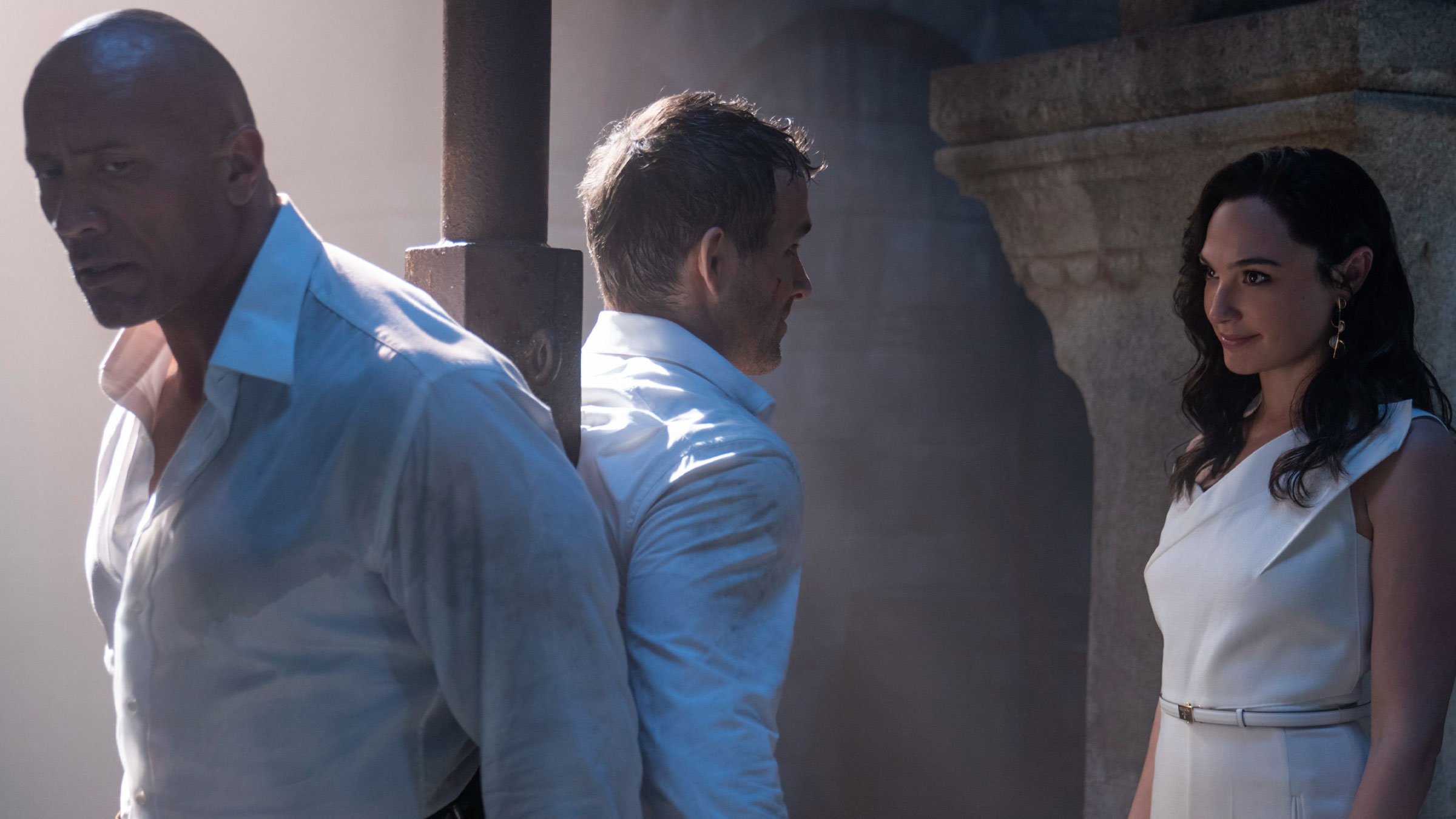 Has it happened? Are we there yet? Is this the point in time where a $200 million full-length feature film is made solely for a streaming service? Evidently, yes it is. This may or may not usher in a new era of how we see films. Yes, we’re all accustomed to watching them on our home theaters, but the days of the opening weekend and box office numbers might (someday) be a thing of the past. Case in point is Red Notice, a hodgepodge of National Treasure, Mission: Impossible and Ocean’s Eleven. Perhaps three of the biggest A-list stars (as of this writing) have some big smiles on their faces as about 30% of the film’s budget went to paying their salaries ($20 million each, folks). I’d be smiling, too. Director Rawson Marshall Thurber, best-known for We’re the Millers, Central Intelligence and Skyscraper has his work cut out for him in this heist film. Did it steal our hearts? Let’s find out.

John Hartley (Dwayne Johnson) is an FBI agent. He believes that Nolan Booth (Ryan Reynolds) has set out to steal one of three priceless eggs that once belonged to Cleopatra. He’s right. However another skilled thief, the Bishop (Gal Gadot) has her eyes on the prize as well. She steals the eggs from Booth and manages to frame he and Hartley for the crime in the process. Nice. The duo end up in prison and manage to work together not only to escape, but to prevent the Bishop from locating the third egg. Of course, nothing is as easy as it seems as as the trio gallivant around the globe, we’re inclined to wonder if the eggs might just be a mcguffin. (spoiler: they are).

Red Notice is all about suspension of disbelief. There’s no way that two people can break out of so many prisons, wind up in the exact same place in the world as the others (with impeccable timing) and look good in the process. But this is a movie, not a documentary. Johnson is his usual self, stern, muscles bulging and intense. Reynolds essentially plays the same character he played in Deadpool (or Blade: Trinity if you prefer) albeit it a less foul-mouthed and much more attractive version. And Gadot, is, well…Gadot. She’s sexy and she knows it. If all of this sounds good, then you’ll have a fun time watching. Don’t expect to have your mind blown and depending on how this does there may or may not be a sequel (despite the obvious set up). I had a good time. If you can throw logic out the window, you will too.

The movie will have you think that it took place all around the world (the city overlays had me confused since there were so many), but after a quick look at IMDb’s “trivia” section, it appears that most of it was shot in Georgia. That aside, this does look the part and given the film’s ample budget, it should. But it’s far from perfect. There are some obvious uses of green screen and the CGI effects left a lot to be desired (the bull, anyone)? Of course, every scene has at least one of our three starts in it and they all look, as expected, glamourous. Detail is top notch, black levels are on the mark and I didn’t exactly have a lot to complain about, but I also felt it could have looked a bit better. Who knows – if we do get a disc release of this in the future, I’d check it out again for comparison’s sake.

I’ve said in previous reviews that I’m amazed how a streaming service can give us Dolby Atmos. I don’t know why that continues to baffle me so much. At any rate, that’s what we have and while it sounds good, I’ve heard others that would put this to shame. Still, there was ample use of the surrounds and LFE. I found the vocals to be sharp and crisp, as always Dwayne Johnson’s booming deep voice takes front and center (pardon the pun). Truthfully, this isn’t really one you watch for the technical merits, but it’s nice to have a good-sounding mix to back it up.

Unless I totally missed something on Netflix, I didn’t see any extras.

Red Notice‘s saving grace is that it doesn’t take itself too seriously. Then again none of Thurber’s films seem to. And I’m OK with that. I found myself laughing out loud at several points during the film. Yeah, it won’t win any awards and I’m surprised that this $200 million dollar film employs rather modest production values, but hey – I had fun and I could find myself watching it again. If Ryan Reynolds’ sense of humor (or his looks) are up your alley, then you’ll likely have a good time. The same goes for Gal Gadot. And since Dwayne Johnson is in every movie, we’ll give him a free pass.