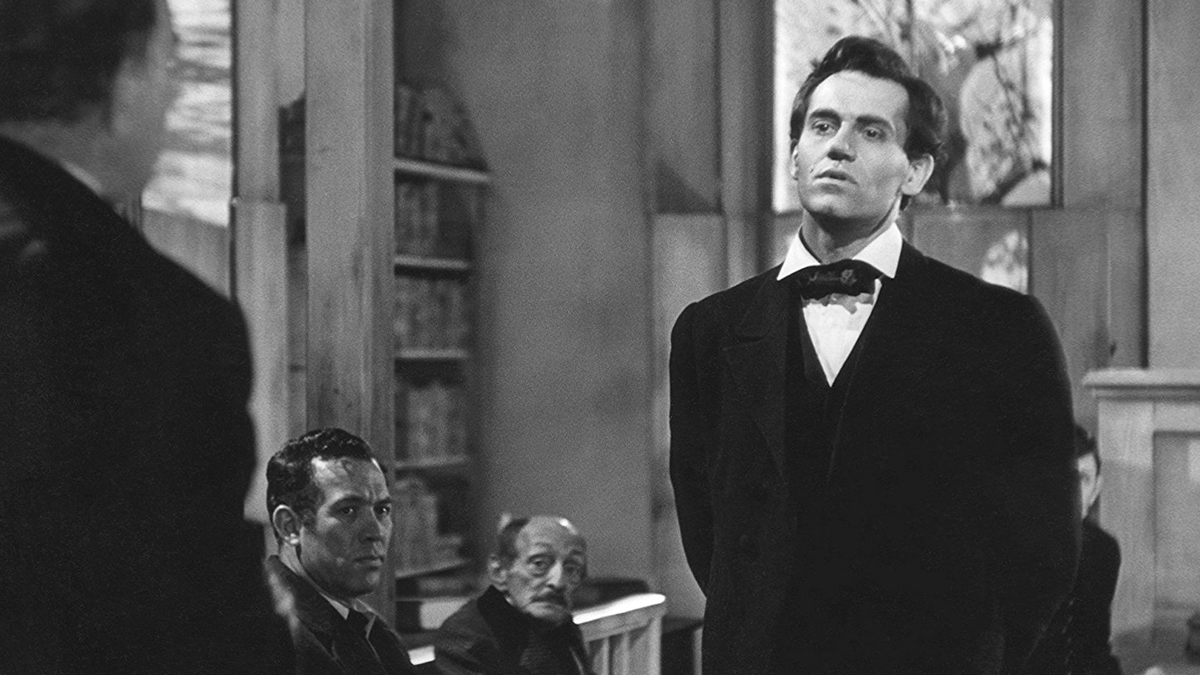 Criterion Collection has had a pretty impressive year this year with such high-profile releases as Barry Lyndon, Election, The Philadelphia Story, and Twin Peaks: Fire Walk With Me. Aside from issuing these new releases of some classic films, they have also continued to go through their backlog of titles that previously were only available on DVD and giving the, brand new transfers on Blu-ray. Notable titles have included great new transfers of Le Samouraï, Monterey Pop, and their brand new transfer of the John Ford classic Young Mr. Lincoln.

The film begins with young Abraham Lincoln (Henry Ford) living in New Salem, Illinois in 1832. Abe is helpful around town and typically accepts trade for his help. In one trade he ends up with some books for his services including a book on law. As he reads the law book, he finds himself thinking that it makes sense and considers pursuing it as a career. Meanwhile, Abe develops feelings for a young woman named Ann Rutledge. When she dies unexpectedly, Abraham decides to pursue the law career that they had discussed. Moving to Springfield, Illinois, Abraham sets up shop in town and accepts any case he can get including a dispute between two farmers. Lincoln meets Mary Todd and is struck by her beauty. While he is developing feelings for her, a scuffle between three men leaves one killed by stabbing and two brothers accused of murder. Lincoln intervenes on behalf of the accused to be their defender and keeps them from getting lynched through humor and reliance upon Biblical teachings. Their mother had seen it all, but is unwilling to say who stabbed the dead man. The film follows the courtroom drama and also serves as a solid origin story for one of our country’s most beloved presidents.

Like some other John Ford films, the film is deliberately paced and the first half is a bit slower than the second half. Once the courtroom drama begins though, the film coasts easily through the whole last half of the film. I must be honest and say that I have not seen many John Ford films, but I think that this film is a worthy entry into the Criterion Collection canon. It boasts a thoughtfully constructed screenplay by Lamar Trotti that not only shows the character of Abraham Lincoln, but also goes a long way toward letting the viewers understand the hardships that affected Americans as America continued its Western expansion. Abe Lincoln endured so much death in his lifetime that it makes good sense that he became a great leader of men when their mortality hung in the balance. The script, despite being a factionalized account of Lincoln’s early years, does a great job of bringing dignity to the proceedings. The film boasts an absolutely fantastic performance from Henry Fonda who, thanks to a prosthetic nose, looks almost exactly like Lincoln. I have always liked Fonda, and he has no trouble taking good care of the material.

I had started to watch this film a few years ago, grew sleepy, and never returned to it until today. I am glad that I have gone back to rewatch the film, because it is definitely deserving of its classic status. Criterion’s new 4K transfer also is impeccable, so if you are a fan of the film, I would just grab it.

Criterion are known for their dedication to sourcing the best possible transfers of the film that they release. In this case they have created a new 4K transfer in the original aspect ratio of 1.37:1 in conjunction with Twentieth Century Fox from an original nitrate print of the film and when necessary a 35mm fine-grain print when scenes were damaged or missing. The new pristine 4K digital restoration causes the film to look the absolute best it has ever looked. Black and White films benefit heavily from these new 4K transfers, and despite the film looking a bit bright, fine detail is truly magnificent. Criterion also have done an extraordinary job on removing any dirt or debris. The results are very impressive. Like all Criterion films, watch it on a big Ultra HD screen to really get the impact of the work they have put in.

Criterion Collection have provided a reference quality Linear PCM mono track that they mastered at 24-bit from the original magnetic tracks. Any evidence of hiss, hum, thumps, or crackle was digitally removed. The track itself is in great shape and dialogue is clear. The film has a fairly robust score throughout that can be about as subtle as a hammer and is not as silent as you might expect given the subject matter. Like other Criterion releases, fans should be very pleased.

I had tried to watch this film a few years back and had gotten tired and never gone back to it. I am glad that this new release of the film brought me back to it. This is a great older film with a fantastic performance from Henry Fonda under the direction of John Ford. The new 4K transfer via Criterion has given a new lease to the film, blowing away the previous DVD release with additional well-thought-out special features. Fans of classic films will find themselves in good company with this film. This was good enough that now I will be forced to tackle some more of John Ford’s films. Recommended.