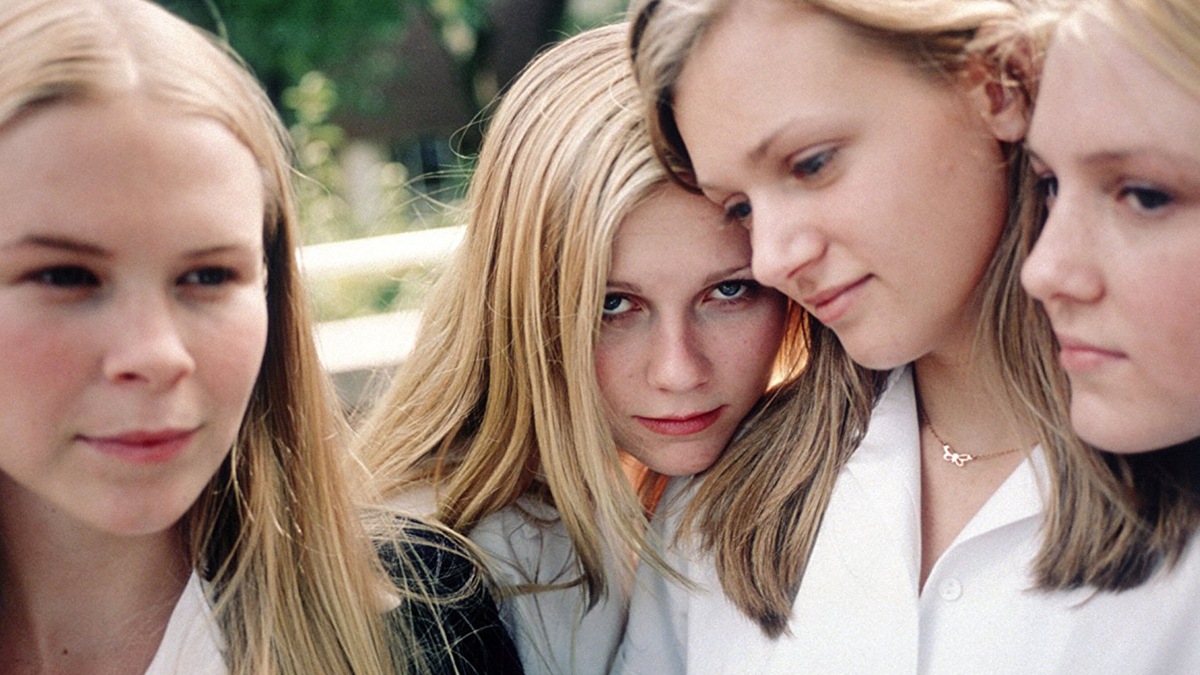 In the realm of their neighborhood and school, the five Lisbon sisters were the focus of almost all eyes. The girls range a few years in terms of age, but all of them were beautiful and much admired, although usually from afar. Mr. Lisbon (James Woods) and his wife (Kathleen Turner) are not cruel or abusive parents, but they keep their girls under a tight lock, which means they have little contact outside their home. This adds even more mystery and attraction to them, at least from the eyes of all the young men who spend all their time watching and discussing the Lisbon sisters. To these young men, the girls are almost like visions, as they know the girls are real, but they are mystified by them and that makes them want to know even more about them. After one of them takes her own life, the parents ease up on the girls and after some time passes, they’ve all agreed to attend the school prom. It seems like these girls might finally reveal the secrets behind themselves, but then a chain of event begins that will alter the young men’s lives forever.

I have read the novel The Virgin Suicides and simply loved it, so I was skeptical how well it would turn out as a film. Once I heard Sofia Coppola was penning the screenplay and directing, my hopes sank even more, but I knew I would end up seeing the film in the end. So I went to see it and I was very pleased, as is one of the better films in recent years. The source material is excellent and thanks to Sofia’s steady screenplay, most of the charm and emotion is well replicated on screen. With Kirsten Dunst, A.J. Cook, Hanna R. Hall, James Woods, and Kathleen Turner all in fine form, I found no room for complaints with the performances either. I wasn’t sure how a couple of the performers would pan out, but I was pleased with the performances in the end and I think the casting was more than effective. Add in a dreamlike visual approach and needless to say, I was spellbound by The Virgin Suicides. I give this film my highest recommendation and though the disc has few supplements, it still more than worth the asking price.

This film was directed by Sofia Coppola, who also wrote the screenplay, which was based on the novel by Jeffrey Eugenides. I know a lot of people doubt Sofia’s skills and with some good reasons, but with The Virgin Suicides, she has all but erased her so/so past in cinema. She is able to direct like a master here, even though this was only her second film behind the camera, which is very impressive. Sofia and her crew use some stunning visual choices to enhance the film also, most of which work very well here. The novel this film was based on was amazing and I had my doubts here, but I think Sofia has more than delivered the goods. I hope to see more from her in the future and until then, I will be watching this one over and again. At the head of the cast here is a lust soaked Kirsten Dunst (Drop Dead Gorgeous, Interview With The Vampire), who does her best to turn on all male characters and viewers. Her role demands that sort of thing though and in the end, I think she comes through just fine. The cast also includes Chelse Swain (Tart), James Woods (Any Given Sunday), Josh Hartnett (The Faculty), Hanna R. Hall (Forrest Gump), Kathleen Turner (Serial Mom), Leslie Hayman, Danny DeVito (Screwed), and A.J. Cook (Teen Sorcery).

Originally shot in a 1.85:1 aspect ratio, the film has been trimmed down a bit for this Criterion release. The film has a dreamy and etherial look to it (somewhat mirrored in Coppola’s 2017 remake of The Beguiled). Those elements come off in fine form here also, which ensures that the film retains the intended visual sparks. The colors look solid here, though with all the various tints, they don’t have a lot of time to shine in their normal forms. In any case, the hues appear as they should, which is what counts in this case. No problems with contrast either, shadow depth is dead on and no black levels flaws are evident. I am very pleased with this transfer, as it makes sure the film’s lush visuals look just as they should.

The DTS HD Master Audio soundtrack is probably best-know for the score and somewhat melancholy mood it sets. The surrounds aren’t used to overwhelm the viewer though, instead to immerse the viewer within the film, which is just what happens in this case. The directional use is quite good and on the whole, this is an active and effective mix. The film’s beautiful score also shines in this mix, drawing us even further into the film’s atmosphere and I like that. The dialogue comes across well also, no volume or clarity issues arise in the least.

It’s been nearly two decades since the film debuted and it’s one I watch every few years. It’s amazing and, dare I say, mesmerizing. The film is loaded with an A list cast, features some great performances from Kirsten Dunst and Josh Hartnett and has a visual look and feel that is hard to describe. Criterion’s treatment is, of course, second to none so fans will want to snatch this one up.