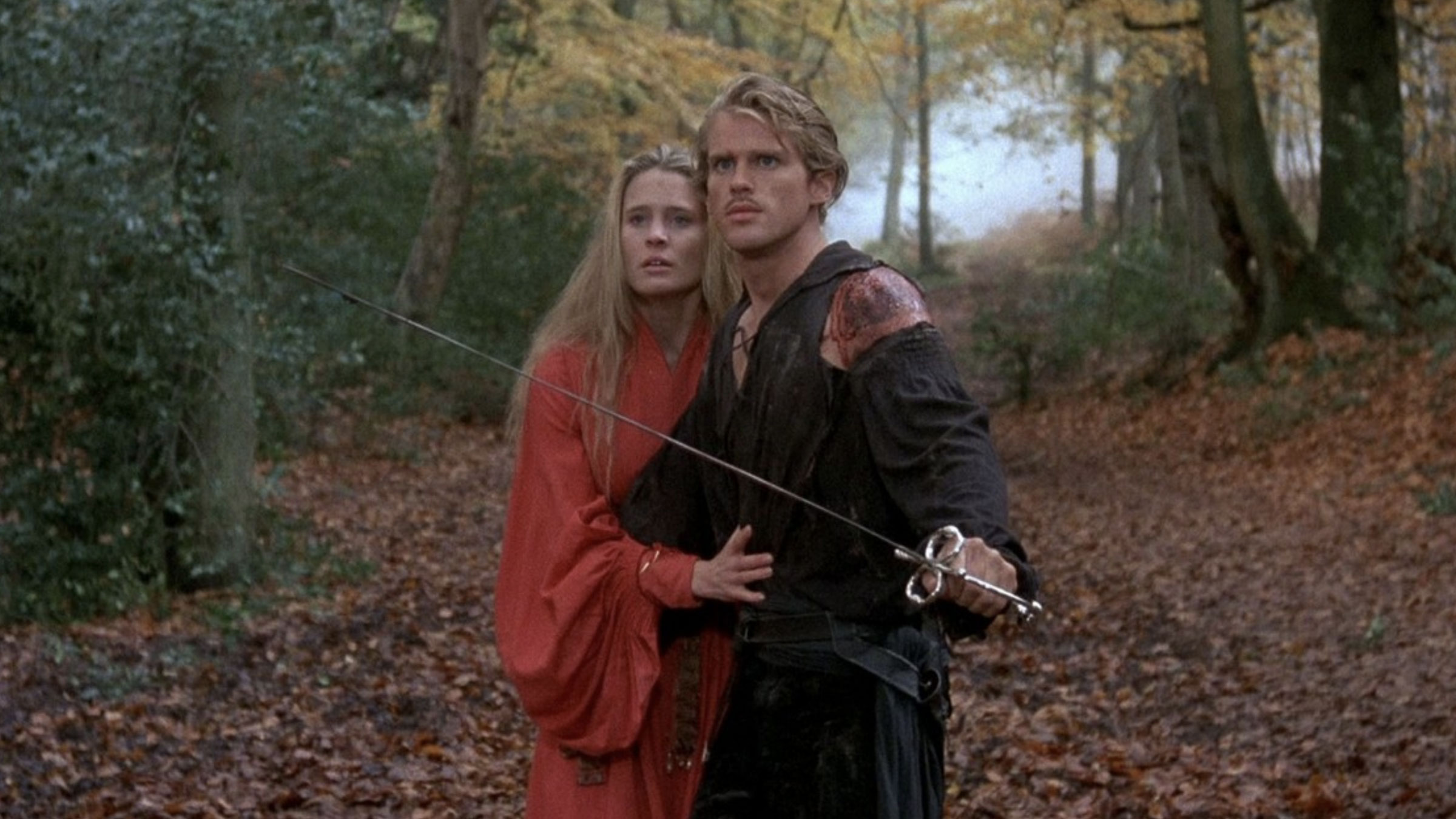 As he lays in bed home sick from school, a young boy (Fred Savage) is visited by his grandfather (Peter Falk), who hopes to cheer up his grandson. He plans to read him a story, one called The Princess Bride, but the boy is reluctant, only to agree when he is told is has ample action within. The story follows a farm hand named Wesley (Cary Elwes), who has romantic feelings for a beautiful woman named Buttercup (Robin Wright Penn), but he lacks the money to wed her. So he takes off to make his fortune, but when he doesn’t return, Buttercup is promised to the repugnant Prince Humperdinck (Chris Sarandon). When Buttercup is then kidnapped as part of a plot to create tension between two powerful countries, a mysterious masked man embarks to rescue her. Will Buttercup be saved and even if so, will her heart ever heal from the loss of Wesley?

An instant classic, The Princess Bride is a wonderful movie. This is a film that the entire family can watch and fall in love with, a smart and wildly fun production. The younger viewers will be pulled into the fairy tale world, while adults will appreciate the writing, which is superb. The Princess Bride is simply loaded with quotable lines, delivered by characters that are memorable long after the credits roll. I haven’t seen a lot of movies that can entertain viewers of all ages in such a brilliant manner, but this movie succeeds on all fronts. There is action, adventure, romance, comedy, drama, and pure magic, all tied together with skilled efforts on both sides of the camera. The Princess Bride is a fantastic movie that will stand the test of time, so seeing it in such a lush presentation is a true treat. So whether you’re a new viewer or this is your five thousandth trip into this magical world, The Princess Bride on Blu-ray is highly recommended.

The Princess Bride has been on just about every home video format available and this is now its third (maybe fourth?) incarnation on Blu-ray. But this time it’s different because it’s now in the capable hands of The Criterion Collection. As we might expect, there was a slew of technical information regarding this new 4K transfer, for those who like it and/or want it:

This new 4K digital transfer was created in 16-bit resolution on a Northlight film scanner from the 35mm original camera negative at Deluxe in Burbank, California, and restored using the 1997 Criterion laserdisc master, supervised and approved by associate producer Steve Nicolaides.

I’d forgotten that this title had been part of Criterion’s LaserDisc collection, but this only adds more to the story. First off, I noticed a richer color palette, finer texture and a depth that I hadn’t experienced before. Colors seemed to have a bit more “pop” to them and even tired-looking scenes had a sheen to them that couldn’t be ignored. There is a fine layer of grain in some of the outdoor scenes (the majority of the film is outdoors, or in the forest) that give the image a very natural-looking quality to them. Honestly, I could go on, but suffice it to say that this is, hands down, the best the film has ever looked. If Criterion ever starts issuing 4K discs, I can only imagine how good this one will look. Perfection.

The DTS HD Master Audio track is, again, the same thing that was included on the previous Blu-ray.  Having said that the vocals are crisp and clean.  The surrounds don’t get too heavily involved, but they are there for some added emphasis.  The front stage handles most of the action and does it well.  There are a few times when the mix sounded a bit brittle, but they’re few and far between.  As we might expect, this is the best the movie has ever sounded. Short of adding a DTS X or Dolby Atmos mix on this disc (which Criterion does not do), I can’t imagine this movie sounding any better than it does here.

This is where the disc really shines. We get a lot of material from the previous DVD edition(s) as well as some new content created exclusively for this release. Let’s get started.

Criterion has taken a classic, popular film, corralled some of the supplements from their 1997 LaserDisc as well as some from other versions, and even made a few new additions. If that wasn’t enough, the visual 4K restoration is second to none. There are few discs out there that get a perfect score, but this is one of them. This belongs on every shelf.