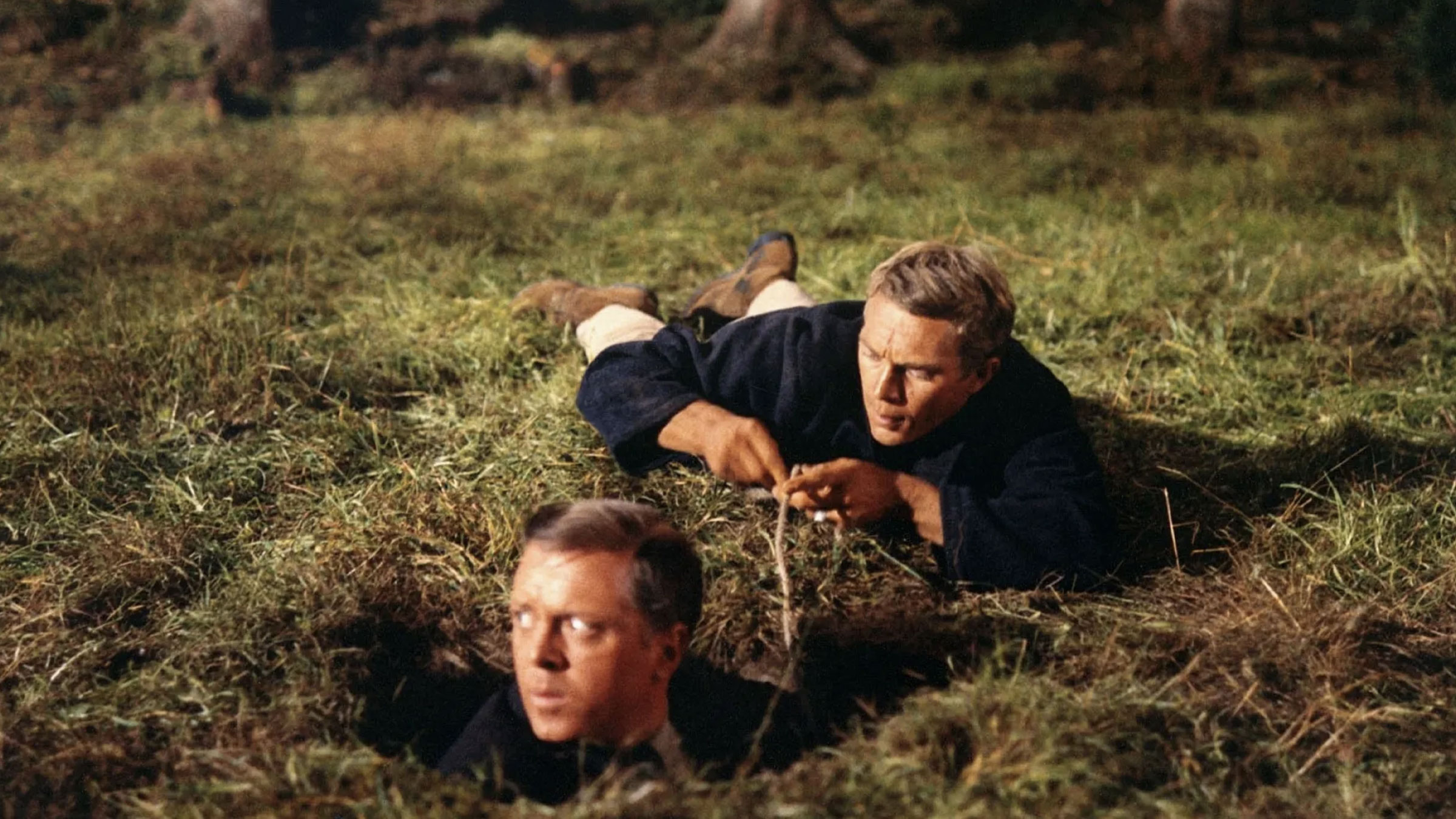 The German forces have captured numerous Allied soldiers, which means prisoner of war camps are often loaded. But the population sometimes drops, as escapes are on the rise and no end is in sight. This concerns the German forces, as escapes mean lost prisoners and of course, that is bad news. In an effort to ensure the prisoners don’t escape, a special camp is designed that is deemed impossible to escape. A group of Allied prisoners is sent to this new camp, the kind of prisoners who would love to make a break. So the camp is filled with people with skills in the art of escape, but the Germans are confident in their new camp. The prisoners don’t feel helpless however, not by any means. Instead, plans have been unfolded to not only allow a few men to escape, but for hundreds of men to leave the camp. The plan is bold and calls for extreme measures, but if anyone can escape, this group has the best chance. The work soon begins on an intricate, large scale tunnel, which is the first phase of the escape process. The tunnel must be worked on in secret, which means time and resources are slim at best. The prisoners have to keep one step ahead of the Germans, in order to make the plan a success. But can the prisoners enact this bold plan, or is this camp truly impossible to escape from?

An incredible motion picture based on incredible real life events, The Great Escape is simply a “great” movie.  The film itself is a well crafted, memorable picture that more than warrants a place in any film buff’s collection. As with any movie based on real life events, some liberties are taken to enhance dramatic tension, but there is still a solid sense of realism. I do think the approach to conditions in the prison is rather soft, as we don’t see the cramped, dirty, and violent side of life within the complex. That is an oversight to be sure, but the movie does so much right, you can’t discount it on the whole. If nothing else, the cast alone demands attention, with Steve McQueen in the lead with a dynamic performance. But is he surrounded by talent, with such folks as Donald Pleasance, Charles Bronson, James Coburn, Richard Attenborough, and numerous others. In other words, a well acted and well written motion picture and with John Sturges on deck, you know the direction is superb as well. This movie is highly, highly recommended and so is MGM’s new Special Edition, so don’t hesitate to nab this release.

This is perhaps his most famous role and with good reason, as Steve McQueen is simply excellent in this picture. McQueen had more than a small impact on the production also, as he made some requests and his terms were met. He wanted the script to have more time for his character and of course, he wanted to show off his motorcycle skills. A close friend of McQueen’s was the driver for the famous motorcycle jump sequence, but McQueen more than compensates with his most powerful, effective performance. He more than proved his dramatic abilities, as well as furthered his claims as a potent action & adventure star. A movie like The Great Escape needs a man with the kind of presence to get an audience behind him and without question, McQueen could win over an audience in an instant. He never seems overshadowed by his numerous costars either, nor does he try to steal the spotlight when he shares the screen. That is all a testament to his skills, so this is an all around highlight of McQueen’s career.

It’s easy, very easy actually, to become spoiled in regard to how some films look these days.  Yes, it’s easy when the films are new to the format but it’s another thing all together when they’re decades old like The Great Escape.  Truthfully, this title has never really looked that great on any format, be it VHS, LaserDisc or even the DVD’s that came out years ago.  But there’s always a warm feeling I get when I learn that Criterion is involved. And the good news is that the AVC HD transfer does offer improvement over the previous Blu-ray edition.  This was sourced from masters owned by Quentin Tarantino and Martin Scorsese. Yes, really. To get one thing straight, this film will never look brand new. It does have a few problems that couldn’t be fixed unless you went and reshot the film. And that’s impossible. But colors have a bit more pop, black levels are more consistent and everything seems to be a bit smoother overall. Simply put, this is the best this movie has ever looked. Below are some technical notes as to how the new transfer was done.

This 4K digital restoration was undertaken by MGM. A digital transfer was created in 10-bit 4K resolution on an ARRI film scanner from the 35mm original camera negative at EFILM in Los Angeles. A 35mm interpositive was also scanned at Deluxe in Sherman Oaks, California. Original Metrocolor prints of The Great Escape are badly faded, making accurate color references difficult to find. Color references for this edition included an original 35mm dye-transfer print from the Academy Film Archive’s Technicolor Reference Collection, a 35mm acetate print owned by Martin Scorsese, and a 35mm acetate print owned by Quentin Tarantino.

This Blu-ray sports a DTS HD Master Audio track as well as the films original mono mix. I caught a few instances of some more robust sound, but by and large this is the exact same mix.  The film is very dialogue driven with some ambient effects thrown in for good measure.  The ending sequence with McQueen on the motorcycle does, admittedly, sound pretty good but again it pales in comparison to any modern day release.  Still Elmer Bernstein’s memorable score has never sounded better than it has here, so that’s good to hear (pun fully intended). Purists will want to go for the mono mix, but if you want more than one channel doing the work – you’ve got options.

There aren’t many three-hour films that I can sit down and watch and never look at my watch. And, as you may have guessed, this is one of them (JFK, The Right Stuff and Titanic are a few others). Criterion has done it again by adding some new supplements, unearthing some old ones and giving us a much improved picture over the previously-released Blu-ray. Any movie-lover will need to have this one on their shelf.